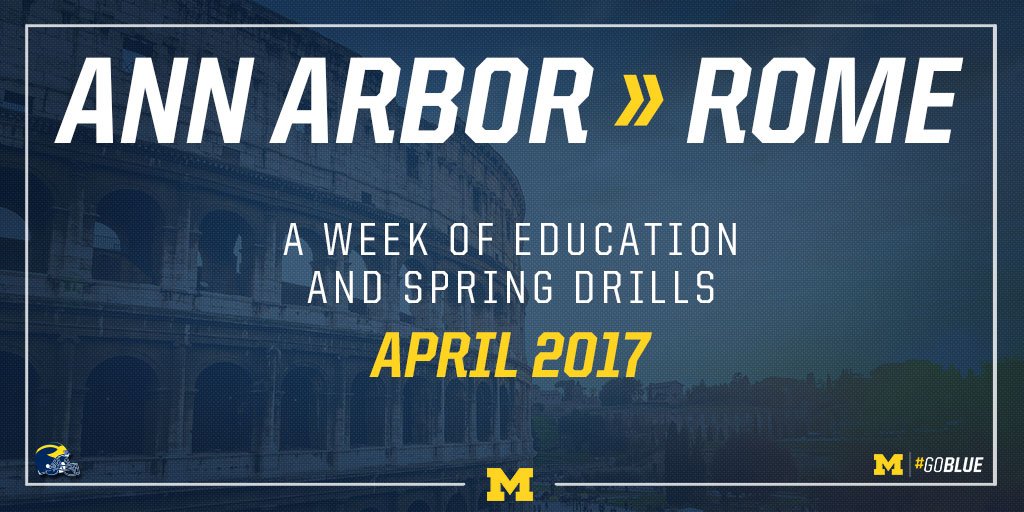 Jim Harbaugh is bringing the Michigan Wolverines to Rome. No, not Rome, Georgia or Rome, New York, but Rome, Italy.

We are headed to Rome for a week of education and spring drills.

The Wolverines football team announced on Monday that the entire team would head to Rome in April for a “special educational and football experience.” The Wolverines will use three of their 15 practices in Rome, training at the grounds of AS Roma of Italy’s Serie A.

“We were looking to provide our student-athletes with a great educational, cultural and international football experience,” said Jim Harbaugh, U-M’s J. Ira and Nicki Harris Family Head Football Coach. “I am excited that our student-athletes will be able to take advantage of this amazing educational opportunity, be exposed to another culture, and be ambassadors for the United States and the University of Michigan during our visit to Rome.”

It’s pretty great to see Harbaugh taking the Wolverines abroad, but let’s call a spade a spade — this is a paid vacation for Michigan players. Sure, they’ll have a few practices along the way, but that’s essentially a cover-up to allow the team to go Rome without violating NCAA rules. In what world is a paid vacation for players allowed? Jim Harbaugh’s, apparently.

Hilariously enough, a Michigan beat writer tweeted last week about whether or not the NCAA would have cared if Harbaugh brought the Wolverines to Europe instead of Florida.

A real Q: If Jim Harbaugh took his team to Europe (hmmmm) or something last year instead of Florida, would the SEC have ever complained?

It’s like Harbaugh is inviting the NCAA to investigate him. I’m sure what he’s doing is all legally allowed, and just teetering on the line long enough to frustrate the NCAA. Harbaugh is a master. Although I’m sure players would rather get paid actual money for their participation in football over a free trip.

What’s next for the Wolverines?