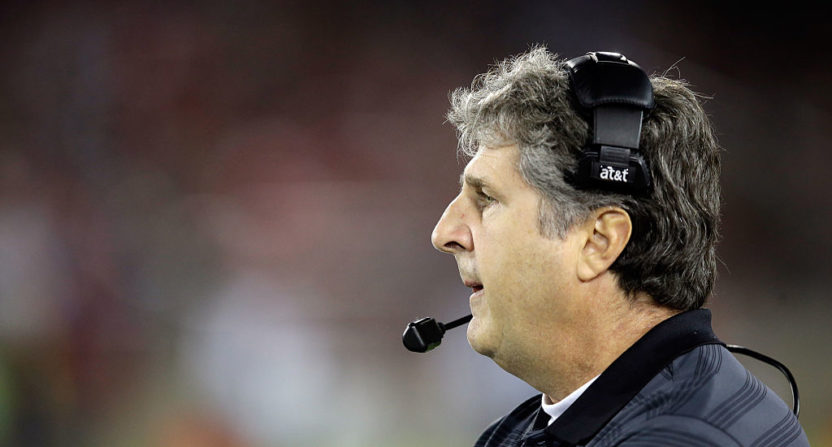 The grudge match between Mike Leach and Texas Tech continues to this day with the former head coach of the Red Raiders going all out to get the money he says the school owes him.  As Leach continues to wage war through the court system to get paid by Texas Tech, the current head coach of the Washington State football program has reportedly hired an investigator to dig up as much dirt as possible on members of the Texas Tech board of regents and other school officials.

According to a report from USA Today, Leach has hired Dolcefino Consulting in Houston, as Leach is prepared to play “hardball” and get his hands dirty with Texas Tech. We should expect nothing less from the coach who spends so much time sharing his grievances about Texas Tech like every day is Festivus. Leach probably has his own pole he sits by as he fires off his rants about Texas Tech and their unwillingness to pay Leach the $2.5 million he says he is owed from his contract in 2009.

“If they want to be weasels and not pay the guy, then they won’t pay him,” Wayne Dolcefino, the head of the consulting firm, said to USA Today. “But we’re going to look under every nook and cranny. We’re starting with phone records.”

Leach was fired by Texas Tech in 2009 amid controversy surrounding the alleged mistreatment of a Texas Tech football player, Adam James, who is also the son of former ESPN analyst Craig James. Leach’s legal fight against Texas Tech has been turned down by the state supreme court once, but Leach is determined to continue his fight until he gets what he believes he is owed by a university that cut him loose without proper cause.

Over the weekend in Lubbock, a group of supporters for Leach gathered outside Texas Tech’s stadium prior to a home game to show support for Leach and demand Texas Tech pay the former coach the money he is pursuing.Let this all be a lesson to Washington State. If ever there comes a time when you feel a change in head coach should be necessary, make sure to cut ties as politely and respectfully as possible, because Leach knows how to hold a grudge if you do him wrong.

Leach is not one to go away quietly. Stay tuned to see what dirt he digs up, because he will undoubtedly share it when he feels it is necessary.