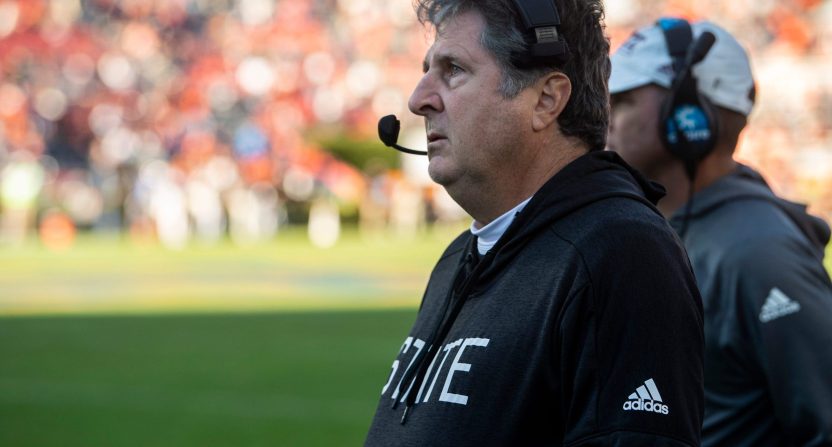 Mike Leach hasn’t kept it a secret that he wants an expanded College Football Playoff. While some want to keep it at four teams, others want to expand to eight or maybe 12. Leach, on the other hand, once said he wanted to model March Madness and have a 64 team playoff.

The Mississippi State head coach is on an island with his 64 team suggestion but he’s certainly for any expansion and isn’t above using something seemingly unrelated like the Kentucky Derby to make his point.

As 80/1 longshot Rich Strike shocked the world to win the Kentucky Derby, Leach tweeted about the race using it as a “good example” to have an expanded College Football Playoff.

That horse winning the Kentucky Derby today, is good example of why an expanded college football playoff is needed. That horse hadn’t won all the races leading up, but it got its chance and that’s what happened.

Leach points out that while Rich Strike “hadn’t won all the races leading up” and just got in the race a day or two before, he made it count when he needed to and raced his way into horse racing immortality. And if a college football team was in Rich Strike’s position, they wouldn’t come close to having a chance to win the tournament.

There might be an argument to expand the field from four given undefeated teams have sometimes been excluded, but expanding it to include the Rich Strike’s of the college football world would water down the regular season so much that college football will lose a lot of its charm. Just look at college basketball. Sure, we love March Madness but only the diehards watch regular season college basketball. Because with 68 teams, almost all the top teams are sure to be in.

In the 148-year history of the race, only Donerall (91/1 in 1913) was a bigger underdog than Rich Strike. Point is, don’t ruin a good thing by doing something just because a longshot will win once every 100 years.