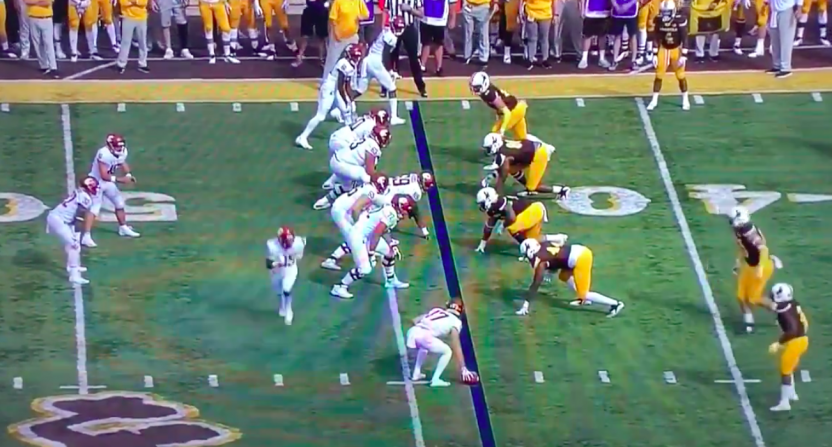 Trailing 19-13 with roughly eight minutes left in their game against Wyoming this weekend, Washington State’s offense got into a rather strange formation.

All eleven players bunched up between the left hashmark and sideline. Center Kyle Sweet set up on the hashmark far away from the rest of the linemen and snapped the ball with one hand at quarterback Gardner Minshew, who was standing diagonally to Sweet. Instead of letting the ball to get Minshew, running back James Williams snatched it out of the air and then proceeded to gain five yards.

If that wasn’t strange enough, WSU lined up the exact same way on the next play and did it again, this time gaining four yards.

By the way — here’s that bananas formation WSU ran for a couple of plays. Mike Leach is at it again … pic.twitter.com/qz4C48epEY

Washington State went on to win the game 41-19. While this kooky play wasn’t the reason they won, it certainly got everyone’s attention and made people wonder where head coach Mike Leach had come up with it. Turns out, he had some help from Microsoft. Really.

“I know this engineer from Microsoft and he likes football and says, ‘Hey, have you ever thought about this?’” Leach said. “One of those idea guys. Very brilliant guy. He’s got a lot of ideas. So he came up with a bunch of formations and pretty good ideas and said they’d be interesting. Got me thinking, so basically on the enthusiasm and energy of some of his thoughts, what he saw, we thought we’d mess with it and it was fun for our players and things.”

As for what the play’s name is…Leach calls it “Big Gulp Left.”

Been working with a Microsoft engineer and Coug grad who has some innovative ideas. Stay tuned. We call this one Big Gulp left, named after a friend of mine. https://t.co/jui2PvlYul

That sounds fairly random, but because this is Mike Leach we’re talking about, it’s anything but. Leach said the naming is a homage to “a friend of mine” but that “friend” is actually USA Today columnist Dan Wolken, whom Leach got into a tiff with over the summer.

Back in June, Leach tweeted out a heavily-edited YouTube conspiracy video of a Barack Obama speech and then asked people to share their thoughts. It wasn’t clear what, exactly, Leach wanted because when people started calling out the video as being fake, he started deflecting blame and responsibility to sharing it. The whole thing came to a head when the USA Today’s Dan Wolken later wrote a column titled, “Mike Leach’s tweet of an anti-Obama hoax showed why many schools won’t hire him.”

Why has Mike Leach gotten stuck at a far-flung college football outpost, away from the bright lights of a major program? Schools are afraid he’ll embarrass them like he did last night on Twitter https://t.co/Znpl1gebSB via @usatoday

That then led to Leach to launch a diatribe against Wolken, calling him out to debate…something.

So a guy, who no one knows, Wolken, has an ax to grind. I’m not sure who he is, but at the risk at building his career, I am willing to debate him, anywhere and anytime. He is pathetically biased, but I think that the message of free thought needs to get out

Wolken is clearly a brilliant man, because he can write an article, without any sources, only his brilliance. Amazing. In any case , I can’t wait for him to show me the light. He will set me straight and I can move forward.

Leach then did a Q&A with The Seattle Times in which he said Wolken would “probably be selling Big Gulps here in a couple years.” And that’s how we get to “Big Gulp Left.”

After finding out about the naming of the play, Wolken refused to back down from the tete-a-tete.

If we’ve learned anything, it’s that, yes, Mike Leach is obsessive. Can’t wait until we see “Big Gulp Right,” “Big Gulp Center,” and the eventual creation of the “Little Gulp” formation.