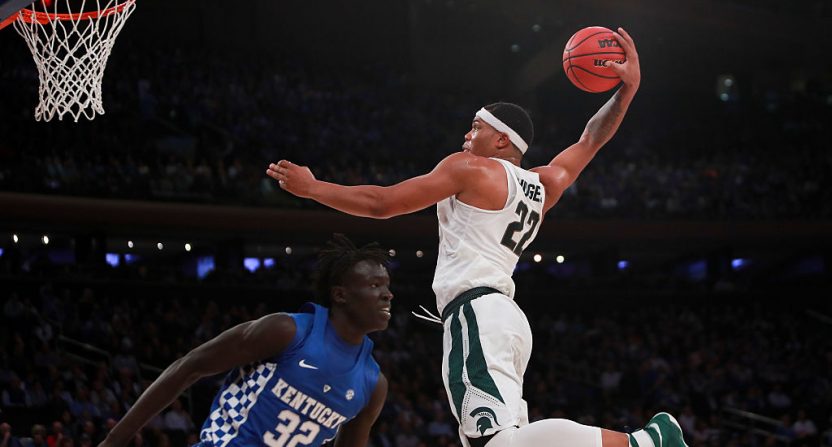 Michigan State forward Miles Bridges made a rare move returning to school when he likely would’ve been a lottery pick in this year’s NBA Draft. And that’s of course huge for the Spartans, as they’ll have a guy who could be playing legitimate minutes for an NBA team leading their roster.

The Spartans will now be the Big Ten’s best team, and possibly by a wide margin. But Bridges’ return doesn’t automatically make Michigan State a national title contender.

The Spartans return seven of their top nine players and add a great recruiting class. Senior forward Gavin Schilling, who missed last season with an injury, should return as well. Their sophomore class will easily be the best in college basketball, and Bridges could be the National Player of the Year. His freshman year averages of 16.9 points, 8.3 rebounds and 1.5 blocks already stood out.

When Bridges returned from an ankle injury in January, the Spartans ranked No. 47 in Ken Pomeroy’s efficiency ratings. They finished the year ranked No. 40. The team was better with Bridges, and by the eye test they looked even a bit better than the numbers show. But they were still average and got smacked by Kansas, a true national title contender, during the final 10 minutes of a second round NCAA Tournament loss, ending their season with a 20-15 record.

With Bridges, their best wins all came at home against Minnesota (during their big January slump), Wisconsin (during their big February slump) and Michigan (before they got hot two games later). Yes, this was a team of mostly freshmen. But they still didn’t accomplish anything that screams national title contender.

There are no easy comparisons, but looking at Creighton in 2013-14 is a good place to start.

The Bluejays finished the 2012-13 season ranked No. 22 in the AP Top 25 and No. 15 on Kenpom.com. That’s significantly better than 2015-16 Michigan State, but still not “national title contender” level. Then Doug McDermott, who became National Player of the Year, returned to school, Grant Gibbs got a sixth year of eligibility, and the team added another solid guard in JUCO transfer Devin Brooks. They lost their starting center, but a special year appeared on the horizon.

And Creighton was really good. They went 27-8 and 14-4 in the Big East. But the Jays got rocked in the second round of the NCAA Tournament by Baylor and actually finished worse than the previous year in Kenpom at No. 17.

Again, not a perfect comparison for a few reasons. But it shows that the return of a lottery pick and National Player of the Year contender does not guarantee major improvement.

Michigan State was No. 22 in The Comeback’s Way-Too-Early Top 25 when we assumed Bridges was going pro. They’ll be significantly higher in our updated version after the NBA draft deadline on April 23. They may make it into the top 10, but I can spill to you they definitely won’t hit the top six.

While Bridges is the star, Michigan State returns three other terrific sophomores in forward Nick Ward, point guard Cassius Winston, and shooting guard Joshua Langford. Many players show a dramatic growth in their second year, but it’s not a guarantee. These guys already played impressively as freshmen, but that did not lead to impressive results.

(For the record, while we’re making 2014 Connecticut comparisons, Bridges is the type of player who could carry Michigan State, even if it underperforms in the regular season, to a national title as a mediocre seed. He’s that good.)

Next year’s Spartans will be significantly better. If Purdue’s Biggie Swanigan goes pro as expected, Michigan State could roll to the Big Ten title. But let’s hold off on the national title talk until the product on the court tells us this team has made an actual jump.