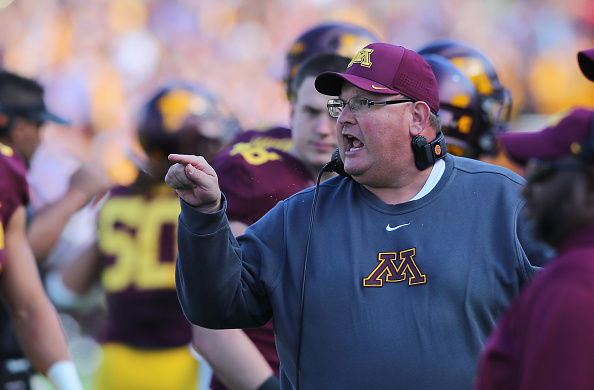 The University of Minnesota has had quite the past month or so. The craziness in Minneapolis ultimately culminated in the firing of Head Football Coach Tracy Claeys earlier today.

Let’s take a look at the timeline of how the past month has transpired for the Golden Gophers:

December 14th, 2016 – The University of Minnesota suspends 10 players for their alleged involvement in a sexual assault incident that occurred in September.

December 15th, 2016 – Sources report that members of the Minnesota football team may boycott their appearance in the Holiday Bowl due to how the University handled the sexual assault investigation.

December 17th, 2016 – The team end their boycott essentially when the University called their bluff and didn’t reinstate the 10 suspended players.

January 3rd, 2016 – The University of Minnesota fires Tracy Claeys after one and a half seasons.

Claeys took over for Jerry Kill as Minnesota head coach in 2015, and led the Golden Gophers to a Quick Lane Bowl win over Central Michigan. In 2016, Claeys led Minnesota to a 9-4 record overall capped off by a win in the Holiday Bowl over Washington State. He went 11-8 overall during those two seasons.

However, it’s Claeys’ handling and taking the player’s side in the sexual assault scandal suspension and boycott that most likely led to his firing.

After the scandal and potential boycott broke out in mid-December, Claeys tweeted the following:

Have never been more proud of our kids. I respect their rights & support their effort to make a better world! 〽️

It’s surprising that Claeys never took that tweet down, although he’s only tweeted once since and it was 30 minutes later:

Once the news of Claeys broke, it became extremely evident that he had a much stronger connection with the players than the administration.

Senior quarterback Mitch Leidner said that it’s a “pretty sad day for Gopher football” and that he doesn’t know who would want to be a part of it right now:

Minnesota QB Mitch Leidner: “This is terrible decision by the administration. This is a pretty sad day for Gopher football."

Minnesota QB Mitch Lender: “No one is happy w/administration right now. I don’t know who would want to be part of this program at this time"

More comments from Leidner from the Star Tribune:

“It’s extremely sad. Our players are behind Coach Claeys and the staff 100 percent. It’s a sad day for Minnesota football,” Leidner told reporters as well. “It’s a scary thing when an administration fires a coach for standing up for his players. It’s going to be very challenging for another coach to want to come into this situation.”

Tracy Claeys informed team via text he was fired: “I wouldn’t change anything in the world. I love & support all of you. Best of luck”

These quotes from an underclassman on the Minnesota football team were particularly eye-opening:

How can someone makes such an idiotic decision…

The administration the team is frustrated with is Athletic Director Mark Coyle and University of Minnesota President Erik Kaler.

Minnesota AD Mark Coyle: “Let me be clear: this was the right thing to do. Coach Claeys’ Tweet (supporting players) was not helpful"

“I determined that the football program must move in a new direction to address challenges in recruiting, ticket sales and the culture of the program. We need strong leadership to take Gopher football to the next level and address these challenges,” Coyle added in a statement.

Eventually, Claeys did speak to reporters and was pretty clear about what he thought about the decision.

"I won't be up here freezing my ass off, so y'all enjoy the winter." MN Gophers FB coach Tracy Claeys to our camera after being fired.

It’s pretty clear there was a major disconnect between Claeys and the administration, but the issue now for the University is was the disconnect bad enough that they should risk losing a lot of players?

The current players who were quoted above make it sound like a lot of players currently on the team could be leaving. There also is the question of what happens to the recruits? The Golden Gophers currently have 15 commits according to ESPN, none of which are Top 300 recruits.

With the players speaking freely about their distain for the administration, you have to wonder if Coyle and Kaler will try to make amends by letting key players take part in the coaching search.

However, some people are reporting a new Head Coach may already be on his way…

Impression I had been given by several folks: Minnesota would not have fired Claeys unless Fleck was coming.

Other names that could be in the mix are Les Miles and Bryan Harsin (Boise State) according to Joe Christensen. If the Golden Gophers were able to bring in Miles, that would be a major boost for the program. However, someone like Fleck may know the area better and is coming off a Cotton Bowl appearance at a mid-major.