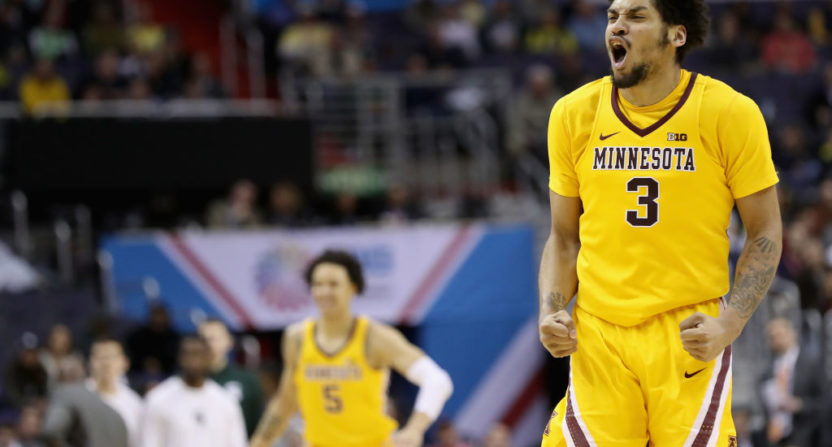 Michigan State garnered all the preseason hype in the Big Ten. With Miles Bridges and several other talented pieces, the Spartans will be a problem for every team they face. But based on some other early results, the their path to a conference title may not be as easy as many predicted.

On Monday, Minnesota faced a Providence team that could be Ed Cooley’s best in his seven years there. After 31 minutes of neck-and-neck hoops, the Gophers pulled away for an emphatic 86-74 win. Predictive metrics are spotty this early in a season, but Providence entered Monday’s game ranked No. 24 in KenPom and No. 35 in Sagarin. They were ranked 22nd in The Comeback’s preseason top 25. In all likelihood, the Friars will make their fourth straight NCAA Tournament this March behind with their top seven players back from last year’s team. So this is a legitimately great win for Richard Pitino’s club, right up there with Texas A&M’s rout of West Virginia as the most impressive victory in the opening days of the season.

The Gophers shredded Providence’s usually stifling defense for 1.15 points per possession behind another dominant double-double from junior forward Jordan Murphy, who turned in another dominant double-double with 23 points and 14 rebounds. Bridges was not only a shoo-in for Preseason Big Ten Player of the Year, but may experts picked him to win the national award, too. So far Murphy has looked like a worth challenger. In the season opener against USC Upstate, he dropped 35 points on 13-for-22 shooting. He’s only 6’6″, but with his toughness and physicality, he’s 19-for-21 scoring at the rim through two games.

Just check out the strength with which he finished on this and-one dunk.

Minnesota been known for their defense under Pitino, but with multiple scorers surrounding Murphy, they’ve off to a scorching start offensively. Northwestern’s Bryant McIntosh entered the season as the league’s undisputed top point guard, earning a unanimous selection to the preseason all-conference team. Minnesota’s Nate Mason was also a member of that team, although not unanimously, and so far he has looked like McIntosh’s superior. Although Mason didn’t hand out any assists Monday, he finished with 17 points on 11 shots.

After struggling in the opener, sophomore wing Amir Coffey came alive with 15 points on 4-for-9 shooting, including a trio of cold-blooded threes in the second half. You can see two of them right here:

Junior guard Dupree McBrayer is usually good for about 10 points per game, and freshman Isaiah Washington has added another perimeter threat along with college basketball’s best signature move, “The Jelly.”

This Minnesota team is deep and loaded with firepower. And while their defense hasn’t been great so far, they have a pair of interior stoppers in Murphy and fifth-year senior Reggie Lynch. If it comes down to it, they’ll be able to outscore most of the teams they play.

The Gophers will be heavy favorites in their next four games, and barring a big surprise they’ll be 6-0 entering their next big test on Nov. 25 — a matchup with Alabama at Barclays Center. Later on in non-conference play, they’ll also face Miami and Arkansas.

Handling success can be a major challenge for a team experiencing high expectations for the first time. Minnesota got a taste of success last year, and they’re rolling with a veteran roster. The Gophers start two seniors, two juniors and a sophomore (Amir Coffey, who started 33 games as a freshman), bringing impressive freshman guard Isaiah Washington off the bench. Let’s check back in after a few weeks once Minnesota faces Alabama and Miami, but right now there’s no reason to think Minnesota’s start is fluky.