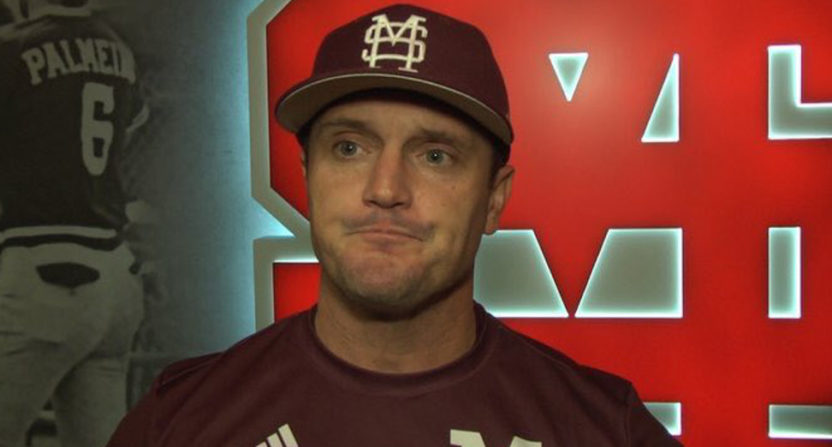 There’s a very strange story out there about the Mississippi State Bulldogs baseball team. The school made significant improvements last year under former LSU assistant coach and recruiting coordinator Andy Cannizaro, who was hired as head coach in November 2016.

But 247 Sports’ David Murray is reporting that the school is set to fire Cannizaro Tuesday morning after just one series has been played in this season. Per Murray, the firing will reportedly be for cause:

Mississippi State will officially terminate the second-year baseball coach’s employment Tuesday morning. Cannizaro’s dismissal is per sources with cause though University officials have yet to state on record what said cause is.

An official statement is forthcoming. The University will place pitching coach Gary Henderson in charge of the 2018 team for the remainder of this season. Mississippi State opened the schedule over the past weekend with a three-game sweeping at Southern Mississippi.

“I had a wonderful opportunity at Mississippi State, but unfortunately I made some poor decisions,” Cannizaro said. “I hope Mississippi State University and all of the fans and people affected will one day forgive me.”

Cannizaro was introduced as Mississippi State’s head coach back on November 5, 2016, the same day that former baseball coach John Cohen (who’d held that role for nine seasons) was officially announced as the school’s athletic director. Cannizaro had an excellent debut campaign in 2017, leading the Bulldogs to a 40-27 regular-season record (17-13 in the SEC) and the 13th regional title in program history before they lost to his former school in the Baton Rouge superregional.

While that season-opening series loss to Southern Mississippi is certainly disappointing, it seems highly unlikely that’s enough of a reason to part ways with a promising second-year coach. That adds some credence to the report of him being fired for cause. And WCBI (the Columbus, Mississippi CBS affiliate) sports director Robby Donoho tweeted that his sources confirm Murray’s report:

BREAKING: Sources confirm Mississippi State will fire head baseball coach Andy Cannizaro after a little over one season with the Diamond Dawgs. More details to follow on https://t.co/0OFmjtpd3T and on #WCBI Sports on Tuesday. pic.twitter.com/qUGM1Jc4hh

Before entering coaching, Cannizaro played at Tulane and was a two-time All-American in four years there. He was drafted by the Yankees in 2001 and played in their organization through 2007 (earning a MLB callup in 2006 and playing in 13 games with them) before signing a minor-league contract with the Tampa Bay Rays in the 2007-08 offseason. He received one at-bat with Tampa Bay in 2008 and spent a couple of further years in the minors with various teams before a five-year scouting job with the Yankees and then the assistant coaching job at LSU.

There’s a whole lot of speculation out there on just what caused Cannizaro’s firing, but no firm reports yet. However, this “I Would Fight And Die In The Trenches With Andy Cannizaro” piece on SB Nation Mississippi State site For Whom The Cowbell Tolls appears to have aged poorly since its posting Monday afternoon. Which they’ve since admitted:

Despite being swept this past weekend, Andy Cannizaro is the guy to turn this team in the right direction. https://t.co/fDFVOFZp6R

Cannizaro’s most recent tweet Monday evening was about looking forward to the team’s next game Wednesday:

Excited to get back after it Wednesday against Jackson State!

And that got a whole lot of interesting replies: