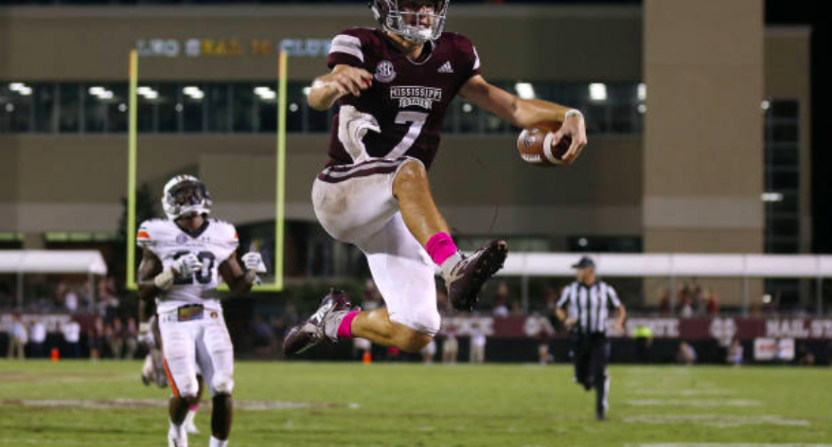 Last year, the Auburn Tigers were almost certainly a game away from being the first two-loss team to make the College Football Playoff. If they want to earn their first CFP berth this year, they’ll have to be in that same position again. Of course, seeing as the Tigers will face Georgia and Alabama in two of their final three games (on the road, no less), we’d still have to call Auburn a lock if it wins out.

Of course, that’s getting way ahead of ourselves. The fact is, Auburn came into its sixth game of the season as a Playoff contender- hence the No. 8 national ranking. The Tigers will leave their trip to Starkville, MS a beaten team. A team that in theory can still make the Playoff, certainly, but not a team that anyone should expect to.

Mississippi State entered this game with a two-game losing streak and a huge chip on its shoulder. The Bulldogs were pegged by many as a potential SEC West dark horse, and instead lost consecutive games to Kentucky and Florida. (Neither of those losses look nearly as bad now as they did at the times the games were played.)

The game started off as a bit of a defensive slugfest, as neither team was able to gain too much traction. Field goals were the main way to score points, though the Bulldogs punched in a touchdown on a one-yard Nick Fitzgerald run. In fact, after watching the first half, it felt like that run might be decisive.

The second half wasn’t without controversy, though. A clear Auburn touchdown run was called a fumble, recovered by Mississippi State in the end zone.

On replay, it very clearly appeared that the Auburn player still had possession when the ball crossed the goal line. However, likely due to the lack of there being no camera with a view down the goal line (or anywhere near a half-decent angle), the call on the field stood, and Mississippi State got the ball back instead of Auburn cutting the lead to three.

Auburn did later get a field goal, but Fitzgerald punched in another touchdown run to ice the game- and his celebration showed just how much this meant to him and the team. On a night where Fitzgerald broke Tim Tebow’s SEC record for rushing yards by a quarterback, he gave new coach Joe Moorhead his first SEC win.

Things don’t get any easier for either Mississippi State or Auburn from here. The Bulldogs travel to face LSU in two weeks (they have a bye next week), and will travel to face Alabama in November. Auburn, meanwhile, will face both Georgia and Alabama on the road in November. Both of these teams are very talented, but tough schedules and early struggles means that neither will be appreciated for as good as they really are.