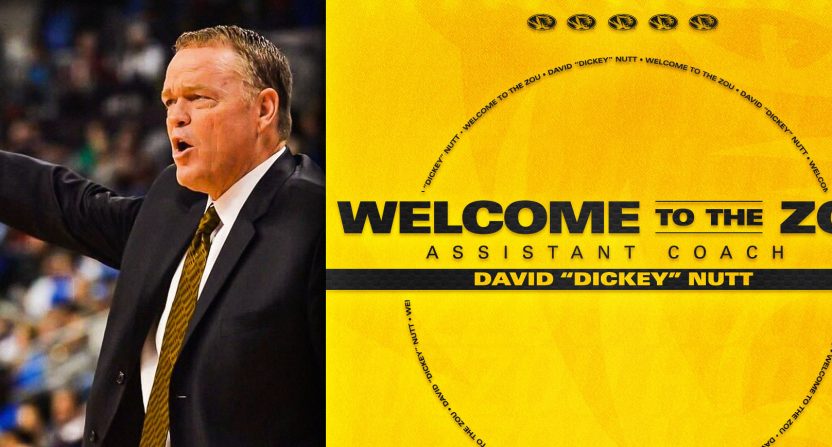 Look, when a college or pro sports team brings on a player or coach with a name that makes people giggle like they’re little children, it’s probably going to lead to a whole lot of jokes on Twitter. It happens every time Dee Virgin signs with a new NFL team and it certainly happened Thursday when the Missouri Tigers hired an assistant coach named Dickey Nutt.

Nutt and Gates have worked together previously at both Cleveland State and Florida State.

Nutt is a longtime coach in the college ranks, having been the head coach at Arkansas State between 1995 and 2008. He was also the head coach at South Missouri State from 2009 to 2015. Nutt was named Sun Belt Coach of the Year in 1998 and took Arkansas State to the NCAA Tournament in 1999 but didn’t find too much success at his second stop. Since then he mostly worked as an assistant for Florida State, Stetson, and Cleveland State.

Now, he’ll be an assistant coach at the University of Missouri, working under Dennis Gates, who was also his boss at Cleveland State.

And yes, he is the brother of college football coach Houston Nutt.

But all of that is secondary to the fact that his given name is Dickey Nutt. And there’s no way Twitter was going to let that slide. So much so that his name was trending with so many people making jokes, which, to be fair, is the best use of Twitter possible.

Your welcome Jon hang on to that one https://t.co/DiE61vaUGm

There’s no way Dickey Nutt is a real person. https://t.co/RfXJHxfMbg

no. come on. there is not a guy named Dickey Nutt https://t.co/4DfDJUOuQh

100% rooting for this guy. Really hoping it’s not a bust https://t.co/XJ5xXVdYei

To be fair, plenty of people who have been following Nutt’s career also chimed in to say there’s more to him than a fun name.

Yes, there's the name. If you've been in the region awhile, you know it well. Deep, deep athletic and other prominent roots in the family. Many will be most familiar with brother Houston, former head football coach at Arkansas and Ole Miss, among other stops. #Mizzou #DickeyNutt https://t.co/1rFn30Mayy

Dickey Nutt resume has to be in a book, he’s been everywhere https://t.co/740LCaygVp