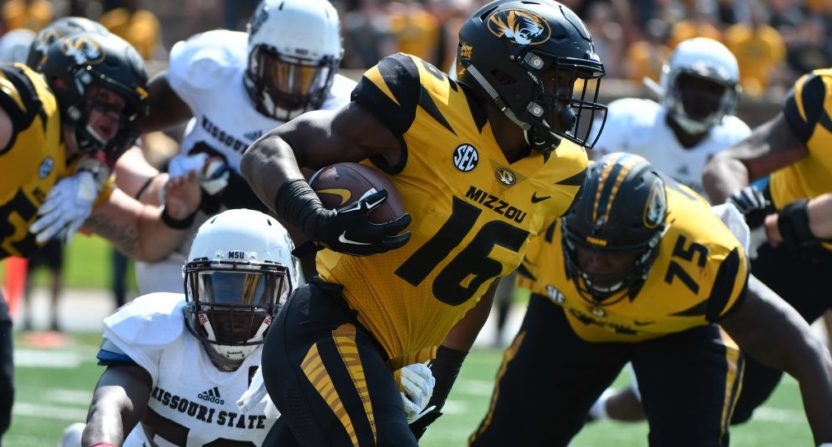 The Missouri Tigers ranked 125th in the country in total offense during 2015. Just a year removed from back-to-back SEC East titles, Mizzou plummeted and the team’s inability to move the football was a large part of that fall. The defense kept the team afloat well enough to go 5-7, then a staffing change occurred.

Longtime coach Gary Pinkel departed, and in came Barry Odom, a former Tigers’ middle linebacker. That sort of shift would usually mean the team doubles down on the defensive side of the ball. Hiring Josh Heupel as offensive coordinator had a very different effect, however.

Missouri’s offense is turning into a juggernaut.

Not the type of juggernaut that’s blowing teams out, mind you. Despite its transition to the SEC several years back, Missouri looks more like a Big 12 squad now more than ever. The Tigers are getting into shootout after shootout, giving up nearly 480 yards and 31.5 points per game in 2016.

Last season, Mizzou averaged over 500 yards of offense per game and scored over 31 points per game. In this season’s opener vs. Missouri State, they won by a score 72-43 and were tested for a full half by the in-state FCS foe. They’re currently the country’s top offensive attack, with over 800 yards (and 521 through the air).

How did this shift happen seemingly overnight?

It probably starts with Huepel, whose offense was top-12 in the country two separate times while an OC at his alma mater Oklahoma. His run-pass option system isn’t really a spread. Or even THAT up-tempo. It just takes advantage of the talent on the roster.

The other major factor is Drew Lock’s obvious progression at quarterback.

Lock left high school with hype. He was a four-star passer and a top-100 player in the country. But as a freshman, he wasn’t necessarily steady while attempting to unseat Maty Mauk as the starter. In 2015, he threw for 1,332 yards, four touchdowns and eight interceptions in 12 games.

Last year, the accuracy jumped slightly from 49 percent completion rate to 54.6 percent, and with more attempts, his other numbers rose accordingly. Lock threw for 3,399 yards and 23 touchdowns. Missouri was the SEC’s second-best passing offense behind Ole Miss (and NFL Draft pick) Chad Kelly last year. Ranked 20th overall, it was great progress, though not necessarily a prolific performance.

It’s only one game, but this year he’s already at 521 yards and seven touchdowns on 61.8 percent passing. Missouri is averaging 10.87 yards per play. There’s still room to improve a bit, though, as Odom mentioned this week:

“(Lock) made a big jump, and was more mature in his throws, and more consistent. But that’s gotta continue. It was one week. And he understands that. He’s got a great grasp of what we are trying to do offensively.”

There’s also an increasing pressure on the group, since the defense appears to have regressed even from 2016’s lesser effort. As SB Nation’s Rock M Blog points out, the success of that offense almost creates more work for the defense, too. The more quick, successful drives for Missouri on the offensive side means more possessions faced on the defensive end. And those can start to add up.

This is not a novel concept for college football programs. Missouri’s attack is quick, but not necessarily predicated on big plays or an up-tempo pace. The Tigers’ plays-per-game average is barely in the top 50 this year, and the same went for last season too. It’s also not an Air Raid offense that goes five-wide as often as teams like Texas Tech or Washington State. There’s balance at Mizzou — a benefit that many high-octane offenses simply don’t get to enjoy.

While it’s unlikely that the Tigers can continue at this pace, what’s already transpired is proof that no scheme change is too radical for a program, provided there’s talent in place. Missouri’s not at the top of the ladder in terms of recruiting. But hitting reset with top-40/50 talent is much easier than doing so when your athletes aren’t already top-level. Those players can turn into top performers. But there’s typically more teaching and development that needs to occur first.

Missouri’s swing from bottom-10 to top-10 offense is unprecedented. However, that doesn’t mean it won’t happen again now that they’ve provided a map on how to pull it off. Other programs don’t necessarily need Heupel and Lock to do it. Having them just helps considerably.