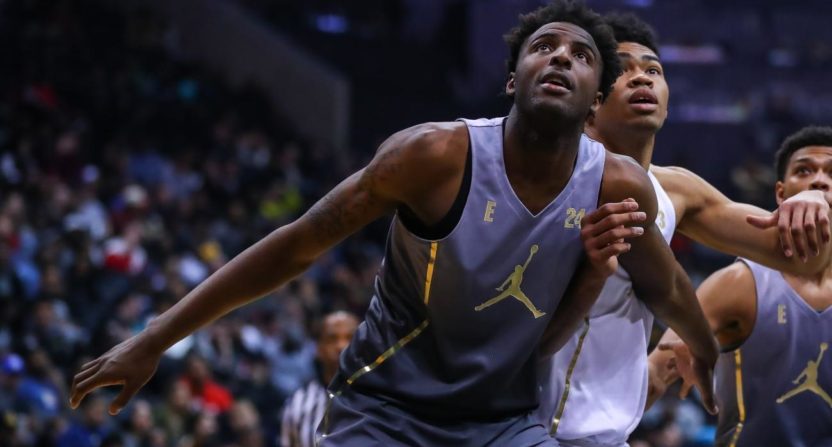 For the second time in as many months, five-star recruit Mitchell Robinson has left Western Kentucky. While his departure has obvious negative implications for Rick Stansbury’s program, the impact Robinson’s decision will have on his own career remains to be seen. He’s taking a major risk by skipping out on college ball and focusing on NBA draft workouts rather than playing a season overseas or in the D-League.

Here’s a quick catchup if you haven’t followed the saga of Robinson, a 7-foot center from New Orleans who was a McDonald’s All-American and Jordan Brand Classic selection. Recruiting gurus considered him a consensus top 15 player in the incoming freshman class, and some ranked him as high as 6th. Soon after arriving at Western Kentucky this summer, he asked for his release and considered transferring to Kansas, LSU, or New Orleans. But NCAA rules would have required him to sit out a year if he transferred, and he landed back at WKU before Labor Day Weekend.

Now, according to Scout.com, he’s left school again — this time for good — to devote all his time toward NBA draft training:

“The lifetime goal of mine is to play in the NBA and I feel like forgoing my year of college and going straight to work on a day to day basis will help prepare me, so I can focus just on basketball and maturing,” Robinson added.

“He’s strictly focusing on training in Dallas,” his mother told Scout. “He has another plan and it’s training.”

By the time the 2018 draft rolls around next June, he’ll have gone more than a year without participating in a competitive game. Although some mocks recently pegged Robinson as a lottery pick, his chances of becoming anything more than a mid-to-late first round pick are slim, particularly in a draft class as loaded as this one where franchises will be less likely to take a risk with a lottery pick. He’s still got plenty to prove, according to one NBA executive who spoke to ESPN:

“He’s a huge red flag,” one high-ranking NBA executive told ESPN. “And I’m not sure he’s even that good.”

He would’ve had chances to prove himself at the Battle 4 Atlantis, where the Hilltoppers will face Villanova and at least one more Power 5 opponent. They also travel to Wisconsin for a game that would’ve pitted Robinson against All-American power forward Ethan Happ. While those opportunities fall to the wayside, Robinson won’t have to face the criticism were WKU, which hasn’t made the NCAA Tournament since 2013, to fall short in Conference USA, typically a one-bid league, to perennial contenders Middle Tennessee, Louisiana Tech, and Old Dominion.

Robinson’s chosen situation mirrors that of Kentucky guard Hamidou Diallo, a five-star recruit in the Class of 2016. Diallo redshirted his freshman year at Kentucky and considered entering the 2017 NBA draft despite never playing a collegiate game. He ultimately returned for the 2017-18 season after teams reportedly wouldn’t guarantee he’d even be a first round selection. Everyone knew about Diallo’s skills, athleticism and high school dominance. Even after a year of practicing with three first-round picks under John Calipari’s tutelage, NBA teams weren’t ready to take a risk on him.

Robinson didn’t have to stay at Western Kentucky. He made a poor decision to commit there in the first place, and an even poorer decision to attend summer school when he was having second thoughts. Had he waited to enroll, he could have transferred to Kansas, LSU, New Orleans, or anywhere without needing to sit out a season. Opting to train on his own rather than gain some valuable exposure and experience overseas or in the D-League is yet another episode in a string of bad decisions.