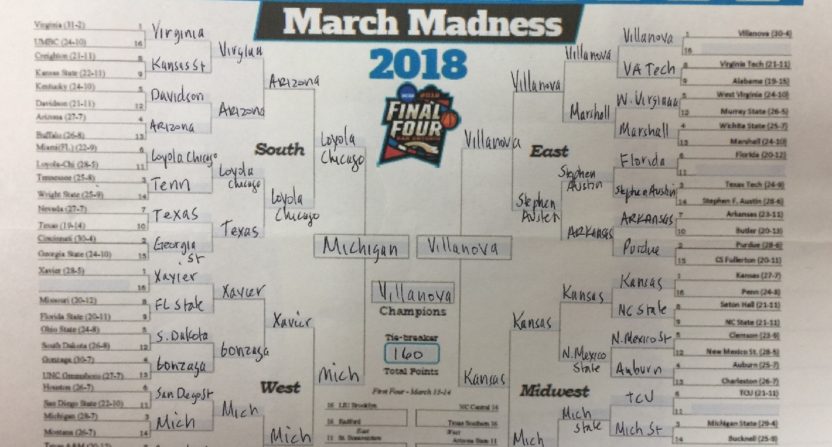 At ESPN, where upwards of 17.3 million people filled out brackets as part of the annual Tournament Challenge, just 550 managed to nail the Final Four of Loyola, Michigan, Villanova, and Kansas. That’s .003 percent of all participants.

One of them is my mom, Brenda Rigdon.

Every year, I organize a no-money friends and family pool. Both my parents love sports and they definitely love college basketball. As far as I know, neither my mom nor my dad has an ESPN.com account. Traditionally, they print out a bracket, fill it out by hand, and send me a picture of the finished product to load into the contest. (This year, my dad saved a PDF of his and sent it to me via Dropbox. Maybe my days as an intermediary are numbered.)

Mom did it her usual way and when I entered it, I laughed at the Loyola selection. Not too hard, as I had them in the Sweet 16, but still, Loyola to the Final Four? Why predict that and ruin your bracket’s hopes up front?

The time has come to share my mom's Final Four. pic.twitter.com/LWywqW69Ah

For the record, yes, that’s her bracket, if you’re the sort of person who questions this kind of thing.

I tweeted it out during the Loyola-Kansas State game on Saturday, the first of the Elite Eight matchups. I also can’t fool ESPN’s Tournament Challenge, which locks before the Round of 64 games tip. (Her bracket is here.) If you still want more proof, there are a few more tweets below, and if you still need more proof, then I’d recommend reading further, because Mom has some thoughts on people like you.

Mom also only does one bracket every year, so this isn’t an example of someone throwing multiple brackets at the wall and then claiming success when one sticks. (Mom, on the subject: “If they’re your picks, they’re your picks. Otherwise, it’s like cheating.”)

I obviously had to talk to her about it.

You’ve picked the Final Four! How does that feel?

It feels… unreal. Like I must have dreamed it, or something, because I can’t imagine being one of 550 people (on ESPN’s contest) to pick the Final Four. It just feels weird.

I can’t remember it happening, but have you ever picked the Final Four correctly before?

No, because I have all these built-in prejudices. Like I never pick Duke, because I just don’t like Duke. So that’s one. And then I always try to pick Indiana, if they’re in it. Of course, they weren’t in it this year so that probably helped me. So no, I never have. I’ve never even gotten this close to picking the Final Four.

It’s always hard to pick the Final Four. This year, it seemed especially hard thanks to Loyola. What made you decide to pick them?

Well, a couple of things. I read the New York Times online every day because our little town doesn’t really have a real newspaper. And I think it was in the New York Times, they had a little article about March Madness that was something like “Here are Cinderella teams if you’re filling out a bracket,” and Loyola was one of them. And the reason I picked Loyola out of those teams was, and this is really weird, but you’ve known me a long time: Bob Newhart.

Bob Newhart used to have a TV show, the original Bob Newhart Show. He played a psychologist in Chicago, and he graduated from Loyola. One of the scenes in the opening credits was the El in Chicago, and then they showed Loyola University, so it stuck in my mind. I loved that show so when Loyola was one of the teams, I thought “Why not? Let’s choose that one.”

I was going to ask, now that you’ve picked the Final Four, you have Villanova over Michigan in the championship game. Do you root for Loyola as an underdog, or do you root for your Final Four to stay perfect and pull for Michigan?

Well, you know they’ve gotten this far, and I’m always for the underdog. So secretly, I’m rooting for Loyola, even though I don’t have them winning it all. If they did win it all, it wouldn’t break my heart. I think it would be really cool if they won.

It’s hard for an Indiana fan to cheer for another Big Ten team, as much as you want to. Because it is the Big Ten, and that is your conference, and you should support them, it’s still hard as a diehard IU fan. Very hard. But, realistically, I think Michigan will beat Loyola.

But if Loyola did win, I’d be okay with that.

As you’ve seen on Twitter, some people think this is fake, somehow. I wondered what you think about that.

I read that on Twitter and at first, it really made me mad! Because my god, I’m 59 years old! I’m just a mom, filling out a bracket to be in a family pool! Give me a break!

This is real sad, but I looked up the guy because I was going to tweet at him, but then I thought “Come on, Brenda, let it go.”

So I let it go. I put my phone down and I walked away, and then I came back and thought “Well, I at least have to stand up for my bracket.” So that’s when I tweeted at you to let you know I’m standing by my choices.

Who even makes Wite-Out anymore? And who are these people, that they’re so concerned about this little old lady in Indiana who filled out a bracket and now they’re saying “It’s not real, it’s fake, she whited it out, there’s too many changes.”

In her only bracket, my mom is one of 550 in ESPN's contest to pick the Final Four correctly. pic.twitter.com/LbGNyRYoX0

It really set me off. I was, as my dad used to say, thundering around the house, slamming things around.

And your dad said to me, “What is wrong with you?” So I said “There’s some kid on Twitter who thinks I cheated!” And he said “What? What are you talking about?” So I told him the whole story, and he just dissolved into a pile of giggles sitting on the steps by the front door because he couldn’t believe that I was so torn up about somebody that I’ve never met, that I’m never going to meet, who’s calling me a cheater and a liar on Twitter.

Because these kinds of people just send me right over the edge, and there’s no way back.

My uncle @JobuRhod1723 and I were making fun of it pre-Tournament. Not now. pic.twitter.com/V7a1wthvcJ

So, yeah, it really honked me off. But no, I didn’t cheat. That’s my handwriting, that’s not Wite-Out, those are the little boxes on the printout. If they looked closer, they’d see those rectangles are perfect 90 degrees on the corners, and who can Wite-Out that perfectly? I mean, who date-stamps their bracket, Jay? Who does that?

I guess they want your birth certificate and Social Security card.

Seriously. These people need to get a life. Saying something like that on Twitter probably just adds gasoline to the fire, though, doesn’t it?

It is kind of a no-win situation.

The end of the Kansas-Duke game was tense for multiple reasons, obviously. Your Final Four was on the line, plus you’re staunchly anti-Duke. What were you thinking when Grayson Allen’s shot went up at the end of regulation?

For me, personally, it was like “Ha! God doesn’t want you to win either, you bunch of Dukie bastards!” That doesn’t sound so good, but that’s what I was thinking. Now I have a chance. It was great. And then when the Duke player fouled out in overtime? That was awesome.

You normally cheer against Kansas, too, was that hard for you at all?

I think everyone was pretty happy to see Kansas serve that purpose.

They’d have to be! Who likes Duke? Only Duke fans like Duke.

I wanted to bring up the 550 brackets out of 17.3 million, which is something like .003%. Are you in any other pools with your bracket or anything?

No, I was invited to be in one and now I’m wishing I would have. There’s a friend of your dad’s who does one every year and I usually enter that one, but this year I didn’t. “Eh, Indiana’s not in it this year, so it’s not that big of a deal.” But I’ve never gotten this close before! If I’d have known I’d be doing such an awesome job, I would have. But no, this is my only one.

But you’re definitely due to win the family and friends pool, I’m not sure you’ve won it before.

That’s what someone asked me on Facebook when I posted that it was 549 people and me, and someone asked “Well, what did you win?” Probably nothing! Bragging rights, but that’s about it. But I’ll be able to brag for a whole year. I’ll probably have to retire now, though, because I’ll probably never get this close again.

Or maybe you’ve stumbled on the correct methodology.

Find a Cinderella and ride them all the way to the Final Four, while simultaneously rooting against Duke.