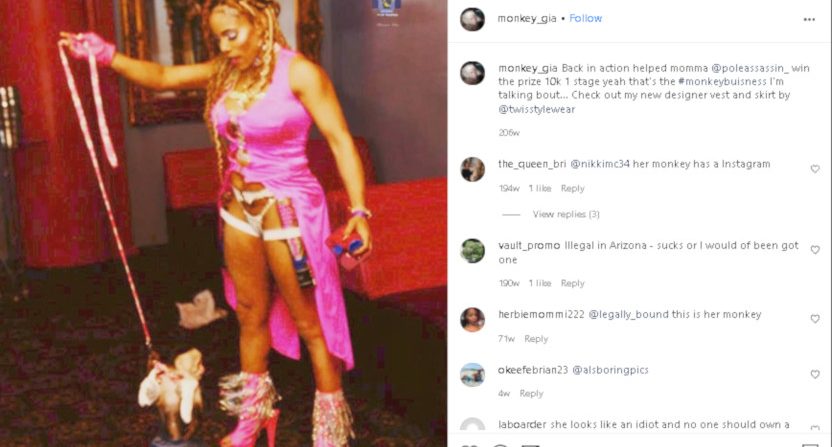 The reports from Nov. 1 of a monkey owned by Texas assistant head coach/tight ends coach Jeff Banks’ girlfriend Danielle Thomas, and once went on biting a child on Halloween have now led to a lawsuit. Texas head coach Steve Sarkisian called that situation “not a distraction at all” later that week, but it may become more of one now that a suit has been filed. The suit was filed in district court in Austin Thursday on behalf of Amy and Casey Clinkenbeard and their child; it’s against both Banks and Thomas (who performed as a pole dancer under the name “Pole Assassin,” and once went on The Jerry Springer Show with her monkey, Gia, seen above with Thomas in December 2017), and it seeks damages for gross negligence and defamation. Here’s more on that from ESPN’s Mark Schlabach:

“Instead of giving a high five, Danielle Thomas’s monkey aggressively bit down on C.C.’s hand and refused to let go,” says the lawsuit, a copy of which was obtained by ESPN on Saturday. “C.C. was forced to manually pry the monkey’s jaw open. There was so much blood that C.C. was unable to see the full extent of the injury.”

The child’s hand was treated by a physician who lived nearby. The lawsuit says the doctor and another neighbor went to Thomas to discuss the incident. The doctor told Thomas that a report would have to be filed with the health department, “and that additional information on the monkey’s vaccination status would be appreciated so that an appropriate course of treatment for C.C. could be decided.”

According to the lawsuit, “Instead of showing any semblance of care for an injured child, Danielle Thomas was instead worried about the risk of her monkey being taken away. … Danielle Thomas stated to the physician that the monkey had bitten her before and that she was fine, implying that the monkey therefore did not have rabies.”

The lawsuit also mentions that Thomas has not yet provided those vaccination records to C.C.’s family. And it mentions the tweets that Thomas sent on Dec. 1, then deleted. Many of those can be seen in our original post on this, including this #MonkeyGate video of Thomas showing her backyard and narrating that there was a gate in the way:

Protip: if your pet monkey bites a child, do not tweet about it. This advice applies on Halloween as well as other dates.

The law should treat everyone as equals, so this advice should not apply with more force to people named Pole Assassin, but realistically it does.

We’ll see how this lawsuit goes, and if it winds up affecting Banks’ c9aching career.