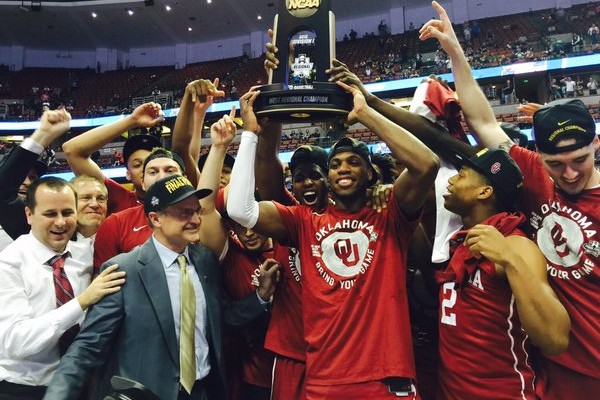 Late in that Sweet 16 game, Hield chucked a bunch of long threes. It was almost as though Hield knew the outcome didn’t ride on those shots. Placed in an unfamiliar arena, and knowing he’d have another game on Saturday, Hield seemed to be testing the shooting environment in Anaheim’s Honda Center, getting some hoists out of the system.

Buddy Hield wanted to be ready for the biggest game any college basketball player can play — no, not the national championship game, but an Elite Eight game.

It’s true: There’s no bigger pressure cooker in college basketball than the Elite Eight. Coaches coach and players play all season to get to the Final Four. The national title is the ultimate dream, but coaches and players rest easier when they’ve made the Final Four. The failure to reach that stage of the NCAA Tournament creates career-long voids and decades of regret if the Elite Eight losses are painful enough.

The regional final is the one game in which all players want to be at their best.

Buddy Hield flushed the toxins out of his body against A&M. He saved his accuracy for Oregon. 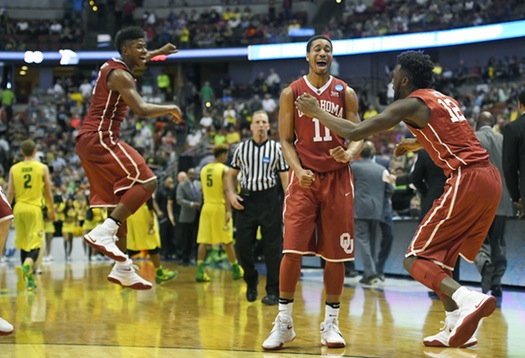 The Ducks of hockey also play in Anaheim’s Honda Center, but these basketball Ducks were fish out of water.

Buddy? His shots were wet, and as a result, he’ll paddle to the Final Four next Saturday in Houston with his Oklahoma teammates.

In the second round against VCU, Hield uncorked a spectacular 29-point second half.

In the Elite Eight, Hield was far better, at least in terms of stitching together a complete 40-minute canvas that was equally beautiful and strong in both halves.

Here was Hield at the end of the first half:

Here was Hield late in the second half to drop the dagger on the top-seeded Ducks:

A majestic rainbow… with a pot of Final Four gold at the end.

In between, Hield poured in six more threes (he was 8 of 13 for the game), but he was so much more than a long-ball shooter against Oregon. He was selective with his shots, mixing in 16-footers and some occasional drives. Hield has always been a dazzling and prolific shooter this season, but his choices have been questionable at times — not often, but just enough to notice.

Saturday, it all came together for Hield. A few scattered turnovers represented a small blemish, but all of his shots were smart ones. He established himself in so many ways, but when he didn’t have something, he let Isaiah Cousins (11 points) and Jordan Woodard (13) contribute to the cause.

Oh, and Hield even put back a miss as well: 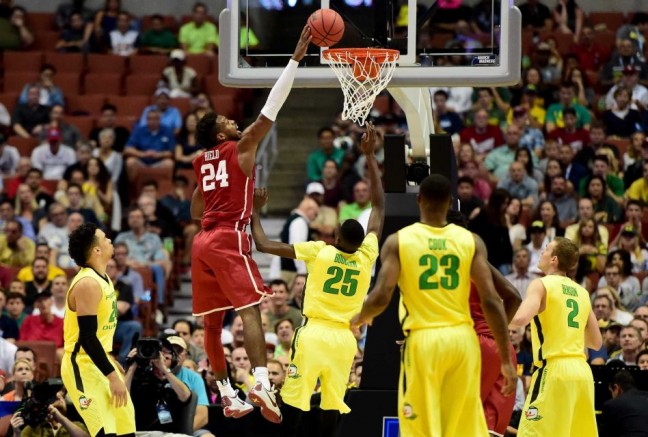 On the one day when Lon Kruger needed his superstar to be great, Buddy Hield gave him and the Sooners a masterpiece: 37 points, 13-of-20 from the field, 8-of-13 from three-point land… and a trip to OU’s first Final Four since the 2002 edition in Atlanta.

Oregon needed something special to match that performance from No. 24, and the Pac-12 champions didn’t come particularly close.

OU owned UO mostly because of Buddy’s baller moves, but also because the Ducks went dry when they attacked the tin.

This was a standstill snapshot of their day: 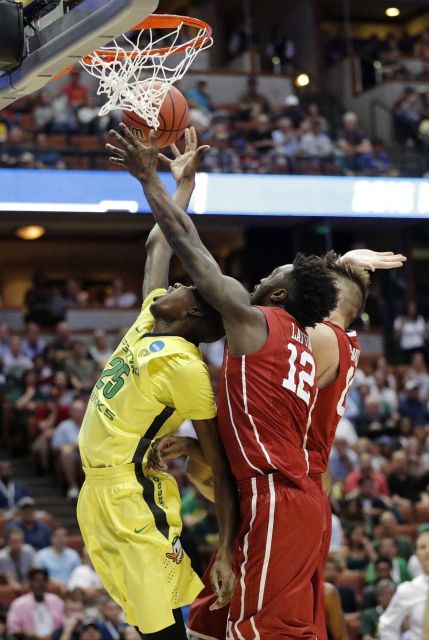 This is a video representation of the Ducks’ afternoon when they made forays to the tin:

This has happened all day for Oregon.

The Ducks were not hurt by a lack of effort or energy. Dana Altman’s team did get punched in the mouth in the first half, as OU sprinted to a 48-30 halftime lead. However, UO won large numbers of 50-50 balls in the second half and turned steals into effort points. The Ducks just didn’t hit enough shots — at the foul line, behind the arc, or within four feet of the hoop. You can dissect some X-and-O components of this game, but that’s peripheral on a day when Buddy Hield hits 13 of 20, and Oregon hits only 4 of 21 triples.

Oregon was a legitimately good team this season. Oklahoma and Buddy Hield were better.

As a result, the Big 12 — for all the grief it caught after the first round — has safely landed one of its heavyweights in the Final Four, with a chance to get a second one in the form of Kansas (whose game against Villanova started just after this article was published).

Lon Kruger, long lauded as a Mr.-Fix-It kind of coach who could instantly repair a program but wouldn’t often go on a deep NCAA tournament run, has crossed that Final Four threshold from one-time guest to two-time veteran. The 1994 season at Florida is no longer a fortuitous and isolated instance of March Madness turned to joy for Kruger; this time, he had a superstar on his roster, and he guided Buddy Hield to college basketball’s promised land…

… or maybe it was the other way around.