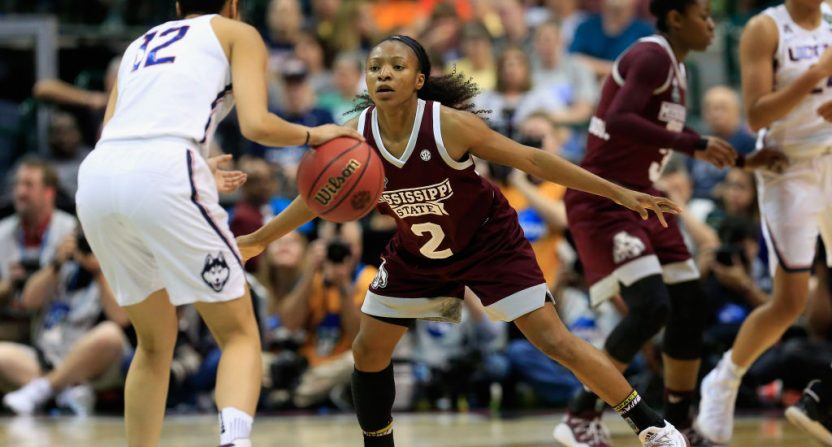 The UConn Huskies’ 111-game women’s basketball winning streak was snapped 66-64 in overtime by the Mississippi State Bulldogs Friday in one of the greatest upsets ever, and 5’5” guard Morgan William was at the center of that. William (#2 above) made a crucial defensive stop with 12 seconds left in overtime, then got the ball with five seconds left on the Bulldogs’ ensuing possession, drove the lane and hit a buzzer-beating shot over 5’11” Huskies’ star Gabby Williams:

This was just the latest moment of stardom for William, though, as she also scored a tournament-record 41 points in Mississippi State’s Elite Eight win over Baylor last Sunday. That win came three years and one day after William lost her father, and she gave an emotional interview about his impact on her afterwards. William then wrote a piece for The Players’ Tribune this week about how hard it was for her to resume playing after her father’s death, and how his memory eventually inspired her to get to where she is today:

In the days and weeks that followed, I spent most of my time alone, in my room back in Alabama. I didn’t go to the gym for a month. Didn’t touch a basketball once. There were a few times when I tried to get up and force myself to get back on the court, but I really couldn’t do it at first.

The things was, I kept hearing my dad’s voice in my head.

“Somebody is going to take your spot if you don’t put the work in.”

So eventually I got back to the gym. During every workout, his words would pop up in my head.

“The ball is going to keep bouncing, whether it’s in your hands or someone else’s.”

William was able to overcome that loss and go on to incredible success, and she’s been a key presence for the Bulldogs all year. Her sheer confidence in late-game situations is amazing, as shown in this postgame interview Friday where she said “I live for moments like this”:

William wrote this week that her 41-point performance against Baylor was for her dad, and for all the work he put in to help her get there:

But no matter what the future holds, that game on Sunday will always be for Dad. For all the years he spent helping me, coaching me and loving me. All the hours he made me fine-tune the little parts of my game — the footwork and the conditioning.

For never even once letting me complain about my height (I’m 5′ 5”) or telling me I needed to be taller to play Division I basketball, even though it was something I kept hearing from college recruiters. It never mattered to him, so it never mattered to me.

For pushing me past my limits, again and again, and for never letting me be satisfied with just being ordinary.

William’s play in this tournament has been anything but ordinary, and she’s a huge part of why Mississippi State made their first Final Four and now their first national championship game. And it’s clear that her father’s influence helped get her there. She’s an amazing player with an amazing story, and we’ll see if she’s able to come up with yet another dazzling performance in Sunday night’s championship game against South Carolina.