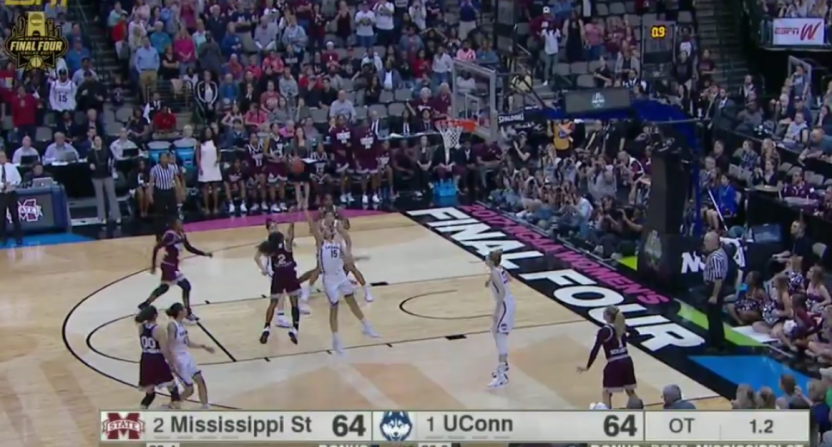 After 865 days, the UConn Huskies’ women’s basketball Division I record 111-game winning streak has ended thanks to a 66-64 overtime Final Four loss to the Mississippi State Bulldogs Friday night on a Morgan William buzzer-beater. The 5’5” William was crucial in Mississippi State’s Elite Eight win over Baylor, three years and a day after the death of her father. She was vital once again in the final seconds here, making a key defensive stop and then sinking a contested shot just ahead of the buzzer.

The Huskies faced one of their toughest challenges in a long while against Mississippi State. UConn beat the Bulldogs by 60 points in last year’s tournament, and they were massive underdogs heading into this game:

The Huskies-Bulldogs clash was a different story this time around, though. Mississippi State led 36-28 at the half and 56-52 inside the final four minutes of regulation. UConn wasn’t going away, though, and they battled back with a 7-0 run, but Mississippi State then took the lead on a three-pointer late in the shot clock.

After that, UConn tied it up at 60 on a free throw, leading to a tense final half-minute. The Bulldogs then got a great look in the final seconds, but the Huskies’ Gabby Williams came up with an incredible block, and UConn’s half-court buzzer beater missed to send the game to overtime.

A huge part of what kept Mississippi State in the game was their rebounding advantage. The Bulldogs posted 35 rebounds through regulation, well ahead of the Huskies’ 25, and they picked up 15 offensive rebounds against the Huskies’ two. However, that wasn’t as much of an edge for them in the extra frame.

In overtime, Mississippi State took an early 62-60 lead after making free throws following misses by UConn. An intercepted pass by Breanna Richardson gave the Bulldogs the chance to stretch the lead, but the Huskies forced a turnover. However, UConn then missed a three-pointer and couldn’t do anything on a second chance even after getting an offensive rebound. Mississippi State then turned it over again, though, leading to another three-point attempt from Kia Nurse that missed. Williams proved the hero once again for UConn, though, grabbing their fourth offensive rebound of the game and setting up Katie Lou Samuelson for a game-tying shot.

With the game tied at 62 and less than 90 seconds left, Mississippi State again managed to take the lead thanks to some excellent post play. William got the ball inside to 6’7” center Teaira McCowan, who made a layup despite two defenders in the area.

McCowan then got her arm on a pass inside the Bulldogs’ own end and forced a turnover, but an off-ball incident there proved damaging to their hopes. An elbow from guard Dominique Dillingham caught Samuelson in the neck. It wasn’t caught live, but UConn coach Geno Auriemma called timeout and the officials looked at the Dillingham incident on review. It was eventually called a flagrant-1 foul. That incensed Mississippi State head coach Vic Schaefer:

The foul gave Samuelson two shots. She made both to tie the game at 64, and UConn then got the ball again. However, they went for the shot early and missed thanks to a great defensive play from William, giving the Bulldogs one more chance with 12 seconds left. Here’s William’s stop on Saniya Chong:

The 5’5” William, the smallest player on the court and the hero in their previous win, then drove the lane in the final five seconds and hit a crazy shot over the 5’11 Williams at the buzzer to end UConn’s streak:

That’s an incredible play, and an incredible ending to an amazing game. It’s yet another great play from William, who had 41 points against Baylor and 13 points and six assists in this one. It’s also a remarkable ending to UConn’s unbelievable run, which saw them make 10 straight Final Fours (no one else has more than five) and win the last four NCAA titles. They hadn’t lost since falling to Stanford in overtime in the 2012 Final Four. Now, instead of the Huskies going for another title, we’ll get an all-SEC matchup between the Bulldogs and the South Carolina Gamecocks Sunday night. That’s thanks yet again to William. The smallest player made the biggest difference in crunch time once again.