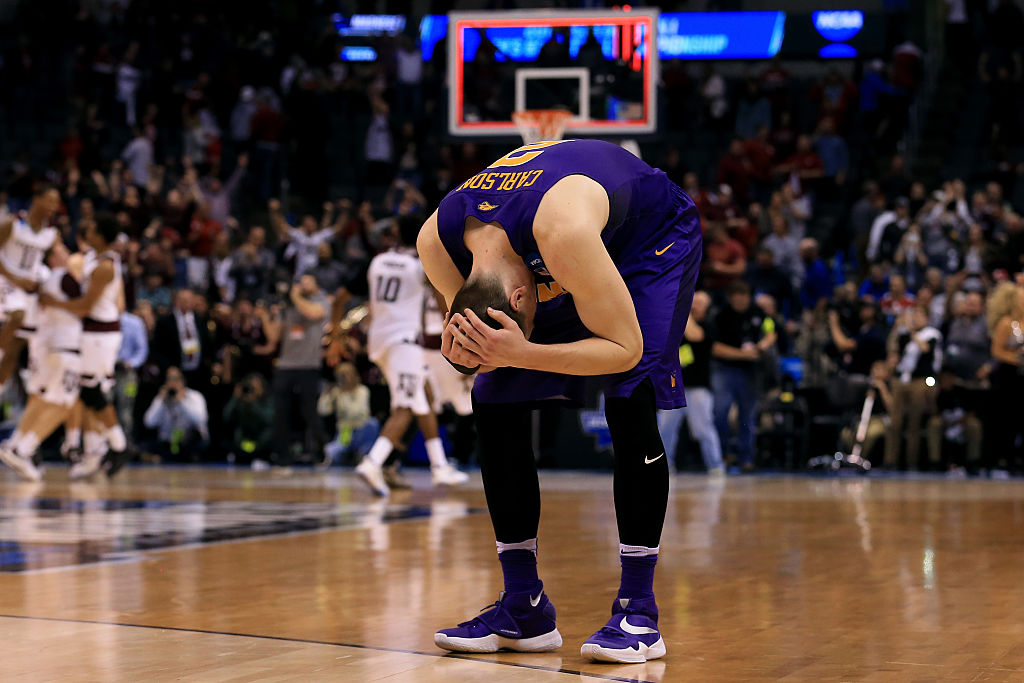 Texas A&M found themselves trailing Northern Iowa 69-57 with 48 seconds remaining in the game.  Their win probability at the time was 0.0%. Incredibly, the Aggies proved all of the win models in the world wrong by erasing a 12 point deficit in the final minute to force overtime and go on to win.

Spoiler alert: that is the greatest late game comeback and collapse in the history of the NCAA Tournament.  Why?  Because it’s never happened before.

ICYMI, Texas A&M's rally from 12 down w/less than 1:00 to play is the largest last-minute deficit overcome to win in college hoops history.

Naturally, the wild Aggies-Panthers got us thinking about other memorable comebacks and/or collapses (depending on whether you want to look at the glass as half-full or half-empty) in NCAA Tournament lore.  Here are six more games that made our list in addition to last night’s game that won’t be forgotten any time soon.

NC State’s miraculous, legendary 1983 NCAA Tournament victory should have never happened.  In fact, their title hopes should have never gotten off the ground.  The Wolfpack should have been defeated in overtime by Pepperdine in the first round of the tourney that year.  The Waves held a five point lead with just 54 seconds to go and no three point line to speak of.  (Go to 1:25:00 in the video.)  You can tell the announcers thought it was over when Dick Stockton started paying tribute to Sidney Lowe’s NC State career when he fouled out.

Pepperdine only made two of six free throws in the final minute, with Dane Suttle missing the front end of a 1-and-1 twice.  The Waves gifted NC State even more chances.  Dereck Whittenburg missed a tying free-throw attempt, but Pepperdine allowed an offensive rebound and putback by Cozell McQueen to force overtime.  NC State would go on to win the game, and the entire tournament.

Almost 20 years ago, Cinderella Rhode Island was on the verge of their first Final Four berth as a #8 seed.  The Rams led Stanford by six, 71-65, entering the final minute of play.  This is how the New York Times described what happened next, and yes, there are multiple Mark Madsen sightings in the video above:

Thank goodness for videotape. Otherwise, Stanford might never know how it pulled off a stunning 79-77 victory over Rhode Island in the final of the Midwest Regional of the National Collegiate Athletic Association tournament at the Kiel Center this afternoon.

That video might also help the game officials determine if some of the fouls they did and did not call in the last two minutes of the game were correct. And it might help clear up Stanford guard Arthur Lee’s faulty memory, because he does not remember making the choke sign twice when Rams guard Tyson Wheeler missed three free throws that would have tied the score with five seconds to play.

Trailing by 71-65 with 59.3 seconds to play, third-seeded Stanford (30-4) went from heartbreak to elation. Stanford will go to its first Final Four since the team won the national championship in 1942. The Cardinal will play Kentucky, the South Regional champion, Saturday in San Antonio.

Rhode Island did just about everything imaginable to give the game away – missed free throws, fouls, and turnovers.  What makes it all the worse for Rhode Island is that they haven’t been back to the Elite 8 since.  Side note: Jim Harrick was the head coach of both Pepperdine in 1983 and Rhode Island in 1998.  Ouch.

We’re going to cheat a little bit and move down to the D-II ranks, but this last minute comeback is too good to not include on our list.  Barton trailed Winona State 74-67 with just over 40 seconds left to play in the 2006 title game.  Anthony Atkinson scored an otherworldly 10 points in 39 seconds, including the game-winning basket at the buzzer in one of the most frantic finishes in college basketball history.

A comeback and a collapse made all the more memorable by Adam Morrison’s tears and Gus Johnson’s brain exploding.  Gonzaga led 71-62 with 3:26 on the second half clock.  The Bulldogs would not score again for the remainder of the game.  UCLA stormed back, finally culminating in Luc Richard Mbah a Moute’s game-winning layup and steal that drove Morrison to break down on the court.

The deficit might not have been as great as the other games on our list, but the stakes don’t come any bigger than the National Championship Game.  And all Memphis had to do to lift the trophy was make their free throws.  The Tigers only made one of five free throws in the final 1:15 of the game to gift Kansas a chance to tie in the closing seconds.  Mario Chalmers took full advantage and the Jayhawks won comfortably in overtime.

The Wildcats led the Illini by eight with 1:00 on the clock in Chicago, 80-72.  They had trailed earlier by 15 points.  That’s when Illinois’ star triumvirate of guards – Deron Williams, Dee Brown, and Luther Head – took over.  Each of the three made baskets in between two steals to tie the game at 80-80 in less than 30 seconds.  If you’re sensing a theme on this list, you probably know what happened next – Illinois won in overtime, 90-89.

This game is also notable because we saw a much happier looking Bill Murray, who showed what both sides of an NCAA Tournament comeback and collapse look like. 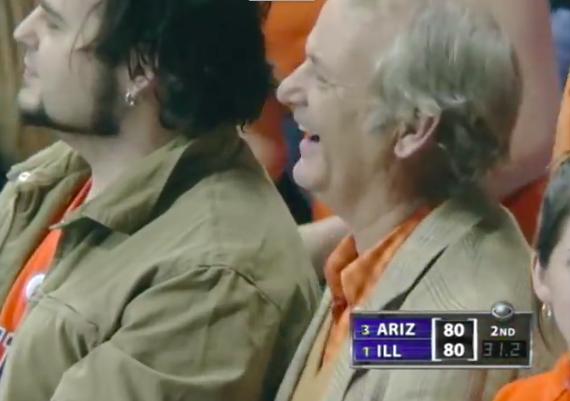 And Murray looking despondent after Xavier’s collapse against Wisconsin in 2016.  This game could very well be an honorable mention for our list as Wisconsin overcame an eight point deficit with less than five minutes left to play: 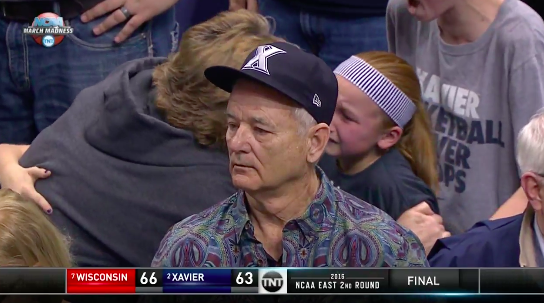 As Charles Barkley would say, “The great thing of winning or the agony of defeat.  Losing just sucks.”

This is how you erase a 12-point deficit in 35 seconds. https://t.co/l3eJ83wDDB #MarchMadness

As stated above, this isn’t a case of recency bias.  The Aggies and Panthers surpassed any late game comeback or collapse that came before it.  Northern Iowa completely forgot how to play basketball in the last minute of regulation and continually gift-wrapped Texas A&M dunks and layups off turnovers.  The Panthers turned it over not once, not twice, not even thrice.  Four turnovers in the final minute led directly to Aggies points, including the tying basket with 1.9 seconds left. A 69-57 game became 71-71 in a flash.

Of course, if Northern Iowa had staged a comeback of their own to win in overtime, we wouldn’t be talking about any of this today.  But you guessed it, Texas A&M would emerge victorious in double overtime.