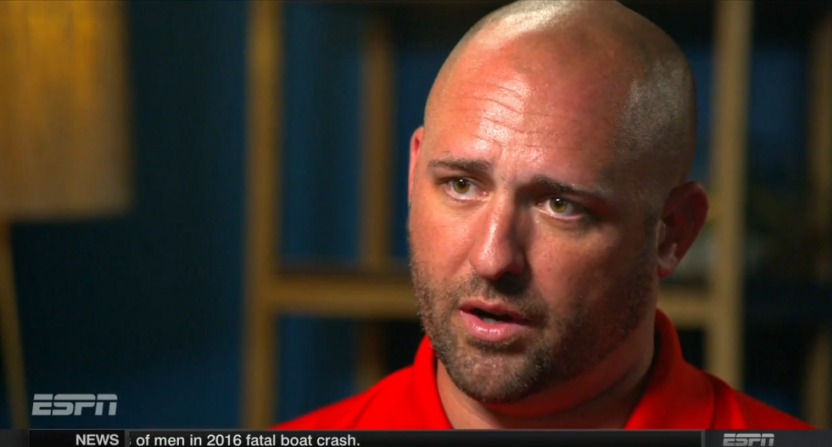 If you thought there were enough twists and turns already in the Zach Smith domestic abuse allegations that threaten to take down Urban Meyer and rock the Ohio State football program to its core, apparently we’re just getting started.

According to a report published on Facebook (as all reports on this story are required to be) by author Jeff Snook, the mothers of both Zach and ex-wife Courtney both claim that this is all a vindictive revenge plot by Courtney that has been in the works since as far back as 2013. Per the report, Courtney felt betrayed by her husband cheating on her and has openly discussed taking him and Urben Meyer down since.

“She told me that not one time, but in fact she said it several times over the years,” [Lynn Bruce, Smith’s mother] said.

She was driven by revenge when she found out her husband had cheated on her, Bruce said.

“When she found out five years ago that Zach had cheated on her, she was so angry that she vowed to me she would get back at him someday. And she said she would take Urban down, too,” she said. “And this is exactly what she did. She wanted to do as much damage as possible.

“She has been planning this for some time.”

Courtney’s own mother, Tina Carano, who is estranged from her, texted Snook to let him know that she believes Zach Smith was acting in self-defense and not being abusive to her daughter. She also echoed the revenge claims.

As far as ever hearing her daughter say she would “take Zach down,” she replied, “Yes.”

And when Meyer’s name was mentioned, she added, “I cannot quote her exact words as I don’t remember them word for word, but something to that extent. This is my daughter and I love her but I do not approve of what she has done and how it was done.”

Following that text, she did not respond to follow-up questions.

Though Bruce says the vengeance plot goes back to 2013, we know that accusations of domestic abuse reach back to 2009 when Smith was an assistant at Florida under Meyer. He is accused of throwing her against a bedroom wall, an incident that Meyer confirmed knowledge of at Big Ten Media Day. Meyer denied knowledge of 2015 incidents, which was refuted by Brett McMurphy’s second report, which included texts between Courtney Smith and Meyer’s wife, alluding to Urban’s knowledge of the abuse. He was placed on administrative leave following that report but later said that he did report the incident to the “proper channels.” Smith has since publicly denied the abuse allegations, though he has admitted that things “got out of hand.”

One thing that has to be considered in this new report is Snook’s relationship to both Meyer and Zach Smith and the university. Snook is the author of four books about Ohio State football, including “What It Means to Be a Buckeye.” The foreword of that book is written by Urban Meyer. In that foreword, Meyer praises Earle Bruce, the grandfather of Zach Smith and father of Lynn Bruce.