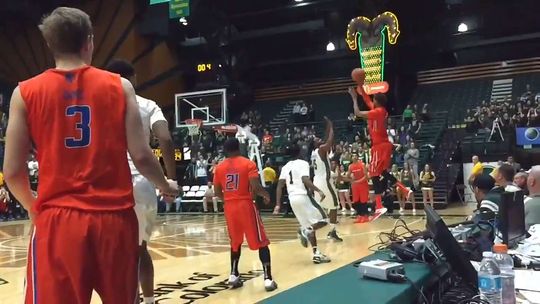 The 2015-2016 college sports cycle owns a dubious distinction: In both football and now basketball, last-play errors on the part of both officials and the replay system altered the outcomes of games.

What separates the two incidents: In football, at least the involved conference didn’t have to walk back an initial determination.

First, the background: Wednesday night in Fort Collins, Colorado, college basketball suffered an embarrassment on par with the Miami-Duke fiasco from the recent college football season. The Comeback covered the story of Colorado State’s disputed win over Boise State.

Writer Kevin McGuire rightly noted that one should not have expected the Mountain West to award the victory to Boise State, even if it was determined that the shot should have counted. McGuire pointed out that the ACC didn’t reverse the outcome of Miami-Duke, a game which initially underscored the need for reforms of both rules and policies related to replay and the adjudication of both calls and game outcomes.

The Mountain West Conference — which stated in the immediate aftermath of Wednesday’s chaos that James Webb III’s shot should not have counted — admitted its mistake. The league reversed course and said Boise State should have won the game.

The Mountain West, however, did not change the result. Colorado State will keep the victory.

ESPN’s Andy Katz put the situation — and Rice’s analysis of it — in appropriate context:

Rice said one of the officials told him Wednesday that they would take as long as needed to get the call right.

“That being said, we have an opportunity to get it right now,” Rice said.

The Mountain West cited Rule 5, Section 5, that a result of a game cannot be overturned.

“We’re doing all we can,” Rice said. “I don’t believe there is a formal protest, but it wasn’t human error, it was a technological error, so the game should be over and Boise should get the W.”

It’s really rather absurd, isn’t it?

If getting the call right matters most; taking as much time as necessary to get the call right is deemed desirable; and the play in question is the last play of the game (at least, if ruled correctly), shouldn’t any sane conference handbook have rules and policies elastic enough to enable said conference to switch a result?

Oh, but that would require critical thinking and basic reasoning skills. We can’t have logic in rulebooks and policy manuals, now, can we? In college sports, there seems to be no room for grown-up people in positions of authority to exercise common sense.

It all seems to spit in the face of what it means to receive — or offer — a college education.

Someone tell Boise State’s basketball players — just like Duke’s football players — what educational message is being sent by refusing to reverse outcomes flowing from last-play officiating and replay errors.