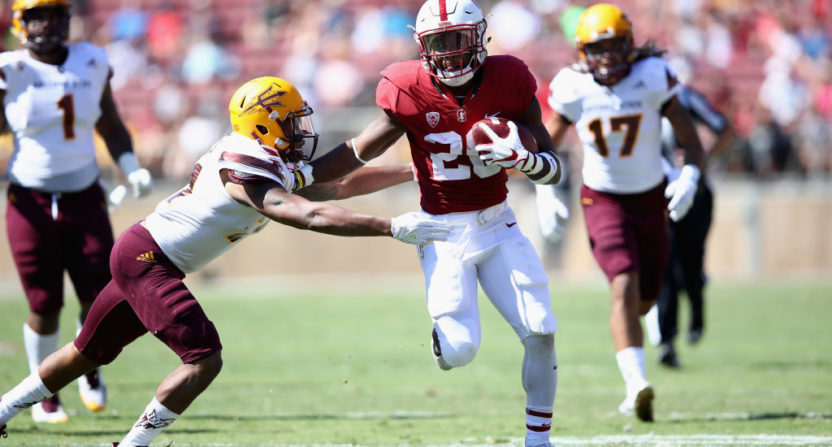 Penn State running back Saquon Barkley had a day that certainly caught the eye of college football fans and media members right from the jump. Barkley returned the game’s opening kickoff 98 yards for a touchdown and he later tossed his first career touchdown pass to add some highlights to his season-long Heisman Trophy campaign. But out on the west coast, Stanford’s Bryce Love had the performance of the day by a running back as he continued to leave his mark on the Cardinal program by taking over records previously held by his predecessor, Christian McCaffrey.

Love rushed for 301 yards, breaking the single-game rushing record previously held by the dynamic McCaffrey. In doing so, Love became the second player in school history to rush for at least 200 yards in back-to-back games, a feat done twice before by none other than McCaffrey. Love became the fastest running back to rush for 1,000 yards in a season in school history, eclipsing the 1,000-yard mark in just 87 carries in the first five games of the season.

.@CoachDavidShaw gave @Blovee_20 the game ball after his 301-yd performance. What the team did and Bryce said next is a can't-miss moment. pic.twitter.com/VuRA83jsEx

Love is showing an ability to break loose for big plays almost any time he touches the football. On Saturday against Arizona State, Love found the room he needed to score touchdowns on runs of 61, 43, and 59 yards. Love already entered the day leading the nation with the most rushing plays of 30+ yards (9), 40+ yards (6), 50+ yards (5), and 60+ yards (3), so his latest touchdown runs only pad his stats in those breakdowns. For the sake of comparison, Love had two touchdown runs that covered more ground than Saquon Barkley had for an entire game against Indiana on Saturday.

With Stanford continuing to chug along and remain a serious player in the Pac-12 picture, the comparisons between Love and McCaffrey or Barkley will only grow as the season goes on. That’s because Love is proving to be a big reason why Stanford is still to be considered in the mix for the Pac-12 championship, at least until Stanford goes up against Washington in the division. It shouldn’t be forgotten that Barkley is helping Penn State in a variety of ways while Love continues to do the brunt of his damage carrying the football, but it seems to be working well enough for both programs so far.

If Love isn’t on your Heisman Trophy radar, then it’s time to recalibrate your settings. Love has proven worthy of your attention, and he’s now facing some challenges that will make or break his run to New York as a Heisman Trophy finalist. This week, Stanford heads to Utah to face the nation’s seventh-ranked rushing defense. If Love piles up the yardage against the Utes, then he just might run his way to New York.