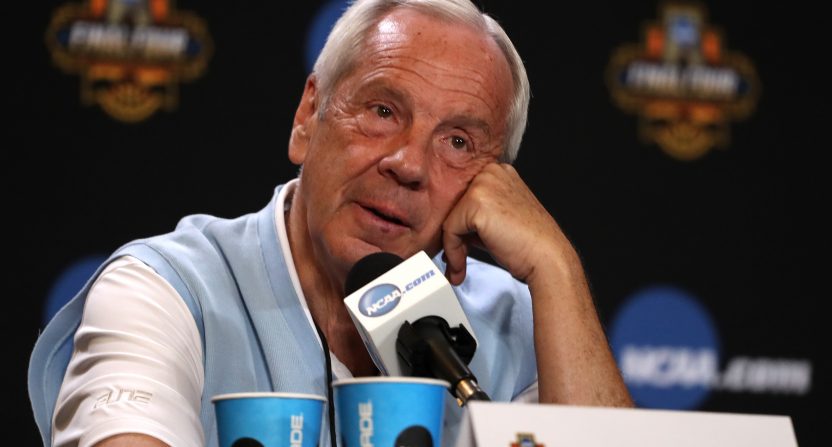 No matter what happens in the Final Four this weekend, on Monday night college hoops will witness something special. Either Roy Williams will join an elite echelon of coaches with three national titles, or someone else will be getting on the board with his first championship.

We typically remember coaches by their championships, or lack thereof. So there’s a lot on the line for the legacies of all four Final Four coaches in Phoenix.

Williams is as good of a basketball coach as you will find, but for some reason he does not get as much love as Mike Krzyzewski, Tom Izzo, etc. But here’s a guy coaching in his ninth Final Four and vying for his third national title in the last 13 seasons. He was also one shot away from winning last year’s championship.

As College Basketball Talk‘s Rob Dauster and former Tar Heel Marcus Paige discussed this week, maybe the lack of respect has to do with Williams’ up-tempo, freewheeling style or his relatively low profile in the media. Maybe it’s something else entirely.

Williams has done his career’s work at two blue blood programs, unlike a coach like Krzyzewski at Duke or Jim Calhoun at UConn, where those guys built programs out of nothing.

But neither Kansas nor North Carolina was in terrific shape when Williams arrived. Kansas had just won a national championship, but the Jayhawks were on NCAA probation in Williams’ first year. North Carolina had been in the process of shaking off a handful of mediocre years ever since Dean Smith retired in 1997.

But winning three national titles is something very few coaches have achieved. John Wooden of course won 10 at UCLA. Coach K has five at Duke, and Adolph Rupp had four at Kentucky. Then comes Calhoun and Bob Knight and, potentially, Roy Williams with three. That’s an elite group.

And keep in mind that if North Carolina cuts down the nets on Monday night, Williams will have won all three in a 13-season span, something only Coach K and Calhoun have done since the NCAA Tournament expanded to 64 teams in 1985.

At that point, it would be impossible to deny Williams a spot among the top five college basketball coaches of all time.

Reaching his first Final Four has already helped Few gain a ton of respect, but imagine what people will be saying if he actually leads little Gonzaga to a national title?

Back in the early 1990s, Gonzaga was one of the worst Division I jobs out there. Poor location. Poor facilities. No NCAA Tournaments in program history. By the time Few became the head coach in 1999, Dan Fitzgerald had already taken the Zags to their first NCAA Tournament and Dan Monson built on that with an Elite Eight Run. Even so, Few was an instrumental part of building those teams as an assistant since 1990.

And then the program truly took off under Few, cracking the Top 25 for the first time ever in his first season and developing a national player of the year in Adam Morrison.

Getting Gonzaga to the Final Four is already among the most amazing career coaching achievements ever. But equally as amazing, this postseason run still has not silenced the doubters.

“They got a lucky non-goaltending call against Northwestern.”

Beating No. 7 seed South Carolina in the national semifinal likely wouldn’t change the minds that still haven’t changed. But getting a crack at Oregon or especially North Carolina for a national title? That’s where Few can make a statement that his little program can take down the biggest programs on the biggest stage.

Here’s where things get a little dark.

Altman is undeniably among the top tier of today’s college basketball coaches in terms of creating a potent on-court product. He’s brought three different programs to the NCAA Tournament, and now he has his first Final Four appearance.

But the large (though often ignored) splotch on Altman’s resume is when three of his Oregon players allegedly raped a female student. All three players were dismissed from the school, but when it became clear that one of them, Brandon Austin, had previously been suspended at Providence for sexual assault, it also became clear that Altman had mishandled his program.

On Thursday, Rob Dauster of College Basketball Talk wrote a column on this and hit the nail on the head:

The cause for Austin’s suspension did not become public until March 18th, when the Wall Street Journal reported the details of the allegations, but it was the worst-kept secret within basketball circles.

Which means one of two things happened, either:

There’s no middle ground there.

Either Altman didn’t do his job, accurately vetting why a player had been suspended, or he lost a bet on whether or not a kid he brought into his program was actually a predator.

So a national title would help Altman gain respect as one of the best basketball minds in today’s game, which he is. But it would also make forgetting about his past mistakes even easier, which is highly unfortunate.

Martin undoubtedly has the least pressure on him compared to the other three coaches. In fact, he really faces no pressure because South Carolina was never supposed to even be here.

Martin has brought two football schools, South Carolina and Kansas State, to the Elite Eight, and now he has the Gamecocks in the Final Four and two games away from their first-ever national title. This program had not made the NCAA Tournament since 2004 and had not won an NCAA Tournament game since 1973. Even during its “glory years” back in the early 1970, South Carolina never made it past the Sweet 16.

So this is a big deal.

If South Carolina wins the whole damn thing, we shouldn’t crown Martin the greatest coach of all time or anything. He’s still just 51 years old with a little more than 200 career wins.

But a South Carolina title would be among the most remarkable tournament runs by any coach in the history of college basketball.