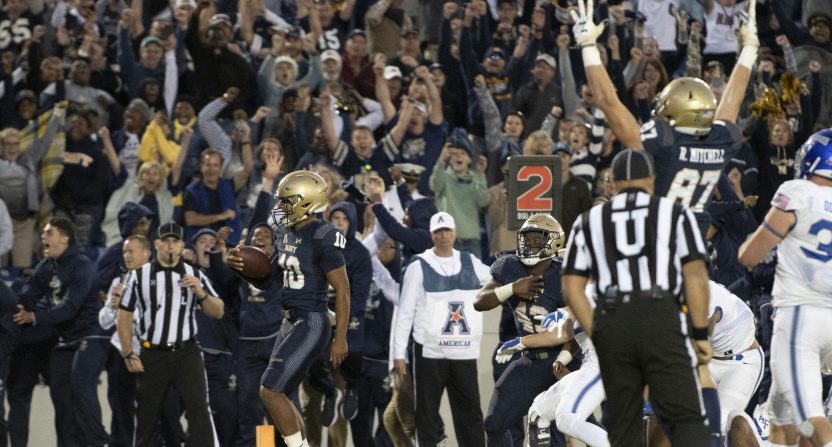 The beautiful thing about college football is they play 60 minutes for a reason. On Saturday, Navy blew a 21-9 lead at home in the fourth quarter and trailed Air Force with three minutes to play. For a team based on that signature triple-option offense, this seemed less than ideal for the Midshipmen, but Navy managed to pull off a 34-25 win.

Air Force trailed Navy 14-6 at halftime and trailed 21-9 going to the fourth quarter. While Air Force was settling for field goals, Navy was scoring touchdowns. That’s a bad exchange for any team, but the Falcons found their scoring touch in the fourth quarter with a pair of touchdowns runs by Donald Hammond III and Taven Birdow. Hammond’s touchdown came on a drive that followed a Navy fumble, and Birdow’s score gave Air Force its first lead since a 3-0 lead in the first quarter.

.@AF_football storms back in the 4th to take the LEAD!

Everything was starting to look great for Air Force. The 25-21 lead forced Navy to need a touchdown with just over three minutes to play in the game. Considering that the Midshipmen offense is more tailored to pound the ball on the ground and consume the clock, this was not the ideal situation for Navy. But ironically, Navy’s push for a go-ahead touchdown started with a pass, an 18-yard gain to start the drive. Shortly after a holding penalty, Navy’s Malcolm Perry connected with CJ Williams for a 32-yard gain. Suddenly, Navy was in Air Force territory with timeouts in their pocket and time to spare.

Navy burned their final timeout before a 4th & 1, which was converted with a short push from Perry to keep hope alive. With 42 seconds to play, Perry again went to work on the ground for a pickup of 11 yards to get the ball down to the three-yard line with the clock running. Perry then gave Navy the lead for good.

And, just for good measure, Navy added one final defensive touchdown as Air Force tried to pull off a miracle.

This was a solid win for Navy. A year after seeing another drop in the win total, Navy is off to a 3-1 start (the lone loss coming against Memphis) and is already one win closer to reclaiming the Commander-In-Chief’s Trophy (the trophy that goes to the winner of the Army-Air Force-Navy series; Army currently owns the trophy). This may not be one of the better Navy teams Ken Niumatalolo has had in Annapolis, but a 3-1 start to the season with a win against Air Force certainly suggests Navy is having a good bounce back this season. And there are still some very winnable games on the horizon for Navy.

This is also a good win for the American Athletic Conference. In the Group of Five conversation, any win against another G5 conference is good to have, especially when they come against the Mountian West Conference. Air Force and Navy may not figure into the New Year’s Six race, but conference data points are good to have for whoever comes out of these two conferences. This is especially true in a season that has seen the Mountain West score some solid wins against power conference competition.