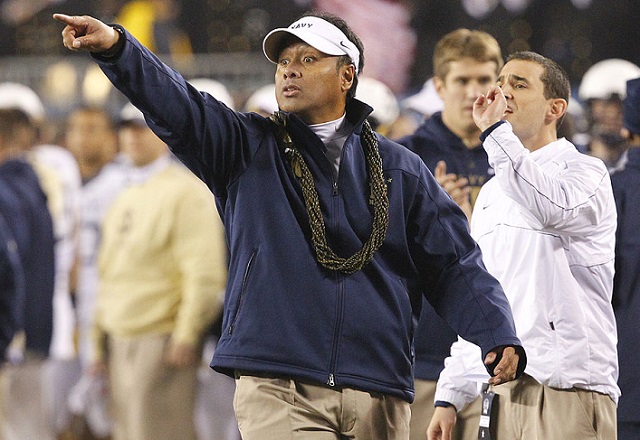 Navy head coach Ken Niumatalolo led the Midshipmen to one of the most successful seasons in the academy’s football history. That led to speculation over his job status and repeated name-dropping for head coaching opportunities at places like Iowa State and BYU.

That interest got Niumatalolo a brand new contract with Navy, according to the Capital Gazette‘s Bill Wagner. Exact terms of the deal were not announced, but Navy athletic director Chet Gladchuk said an increase in base salary was among the considerations in the new agreement.

“We reworked things a bit for Kenny as a show of appreciation for a job well done,” said Gladchuk. “We have always treated Kenny fairly with regard to compensation and this is just a continuation of that mindset.”

Niumatalolo earned $1.7 million this past season based on USA Today‘s annual coaches salary database, and led the Midshipmen to a 10-2 season and a 7-1 mark in their first season as members of the American Athletic Conference. As a result, Navy will play in the Military Bowl against Pitt out of the ACC. A win would give the Midshipmen 11 victories, the most in school history.

That kind of production with what is a difficult pool of players to choose from got other schools thinking of poaching his services.

However, it appears that BYU’s interest in Niumatalolo compelled Navy to rework his contract. The Cougars were serious contenders for his services, especially with the coach’s Mormon background and his son, Va’a, currently playing on the team. But even those draws were not enough to overcome an 18-year history at the Naval Academy.

That increased salary probably didn’t hurt in making this decision either.

The Capital Gazette report indicates that Niumatalolo’s salary may have been much higher than the reported $1.7 million, with escalators kicking in since that 2011 contract signing. What is unclear is just how much this new deal is worth, how long the extension is or buyout terms it may include.

Perhaps most interesting is Niumatalolo choosing to stay based on what Navy could offer to his staff. It appears the athletic department has really stepped up in competitive salaries for assistants more than anything given to himself.

One just needs to look at the situation of Shaun Nua, who had announced he was leaving for a job as the defensive line coach at Virginia, where former BYU coach Bronco Mendenhall has just been announced as the head coach. Instead, the new contract situation for Niumatalolo was enough to promote Nua and entice him to stay on the Navy staff.

“I’m very grateful that Shaun stayed. He made his decision based off me leaving. When things changed, he had to reconsider,” Niumatalolo told Wagner. “Even though he’s twice my size, Shaun is like my little brother and I try to take care of him. He’s done a phenomenal job of coaching the defensive line this season and it’s huge that we were able to keep him here.”

The secret to success in college football is being able to find and keep quality assistant coaches and recruiters on staff. In the case of Navy, that has been increasingly important as this program continues to produce winning seasons.

With Niumatalolo back, can this team become a consistent threat nationally minus Keenan Reynolds? That will be the real question facing this squad heading forward.