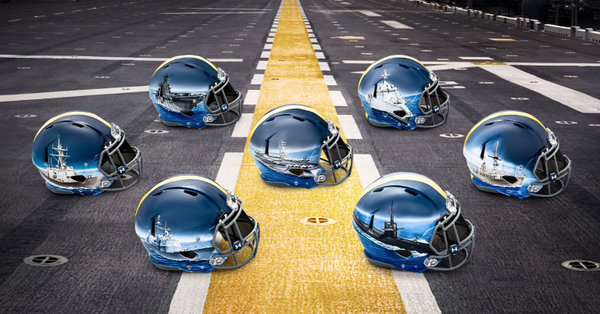 Navy has partnered with Under Armour to release an awesome set of “Navy Fleet” uniforms and helmets which will be worn in this year’s Army-Navy game. There are seven different helmets, all of which are hand painted, reports ESPN’s Darren Rovell.

Here are the @UAFootball "Navy Fleet" uniforms and helmets the Mids will wear for Army-Navy! pic.twitter.com/S4OU0n7f7z

Here’s info on the helmets per the school’s website.

Design Details:
• Uniform font replicates the design and font used on Navy ships • Battleship gray color featured on the cleats, baselayer sleeves and jersey shoulders • Eagle, Globe and Anchor Marine logo highlighted on the uniform pant • Baselayer features the overhead sketch of the seven Naval ships featured on the helmets • “Damn the Torpedoes!” scripted on the uniform pant and jersey hem as a reminder of the historic battle cry that rallies the US Naval Fleet

• Linebacker: Cruiser- Provides anti-air defense and packs the biggest punch of Naval surface ships representative of the linebackers on the Navy football team
• Defensive Back: Destroyer- Known for significant fire power, speed, and anti-missile defense as are Navy’s defensive backs
• Wide Receiver: Submarine- Predominantly utilized as blockers, wide receivers play a key role in driving the Navy rush attack, taking on a stealth-like persona as they blend into the rhythm of the offense but bring significant fire power when called upon, just like a Naval submarine
• Lineman: Amphibious Assault Ships- Just as a lineman’s job is the create a hole for a running back or linebacker, these ships are utilized to establish the “beach head” that enables the invading force to gain access and ultimately accomplish their objective
• Quarterback: Aircraft Carrier- The QB of the Naval Fleet, the aircraft carrier is the ultimate decision maker; the “quick strike” weapon of the Naval fleet
• Running Back: Littoral Combat Ship- Like running backs, these fast and nimble ships can navigate through both crowded shallow and deep waters
• Kicker/Special Teams: Minesweeper- Much like the specific task of the Navy special teams, this small ship has a unique mission of identifying and eliminating mines

The work on the helmets is outstanding.

The new gear will be shown off on Dec. 12th when the Army Black Knights face off against the Navy Midshipmen at Lincoln Financial Field in the 116th Army-Navy Game.