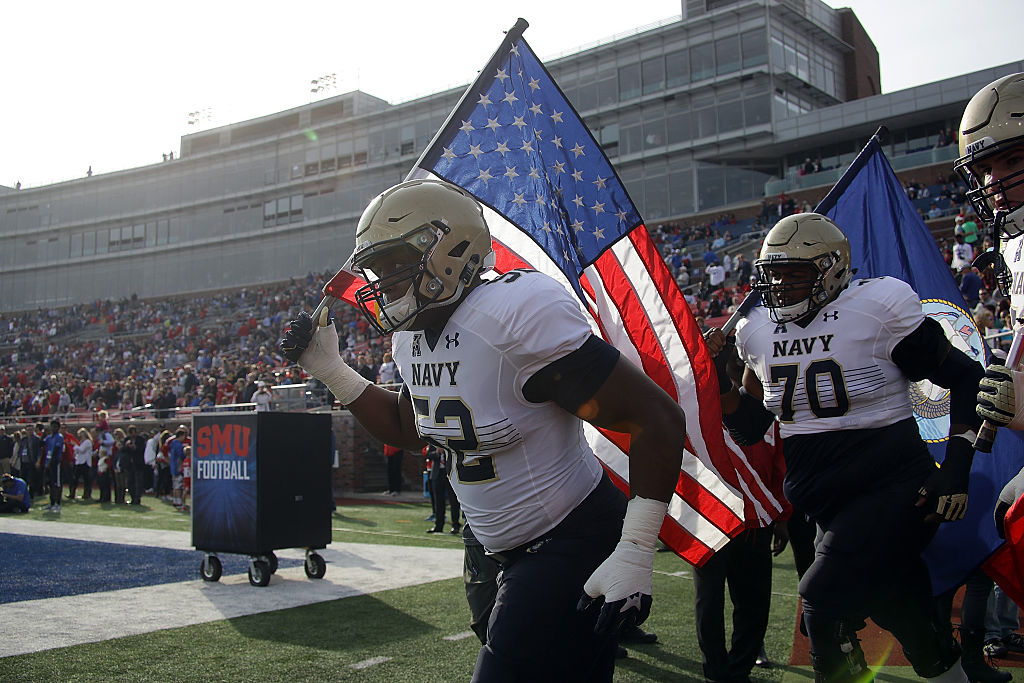 The Navy Midshipmen football team is 9-2 and slated to face off against Temple in the American Athletic Conference Championship game on Saturday. If Navy wins, it’s likely very few bowl announcements would be made on Sunday.

In the most recent College Football Playoff rankings released on Tuesday, the top two Group of 5 teams were #17 Western Michigan and #19 Navy. If Western Michigan loses on Saturday to Ohio and Navy beats Temple, Sunday could be a looooooooooooong day.

Here’s how it works out:

The Group of 5 gets a New Year’s 6 bowl big to the Cotton Bowl on January 2nd and will face an at-large bid from a Power 5 conference. As it stands now, the Group of 5 representative will likely be Western Michigan (12-0) or Navy (9-2).

If the Broncos lose and the Midshipmen win, it’s possibly Navy would jump over Western Michigan in next week’s playoff rankings. However, those wouldn’t be the final rankings because Navy is scheduled to battle Army on December 10th. If Navy were to win that game, they’d stay ahead of Western Michigan in this hypothetical scenario. If they lose, they could fall behind.

“I don’t want to be un-American,” one bowl official told ESPN, “but nearly everyone in the bowl industry, quite frankly, is rooting against Navy.”

What this would all create (and remember, this can only happen if Navy wins this weekend and Western Michigan ideally loses) is a delay in announcing pretty much every bowl that includes a Group of 5 school.

In short, as a source to ESPN put it, a Navy win this weekend could “paralyze” the bowl system.

Think about it – if schools don’t know what bowl they are going to until December 11th instead of December 6th, that impacts planning travel, buying tickets, fans attending, practices, hotels, and so much more.

Especially since the bowl season starts on December 17th with five bowls, all of which include schools from the Group of 5.

“If the committee believes the result of the Army-Navy game could affect Navy’s ranking and therefore its place in the playoff or its selection as the Group of 5 representative, only the pairings that affect Army and Navy would be delayed until after the Army-Navy game,” College Football Playoff executive director Bill Hancock said.

This all is a result of a June 2015 rule change when the College Football Playoff changed its rule so final rankings would be delayed until after the Navy-Army game (which is always the last of the regular season) if it were to impact the playoff field or Group of 5 New Year’s Six bowl bid.

Our own Kevin McGuire proposed a solution that seems a bit too simplistic for the bowl committee.

Navy already has spot in the Armed Forces Bowl. MAC & AAC can set up all other bowls and WMU can take Navy's spot in AFB if Navy goes NY6.

I know the Armed Forces Bowl would much prefer to have a service academy, but is this really that hard? https://t.co/N9jHfReryC

You can read more about the chaos in a piece we wrote last week on the topic right here.