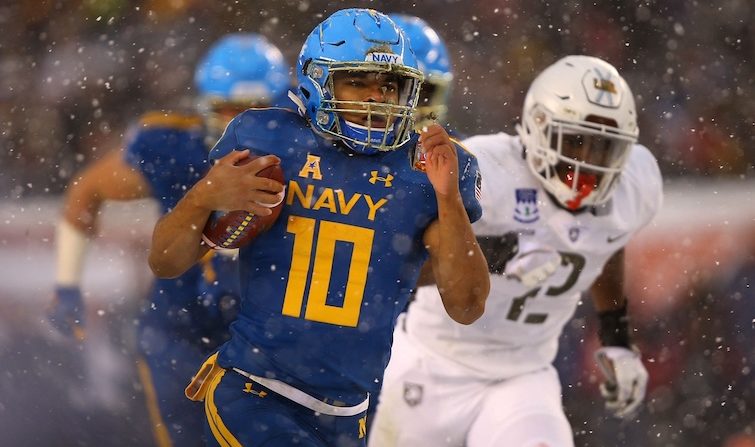 For fans not quite ready to let go of regular season college football before bowl season begins next week, the annual Army-Navy game is often a compelling end of the campaign. The 118th meeting between the Black Knights and Midshipmen has been no exception thus far, due in part to a snow-covered field at Philadelphia’s Lincoln Financial Field.

But the star of the show in the first half has been Navy quarterback Malcolm Perry, putting together an exceptional performance in Ken Niumatalolo’s triple-option offense.

Army took an early 7-0 lead on a three-yard touchdown run by Darnell Woolfolk, followed by a 28-yard field goal near the end of the first quarter by Navy’s Bennet Moehring to make the score 7-3. But soon thereafter, the Midshipmen got the ball back and Perry streaked through a crease on the right side of the line and sprinted for a 68-yard touchdown to give Navy the lead.

Navy took that 10-7 lead into halftime and had the ball to begin the second half. On their first drive, Perry again made a dazzling run on a 3rd-and-3 from the Navy 42-yard line. Keeping the ball and dashing through a gaping hole opened up on the left, the Navy quarterback ran for another 64 yards to the 11-yard line.

The Midshipmen weren’t able to get the ball in the end zone after three more runs, settling for a Moehring 24-yard field goal to increase Navy’s lead to 13-7.

That’s where the score stands as the fourth quarter begins in snowy Philadelphia. After three quarters, Perry has 208 yards rushing and a touchdown on 21 carries.