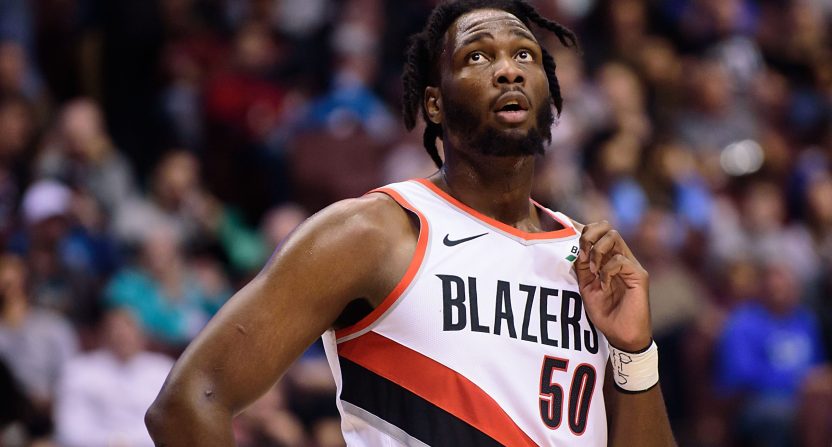 The Boilermakers’ basketball team’s official Twitter account tweeted Tuesday that Swanigan has suddenly passed away at only the young age of 25 years old. He reportedly passed due to natural causes, according to the Allen County Coroner’s Office in Fort Wayne, Indiana.

Our thoughts and prayers to Caleb Swanigan’s family and friends. The world lost a gentle soul last night.

Swanigan was a star during his time with the Boilermakers, averaging 18.5 points and 12.5 rebounds in his sophomore season at the program in 2016. That was was good enough for him to win the Big Ten Player of the Year award that season and get him drafted in the first round of the 2017 NBA Draft.

His NBA career didn’t exactly go to plan. He bounced around between the Portland Trail Blazers and Sacramento Kings during his short three years in the league from 2017-2019.

Regardless, this news has clearly shaken many around the NBA and college basketball. Many took to social media on Tuesday morning to express their sadness on the tragic report.

Such sad news to wake up to today. Former Purdue star and NBA player Caleb Swanigan has passed away.

Swanigan was 25 years old. I first met him when he was on the AAU circuit and he was always such a nice, sweet kid. Had a tough road. Will be sorely missed. https://t.co/VfA9fPrVN8

Caleb Swanigan has died at the age of 25. https://t.co/ZTyZBlROvh

This is HEARTBREAKING news.

Prayers to his family!

Every day is indeed a gift. https://t.co/bX82Dgbxcy

My thoughts and prayers to Caleb Swanigan’s family 🙏🏻 https://t.co/IHMGWTAWcw

While Swanigan’s NBA career didn’t pan out, he is very clearly a huge success story considering his situation growing up.

He was once homeless and obese before turning around his life, becoming a five-star college basketball recruit, and making it all the way to the NBA level.

A picture surfaced of Swanigan last year that appeared to show him far larger than he was while at the NBA level, with many seeming to think that the mental and physical effects of the COVID-19 pandemic played a big role in his departure from the NBA.

Caleb Swanigan lost his career in the pandemic, lost his lifestyle, and seemingly (based on the pics/news that came out) turned to coping mechanisms. It seems he lost his health, both physical and mental, unsure of what to do, where he was going. So very relatable, and so tragic.

This is incredibly saddening news regarding a true former college basketball star, and by all accounts an overall great person.