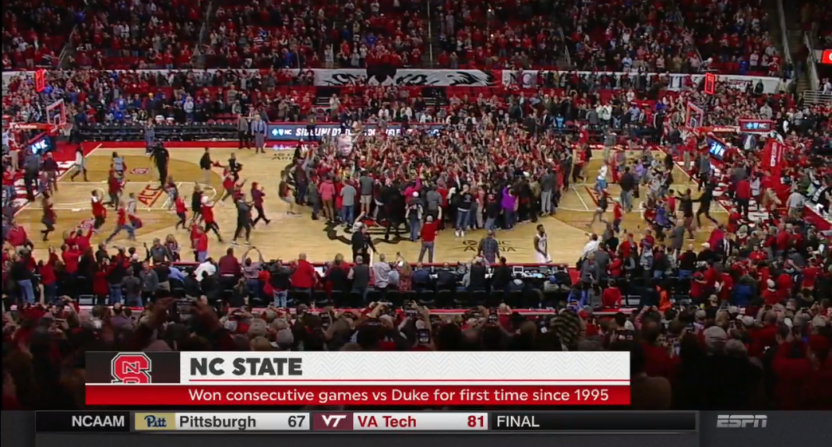 After entering the game as 12-point underdogs, the NC State Wolfpack took down the No. 2 Duke Blue Devils 96-85 on Saturday night in Raleigh.

NC State got valuable production from all eight of their active players to pull off the upset. The Wolfpack didn’t have a single player score over 16 points (which is crazy when talking 96 points overall), but had six players in double-digits.

The play that served as the dagger came on what turned into a four-point play for Torin Dorn with just over a minute left:

NC State’s win is even more impressive when you consider they were able to still do it with Duke big man Marvin Bagley III going off for 31 points (on 11-of-14 shooting from the field, 9-of-11 at the line), and point guard Trevor Duval scoring 18 points for the Blue Devils.

But while those two Duke stars combined for 49 points, NC State’s defense also got them to combine for 13 turnovers (five for Bagley, eight for Duval).

And while NC State got production from every player, Duke only got four points from their bench, which continues to be an issue.

Duke has two points and 18 minutes from its bench tonight. I asked Mike Krzyzewski about the lack of bench production weeks ago, and he said, "The primary people to develop are the ones who play the most minutes." Wanted his starters to be comfortable playing 30-plus minutes.

Duke will still usually be able to win thanks to their insane star power alone, but will likely need better production out of their bench to get deep into the NCAA Tournament.

Speaking of the NCAA Tournament, could we see the Wolfpack in it?

NC State is now 11-5 (1-2 in ACC play), and are 79th in the country according to Ken Pomeroy’s rankings (up from 90 before the win). But they now have impressive wins over Duke and Arizona, and if they can pile on some more wins in ACC play, they should at least be in the tournament conversation.

NC State is going to have a VERY interesting resume come March if they can get to 18 wins. Wins over Duke and Arizona.

The Wolfpack will have another chance to boost their resume on Thursday when they host a Clemson team that is 14-1 and 3-0 in ACC play.