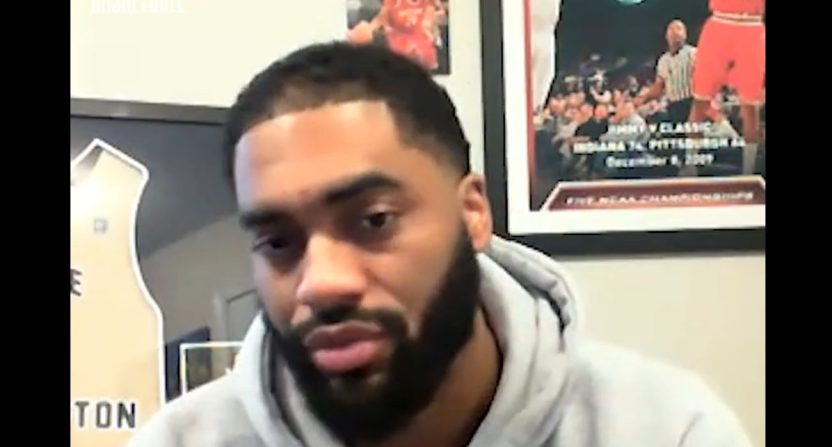 As Russia launched its military invasion of Ukraine last month, American-born basketball player Mo Creek quickly found himself in the middle of a war zone.

Creek had been living and playing professional basketball in Ukraine for the last three years and was just two months into his contract with MBC Mykolaiv when the invasion began. Two weeks removed from fleeing the war zone, Creek joined Fran Fraschilla’s SiriusXM podcast World of Basketball to discuss his escape.

The 31-year-old, who played college basketball for Indiana and George Washington from 2009-2014, recalled being on the phone with his mom when he heard the sound of nearby bombs. Shortly after, Creek went to a bomb shelter with his assistant coach Terry Murphy.

“We were just terrified and when we heard that the siren went off and you know when that siren goes off that means a war has started,” Creek said. “Coach Terry…picked me up to go to his apartment building which has a bomb shelter in it and that’s when I started the bomb shelter experience.”

During four terrifying days after Russia’s invasion, Creek spent hours at a time in the bomb shelter before safely escaping to Moldova.

“You had to see the soldiers with guns. You had to see the tanks,” Creek told Fraschilla of his trip across the border. “See everybody going in the same direction as you so now there’s traffic. So I was scared to death about that because something may have happened. I didn’t want the car to stop moving because I felt like if the car stops, we’re stopping our progress, that gives them the opportunity to do whatever they need to do.”

Creek acknowledged wanting to leave Ukraine sooner, amid warnings that Russia’s military invasion was looming, but he had difficulty breaking his contract with MBC Mykolaiv and needed money for a plane ticket. Once he made it to Moldova, Creek arrived back in the United States within a couple of days.

“I got on that U.S. soil, and it felt like a weight was off my shoulders,” Creek said. He reunited with his mom and family at Dulles Airport in Virginia on March 3, adding “that hug was everything, that’s when I knew I was home.”