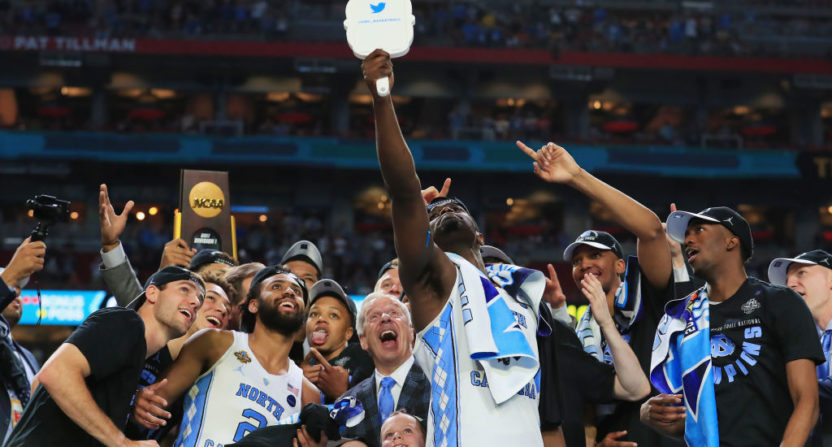 Of all the entities surprised to learn that the FBI had been investigating a collection of college coaches and athletics departments leading to multiple arrests last month, perhaps none was bigger than the NCAA itself. The governing body that stood watch over college basketball while various coaches and ADs were allegedly cutting deals with sneaker companies to drive recruits towards specific schools was left looking helpless when it realized the FBI didn’t even bother to notify them of the investigation, perhaps out of fear that they’d bungle it.

We just can’t imagine why the FBI might think the NCAA wasn’t very good at that kind of stuff.

Because they’re required to do something, NCAA President Mark Emmert announced the formation of a Commission on College Basketball, whatever that is. Emmert kicked things off with a fire and brimstone shakedown, or at least a carefully worded PR-friendly version of one.

The recent news of a federal investigation into fraud in college basketball made it very clear the NCAA needs to make substantive changes to the way we operate, and do so quickly. Individuals who break the trust on which college sports is based have no place here. While I believe the vast majority of coaches follow the rules, the culture of silence in college basketball enables bad actors, and we need them out of the game. We must take decisive action. This is not a time for half-measures or incremental change.

Apparently, the time for half-measures and incremental change was the preceding 100 years.

Anyway, the point of the commission is to examine “critical aspects of a system that clearly is not working.” The commission has three specific areas of focus.

The first covers the relationship between the NCAA, member institutions, student-athletes, and coaches with various outside agencies such as apparel companies, AAU leagues, and agents or advisors. These relationships were central to the FBI investigation that took down coaches from Arizona to Auburn to Louisville. The second covers the NCAA’s relationship with the NBA with an apparent focus on the “one and done” rule and how that plays into these scandals.

The second covers the NCAA’s relationship with the NBA with an apparent focus on the “one and done” rule and how that plays into these scandals. The unsaid question seems to be that if the NBA were to get rid of that rule, would it alleviate these kinds of illegal situations because the players often caught up in financial schemes would bypass the NCAA anyway?

The third area pertains to the relationship between universities and the NCAA’s stated desire for transparency and accountability. This one contains a lot of jargon and fancy words but basically boils down to whether or not the current system for sussing out corruption and infractions actually works or if it needs to be changed (we all probably know the answer to that).

The commission will be chaired by Dr. Condoleezza Rice, whom college fans will remember from her stint on the college football playoff committee (amongst other things). Meanwhile, the commission membership includes a cross-section of educators, government leaders, business people, and former student-athletes. Some of the names include former college and NBA stars Grant Hill and David Robinson, former college coaches Mike Montgomery and John Thompson III, former Florida athletic director Jeremy Foley, and current Ohio State athletic director Gene Smith.

The commission will have its first discussion in November and has a goal to present reform measures by April 2018.

Will the commission be able to change anything? It’s too soon to say and too hard to tell. College athletics is a house of cards built on rules and regulations from a time long before million-dollar sponsorships and billion-dollar TV deals. With each new innovation and advertising deal, the strain between the stated goal of supporting amateur athletics and making handfuls of money puts the NCAA at odds with itself. Changing the rules doesn’t change that problem at the center of the discussion.

Maybe the FBI can figure that out next.