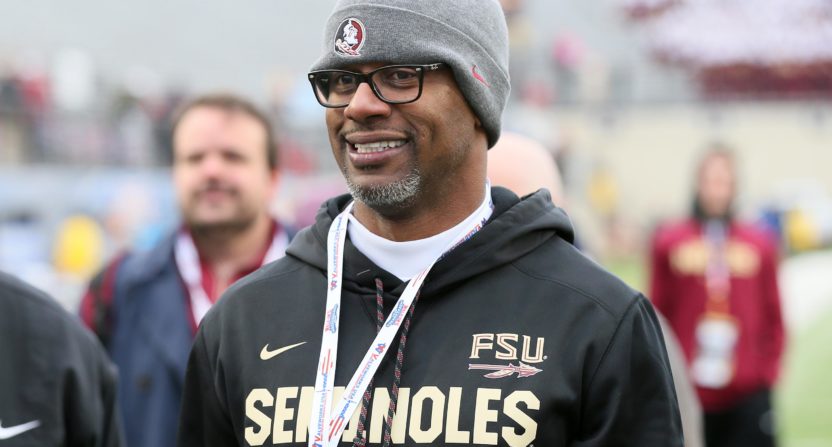 The transfer situation in college sports is a mess. Here is how the current basic rule works out in college: if a player wants to transfer, they would have to sit out all of next season (the 2018-19 school year) before being allowed to play again during the 2019-20 season. However, if a coach decided to leave his current school for another job, the coach would be able to start working at their new school immediately, and the players would be screwed.

That simple rule has ruffled plenty of feathers in recent years as players must sit out, but coaches can easily jump from one program to the next. This current college football offseason has lit a fire under the transfer debate, as high profile coaches have left low level and high level programs for what they assumed were better jobs.

Back in September, one proposal for altering the transfer rule picked up momentum, but was then met with backlash. The new rule would have allowed players to transfer and play right away, which plenty of college basketball coaches hated. This proposal has slowly died out and isn’t talked about all that much today.

In December, our Jay Rigdon argued that athletes should be able to transfer however and whenever they want. While I’m not on board for that plan because of how it could essentially create an NCAA free agency where all the good players transfer to the same school, I am a fan of the newest official proposal making the rounds at the moment.

According to Dennis Dodd at CBS Sports, this is what the newest proposed transfer rule looks like:

“Athletes would be allowed to transfer schools without restriction if their coach were fired or left for another job as part of sweeping proposal that is making its way through Division I, CBS Sports has learned. However, athletes would not be permitted to follow the departing coach to their new program.”

“The proposal, which originated from the Big 12, would also allow athletes to transfer without sitting out a season (as currently mandated by NCAA rules) in the event a postseason ban is handed down by the NCAA as punishment to their program.”

“The traditional academic “year in residence” for transfers in all other situations would still be in place and extended to every sport. Presently, that is only a requirement in five NCAA sports.”

Sign me up for this new rule. According to Dodd, this was created by athletic reps at Baylor and Iowa State and has already been met with positive support.

While all student-athletes still wouldn’t be able to leave their programs and immediately play at their next school as undergrads, they would have more freedom should their coach leave. I love this idea because a lot of what draws a student-athlete to a school is the coach.

When someone like Willie Taggart packs up his stuff and leaves the University of Oregon for Florida State after just one year, you see him go on and recruit the same high school players for FSU that he did at Oregon. While his previous student-athletes at Oregon would not be able to follow Taggart to FSU like recruits still in high school could, it allows Oregon players freedom to leave should they not like the new coach.

Too often these days, head coaches leave their previous programs for greener pastures. In 2018 alone, there will be 22 D-I programs with new head coaches, some of which were previously head coaches and others who were assistants or coordinators.

What this really means is that there are hundreds of D-I players who could be playing under a head coach in 2018 that didn’t recruit them, don’t get along with them, or whose system they don’t fit into. What this also means is there are hundreds of players who, if they don’t want to play under their new head coach, they either have to suck it up and play or sit out an entire year until they can play somewhere else…assuming the school they want to transfer to doesn’t lose their head coach in that year.

That needs to change, and this new proposed rule finally gets the ball rolling in the right direction.

The head coach of a college program is someone that student-athletes look up to and trust with their future. If that coach is fired or leaves for their own personal reasons to take the same job at a different school, why shouldn’t the student-athletes they leave behind be able to do the same?

“I think it’s a phenomenal idea,” Pollard said. “There’s holes in it. There will always be, but it’s the best thing I’ve seen out there so far. It’s a lot better than where we are heading.”

As of now, Dodd points out a Division I Transfer Working Group is working on sending either one or two new proposals for legislation in June. If one of those new rules is accepted, it could be in place for either the 2018 or 2019 football season.

“That’s not why we’re dealing with this issue,” Pollard said. “We’re dealing with it because of football and basketball. Can you name me one high-profile athlete that’s been blocked in another sport? Now we’re going to treat everybody equally. Empower the student-athlete but help them make a sound academic decision.”

If coaches can leave one program and join another without sitting out a year, why shouldn’t student-athletes be able to do the same?