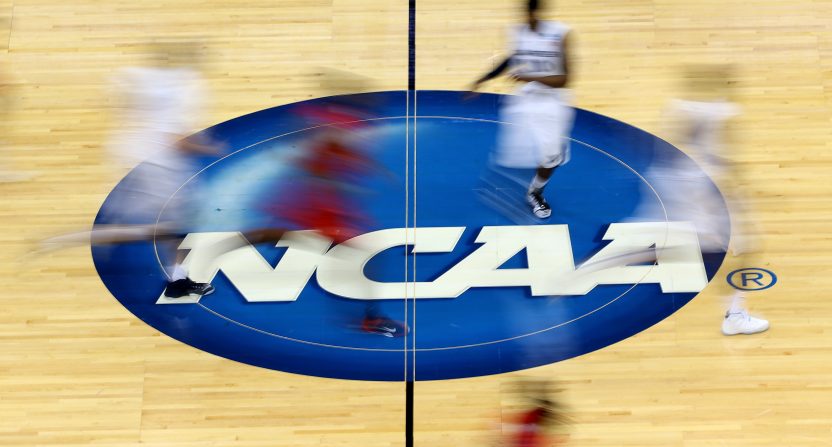 North Carolina’s state government finally came to a compromise to repeal HB2, the discriminatory “bathroom bill” that forced people to use the bathroom of the gender on their birth certificate, not the gender they identify with, in public buildings.

The law forced people like this guy to use the women’s bathroom, and just made life harder in general for people who already face discrimination in society.

Republicans in the state legislature said the law was needed to prevent crimes by men in the women’s bathroom, but statistics and anecdotes show that has never been a problem.

The NCAA concluded that the law was discriminatory, and as such, decided to pull all of its future events out of the state. That included the NCAA Tournament, which moved from the originally-planned Greensboro, North Carolina location this year to Greenville, South Carolina. That move gave 7-seed South Carolina a home-court advantage over 2-seed Duke, which likely helped the Gamecocks beat the Blue Devils.

Duke’s loss, combined with pressure from Duke’s Mike Krzyzewski and North Carolina’s Roy Williams, put pressure on North Carolina Republicans to repeal the law and on Democrats to work with them. The state repealed HB2 by the Thursday deadline set by the NCA, which the state needed to adhere to in order to have any NCAA Tournament bids through 2022.

But there’s one problem: It still might not be enough to get the NCAA Tournament back.

The new law isn’t much different from HB2, and it’s still, on its face, quite discriminatory. The new law, HB142, includes the following:

In practice, very little has changed, writes The Charlotte Observer’s editorial board:

“House Bill 142 literally does not do one thing to protect the LGBT community and locks in HB2’s most basic and offensive provision. It repeals HB2 in name only and will not satisfy any business or organization that is truly intolerant of an anti-gay environment and of a state that codifies discrimination.”

This puts the NCAA in a very interesting position: Is it “truly intolerant of an anti-gay environment and of a state that codifies discrimination,” or is it simply only intolerant of egregiously obvious violations of human rights?

The association still hasn’t made a decision on North Carolina, and likely won’t until at least next week. NCAA president Mark Emmert explained why at the Final Four.

“We’ve tried to do a number of analyses, laying them all side by side, and it very quickly becomes very, very difficult. What distinguished North Carolina was, as you pointed out, there were four distinct problems that the board had with that bill.

“They’ve removed some of those now but not, as you point out, not all of them. And the question the board will be debating: If you remove two or three of them, is that enough, relative to other states?

“So the board — the fact that the board only identified one state that it didn’t want to go to, while recognizing there were 49 other states with various degrees of support or restrictions around LGBT rights and other civil rights issues, it certainly meant that they saw North Carolina as distinctive.

“And the question that’s going to be before them: Is it now still so distinctive that we don’t want to go there? Or is it close enough to where everybody else is in the country that it makes sense to be there?

To its credit, the NCAA has been progressive in standing up to discrimination. The association boycotted South Carolina for events until the state took down the Confederate flag at its capital building, and it even threatened to leave its home state of Indiana if the state’s “religious freedom” law that legalized discrimination on religious grounds was not repealed.

However, this is also an organization that doesn’t exactly go out on a limb for human rights in other ways—it’s the same organization that brings in billions of dollars off of unpaid labor, and pretends it’s protecting that labor by strictly enforcing rules that make sure all of the labor’s monetary value goes back to executives and universities.

Now the NCAA faces the choice of whether it truly wants to go out on a limb for the marginalized, even when it will take some extra explaining. The association will certainly face Republican backlash if it continues to keep its events out of North Carolina, since it was the main impetus for this compromise in the first place. However, it is under no obligation to return events to the state just because it made a tiny concession and changed its language.

For all its faults, the NCAA’s stands against the Confederate flag and anti-LGBT legislation have been good. The question is whether it’s willing to only stand up to egregious examples of discrimination. On that, we just don’t know the answer, but the North Carolina decision will go a long way toward truly understanding just how far the NCAA is willing to go to protect its LGBT athletes and fans.