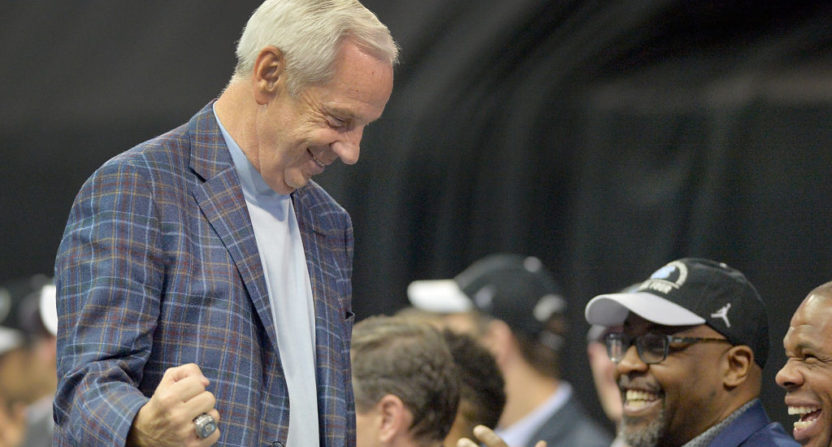 According to their website, the NCAA has seven core values. Chief among them is “the collegiate model of athletics in which students participate as an avocation, balancing their academic, social and athletics experiences.” That’s immediately followed by a desire to maintain “the highest levels of integrity and sportsmanship” as well as “the pursuit of excellence in both academics and athletics.”

If that’s true, there’s no reasonable way to look at their conclusion that it was unclear if the University of North Carolina committed academic violations through the use of fake classes and see it as a failure of their core values and as an institution. According to the NCAA, because non-athletes benefitted from the class, that apparently made the “paper classes” okay, or at least no longer under their purview. The NCAA also deduced that it lacked the evidence to punish the school or it’s athletics programs in spite of a years-long investigation that cited a department chair and a curriculum secretary who engaged in unethical conduct and a failure to cooperate.

In other words, the NCAA passed the buck. It put in the work to make it look like it cares but, ultimately, it doesn’t. At least not about the “student” half of student-athlete. They care when that student-athlete is making money that they don’t see a cut of (or all of), but otherwise, the message sent today is that what happens in the classroom is none of our business. Which, again, seems to go against those stated core values.

The truly sad part is that it feels so unnecessary to get worked up and upset about the decision because it felt so inevitable. The program that was most expected to suffer the consequences, North Carolina men’s basketball, is a cornerstone institution in the sport. They generate millions every year for the NCAA simply by existing. Their mere presence in a post-season tournament generates untold stacks of money that would otherwise go missing. Had the program pulled a Baylor, or even a Louisville, we might be talking about something different. But “all they did” was create a fake class to keep some players eligible. By the NCAA’s own theoretical standards and values, it’s unconscionable in the world of amateur college athletics. But by real-world standards, it would have been more shocking had the NCAA laid down the hammer rather than what they actually did.

And perhaps this is how it should be. Perhaps the NCAA shouldn’t have the authority to come in and smother UNC in sanctions over what happens in a classroom. As CBSSports.com’s Tom Fornelli pointed out, we shouldn’t be rooting for student-athletes to get punished, especially when they would be getting punished for the sins of others.

I’ll never quite understand why some people *want* to see the NCAA punish schools/players.

The answer to that question is found in the fact that the NCAA’s decision does not exist in a vacuum. The NCAA creates its own precedent and it routinely breaks that precedent without seemingly any cause or reason. In other words, they seem to be making it up as they go and when you do that you create a system where some get punished unfairly while others get off easy without much explanation why.

Take what the NCAA handed down to Syracuse men’s basketball in 2015. The program was placed on five years probation, 12 scholarships were taken away over the course of four years, the number of permissible off-campus recruiters was reduced, and head coach Jim Boeheim was stripped of 108 wins as well as suspended for nine games. This was on top of SU’s self-imposed post-season ban in 2015, amongst other things. While the scandal included various violations, the crux of it stemmed from improper benefits that a booster provided to some player and coaches (stipends and gym memberships) and the improper assistance on coursework for basketball player Fab Melo. What most people remember is that a basketball staffer re-wrote a paper for Melo in order to raise his grade and keep him eligible.

On one hand, Syracuse was certainly guilty of breaking the rules, regardless of who knew what and when. On the other hand, is what was described any worse than what happened at North Carolina? Whereas the academic portion of the Syracuse scandal involved one player, the North Carolina scandal involved two hundred “classes” that took place over 18 years, involving hundreds of student-athletes. The scope of the UNC scandal was far greater than the Syracuse one. And yet, while SU’s program felt the brunt of NCAA sanctions, Carolina will basically skate without much beyond self-imposed sanctions.

There are plenty of other programs with similar gripes. None of them are innocent, but many of them didn’t commit “crimes” much worse than what the Tar Heels did. Louisville, UConn, USC, Minnesota. All of them got hit hard by the NCAA over violations ranging from improper benefits to improper academic assistance. All of them likely deserved to face some kind of punishment, but each of them could probably make a compelling case that what happened there either wasn’t worse than North Carolina or wasn’t that much different. The only difference, it seems, was the outcome.

What’s the solution? There probably isn’t one, not for college athletics as it stands. College basketball and college football, the two biggest moneymakers in all of academia, are systems built on a foundation that was never meant to support what it’s become. Long before the days of TV deals, uniform sponsorships, and power conferences, college sports had a low financial ceiling. Now, the sky’s the limit, and no one who profits from the system is going to stand in the way of that. Certainly not the NCAA, whose employee paychecks are dipped in the sweat of the unpaid student-athletes they watch over. They have no incentive to ever “get it right” or “fix the problem.” They are the problem.

A lot of people feel as though with the North Carolina decision, the NCAA has seemingly given green light to colleges to just be a little inventive and hire some damn good lawyers in order to do whatever you want. The irony is that the NCAA gave colleges that green light decades ago. They just pick and choose someone every once in a while to make it seem like they really care about those core values. In truth, the only core value that ultimately matters to them is getting paid.