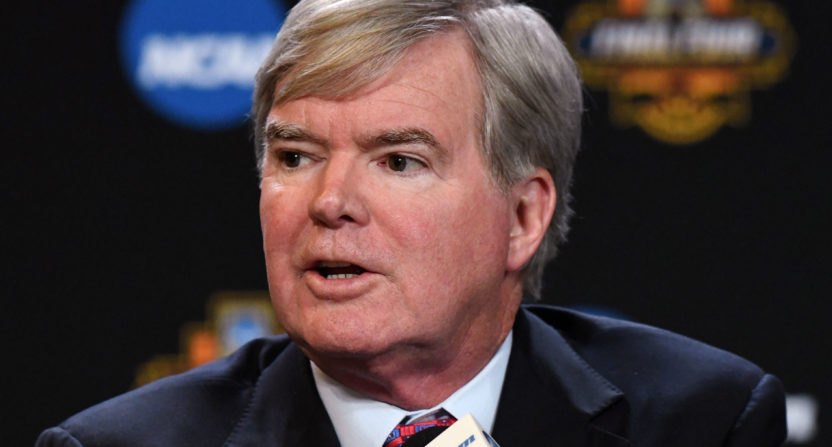 NCAA president Mark Emmert is in a difficult position; he’s the head of a massive organization that makes incredible amounts of money off its revenue sports by not paying its athletes (and preventing them from getting outside sponsorships or other pay), a business model that’s coming under increasing fire but one that Emmert’s bosses at the NCAA’s many member institutions want to keep intact. And the NCAA is facing some particularly thorny questions when it comes to the long-running FBI investigation of several prominent college basketball programs over alleged payments to players; even the most gifted orators in the world would probably have some difficulty discussing this.

But Mark Emmert is no Marcus Tullius Cicero, and he’s again making that increasingly clear with his latest batch of public comments. Those appear to be digging the NCAA an even deeper hole. For example, there’s what he said to Nathan Fenno of The Los Angeles Times in an interview Thursday:

To sit and read a transcript of a wiretap — this is all alleged and everybody’s innocent until proven guilty — but you read those wiretap transcripts and it’s just shocking to hear a conversation where someone’s allegedly just selling a student-athlete to a potential financial advisor who doesn’t have that student or family’s best interest at heart. You look at that and you have to be shocked by the callousness of it.

First off, the president of the NCAA being shocked by under-the-table payments to NCAA basketball players is the least convincing expression of shock since Casablanca‘s Captain Renault, with a similar level of self-enrichment to boot:

But beyond that, the “callousness” here is simply an amazing description. It’s somewhat understandable what Emmert is going for; absolutely, some of these financial advisors have proven to be quite shady and to be skimming money for themselves, and there have been lots of other cases of coaches, teachers, relatives and more getting rich off payments made to obtain the commitments of athletes. In many cases, athletes don’t get the full benefits of that money, and that’s problematic. But this under-the-table system and its increased ease of skimming and corruption exists because the NCAA prohibits above-board payments, and it seems quite probable that even the shadiest financial advisors are likely providing more money to athletes and their families than NCAA schools do.

What do student-athletes get from the NCAA? Well, tuition (as long as they don’t take too-demanding classes that would interfere with their athletic commitments), room and board (with a whole lot of attached conditions on where they can live and when and what they can eat), and now even perhaps a few thousand dollars in cost-of-attendance stipends. Great. To some athletes, those benefits aren’t bad, especially those competing in sports that don’t generate much revenue. But that’s a long way from the actual value revenue-sport athletes are providing to many schools, which is instead spent on ever-increasing coaching salaries and building renovations.

And while there are plenty of debates about if athletes should be paid, or should at the least be able to accept sponsorships, and what the best way to do that is, it’s clear that the NCAA is not actually providing much money to these athletes and their families (even the cost-of-attendance stipend is only designed to offset the extra costs of going to school). That’s their current policy, and advocating for it is fair enough. While there are many convincing arguments that it should be changed, it’s understandable why Emmert is an advocate for the status quo.

But Emmert’s attempt to describe “callousness” by financial advisors who don’t “have that student or family’s best interest at heart” is laughable, and makes the NCAA look even more clownish than normal. In many cases, even the worst advisors are doing more for those athletes and their families than the NCAA is. And if anyone doesn’t have athletes’ best interests at heart, it’s the schools that aren’t paying them for the value they provide.

To his credit, the next paragraph of Emmert’s comments is maybe a little better, and talks about the need to create a pathway to the pros for those able to make that jump (related to the ongoing attempt to shift one-and-done to two-or-none). Here’s what he says there:

I think what it’s done is it’s created enough energy in the college sports world to make the kind of changes that are necessary, that a lot of people have been talking about for years. … There needs to be a professional pathway and a collegiate pathway. If somebody wants to go to college, if they want to get a college education, then they want to turn pro, great. We’ve got a wonderful deal for you. But if you want to be a professional ballplayer, go be a professional ballplayer. Great. Congratulations. … Trying to shoehorn some of that into the college space has created a lot of this problem.

On some levels there, Emmert isn’t wrong. The current one-and-done system forces most prospective American NBA players to go to college for a year (other options include playing internationally, but that’s tough), and making changes so that those hoping to go to the pros don’t have to head to the NCAA could be a good thing. Now, the proposed one-and-done shift to two-or-none doesn’t necessarily improve the overall situation much (it’s better for the few players the NBA has strong interest in  out of high school, but arguably worse for the many more the NBA’s interested in after a year who would now be locked in for twice that time, to say nothing of the way the current proposal would punish those who declare for the draft out of high school, aren’t picked, and then can’t go to college), but its idea of not requiring a year of college before the NBA draft might be a way to deal with some of the challenges here.

But these overall comments from Emmert are still incredibly tone-deaf on many levels, and they’re making the NCAA look even worse. The “won’t someone please think of the children!” arguments tend to work much better if they’re coming from an organization that isn’t doing even less for those student-athletes than the financial advisors in question. The “shocked” is absurd, given how everyone who’s paid any attention to college athletics for the last 60 years or so is aware of the prevalence of under-the-table payments. And the “callousness” is hilarious given the NCAA’s own callousness.

Of course, no one’s expecting Emmert to suddenly see the light and start advocating for paying players, as that’s completely the opposite of what he’s paid to do. But his comments on this FBI investigation make the NCAA look much worse than if he’d just said nothing, the way he did about the defamation lawsuit against the organization from former USC assistant coach Todd McNair. Instead, continuing the tradition of his public comments, he once again stepped on a bunch of rakes: