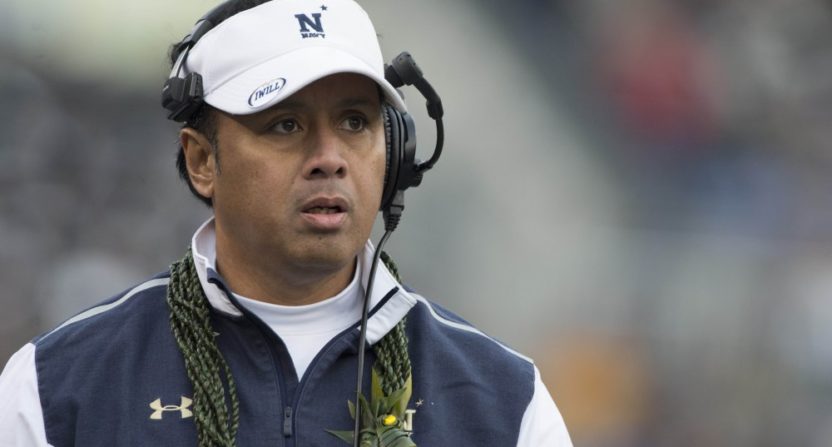 As part of our ongoing preview coverage for the college football season, each week our NCAA staff will respond to a roundtable question. With our focus on the American Athletic Conference this week, we took a look at the issue of coaching turnover within the AAC.

Navy, SMU and Tulsa are the only programs in the AAC to not change their head coach in the past two years, although both SMU and Tulsa are entering the third year under their current head coaches while Ken Niumatalolo remains the longest-tenured coach within the conference by a wide margin as he enters his 10th full season as the head coach of the Midshipmen.

Since December 2015, all but three schools have changed their head coach in the AAC. How much does this impact the stability in the AAC on the football field, and is it a cause for alarm as the conference continues to see coaches leave for higher-paying opportunities?

Matt Lichtenstadter: The success of some AAC programs is largely a double-edged sword for them and their conference. For one, it shows that there are great programs outside the Power 5 that can potentially break that hegemony. But once teams like Memphis, Temple, Navy and others start moving the needle in ways that get Power 5 schools to notice, there’s not much they can do to prevent those coaches from leaving for more money and the Power 5. So while the stability is affected certainly, plenty of programs have proven that they have the chops to be competitive nationally in a conference that doesn’t have the resources the Power 5 ones do.

Andy Coppens: The AAC has had some big-time coaching turnover, but I don’t think it is a call for alarm in the least. Some changes were needed for competitive reasons, others have become really good jobs to take. USF and UCF picked up some really good coaches in their latest changes, same for Cincinnati and UConn too (yes, Randy Edsall is an upgrade).

The good news is that a lot of the coaches that are coming in have actually upped the level of play and competitiveness of the league. I also wouldn’t be worried about the changeover happening. Look around college football, turnover at head coaching positions across the FBS landscape are happening quicker and quicker. There’s also no need for alarm because a lot of the changes are happening because said coaches are leaving for Power 5 jobs… and that usually means you’re doing something right in your current position. The AAC has to know it needs to be a breeding ground for quality coaches to get a chance, and the ADs across the conference seem to understand just who this league is.

Yesh Ginsburg: ESPN ran a tremendous article on this a few months ago, and this could honestly be a selling point for the league. It draws in great coaches because those coaches know that success in the AAC means a shot at a top gig when one opens up.

Sure, every Group of 5 school would love to find a great coach as committed as, say, Chris Petersen was to Boise State, where he stayed for almost a decade through numerous offers from major programs. These schools have to know that the odds of finding lifers are slim-to-none. Instead, the schools have learned to plan accordingly. They build football staffs that can overcome frequent turnover, and they keep a measure of continuity from one coach to the next. I won’t say it’s a positive that coaches keep leaving, but the right format can keep it from being a negative.

Is it cause for alarm? No. The nature of college football coaching is that 95 percent of schools are just stepping stones to the blue-bloods. The AAC is just another conference in that process, and being known as a good stepping stone is a better situation than most other Group of 5 schools are in anyway.

Kevin McGuire: The AAC is in quite a unique situation when it comes to head coaches. It has proven to be a good breeding ground for coaches looking to pursue power conference positions. In the past two seasons, if a coach wasn’t fired or retired, all coaches leaving the conference took a job at a power conference program. This is the perfect stepping stone conference to a power conference job because it is arguably the top Group of Five conference with enough recruiting potential and opportunity to perform on a relatively big stage. The conference may see programs rise and fall quickly due to coaching turnover, but that also leads to new ideas and trends coming into the conference to help advance the on-field product as well.

So there are some pros and cons to being the AAC when it comes to coaching turnover. I’m not really sure which side outweighs the other or if this means the AAC is fairly balanced, but there does not appear to be a reason to push any panic buttons the moment a coach leaves the conference.