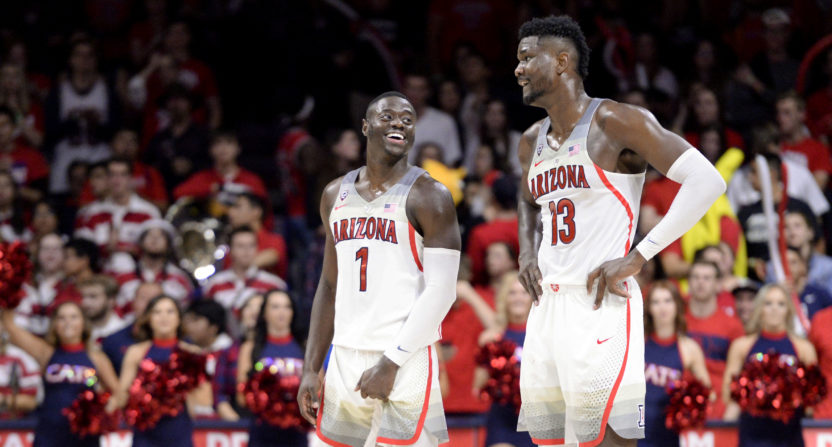 On Sunday, the NCAA tournament committee revealed its top 16 seeds as a sign of where things stand with less than two months remaining in the season. The top 16 bracket reveal showed the selection committee is stressing the number of quality wins above everything else, including the actual “quality” of so-called quality wins, with the new Quadrant system.

The problematic practice of grouping wins and losses by arbitrary cutoffs leads to the unfair presentation of a team’s resume. The NCAA no longer groups a team’s wins and losses by RPI Top 25, RPI Top 50, etc. on the “team sheet” presented to selection committee members. They’ve replaced that system by grouping all of Division I into four RPI Quadrants, which are defined as such:

Ultimately, the committee did a fairly good selecting their top 16 teams with a few strange missteps. Here’s how the reveal looks with one month until Selection Sunday:

Is this what the 2018 Sweet 16 will look like? #BracketPreviewhttps://t.co/PxBQXWxUP0 pic.twitter.com/Rdru8SJez5

To see how the arbitrary groupings become problematic, look no further than the inclusion of Arizona and the exclusion of Rhode Island. The Wildcats earned the No. 4 seed in the West, but delving deeper into the resumes, Rhode Island looks better nearly across the board. The only area where the Wildcats have the edge is three Quadrant 1 wins to Rhode Island’s one.

Meanwhile, Rhode Island was left out despite ranking No. 5 in RPI, the flawed but crucial metric that keeps hanging around as the selection committee’s primary tool. It’s possible the Rams’ exclusion has to do with the addition of predictive metrics being added to team sheets this season, where their average ranking is No. 21. But keep in mind that Oklahoma and Arizona rank even lower than the Rams’ in those metrics in addition to worse standings in resume-ranking metrics like RPI, yet those Power-5 schools snuck in as the last two No. 4 seeds.

The Rams are 1-3 against Quadrant 1 opponents but the quadrant’s arbitrary cutoff has done them an injustice.

Compare that to Arizona, which has wins that count in Quadrant 1 despite being against inferior competition. The Wildcats won at home against Arizona State (No. 26 RPI) and on the road against Utah (No. 58), who is in only one of 78 brackets in The Bracket Matrix. The Wildcats have two Quadrant 1 losses — at Washington (45) and at Colorado (No. 66) — that are both worse than Rhode Island’s worst defeat. And remember, that’s only Quadrant 1. Arizona also has three losses against Quadrant 2 while Rhode Island is 5-0.

The quantity vs. quality problem comes up again when parsing through Sunday’s bracket reveal. Cincinnati received the last No. 2 seed despite its best win being at Temple, which isn’t even in the projected field. However, the Bearcats are 4-2 against Quadrant 1 opponents and 8-0 against Quadrant 2 opponents. In their one game against another team in Sunday’s top 16, Cincinnati got trounced by Xavier. When looking more specifically at who Cincinnati beat and lost to, there’s a clearer picture that the Bearcats are significantly better than other average NCAA Tournament teams, but don’t quite stand up with the elite of the elite. A No. 3 or No. 4 seed would have been more fitting.

And that’s the lesson the selection committee needs to learn. The arbitrary cutoffs can help weed out from the true contenders from their competition, but when it comes to nailing down the precision of seeding, the fairest approach is looking past the Quadrants to see just how much “quality” those quality wins actually possess.