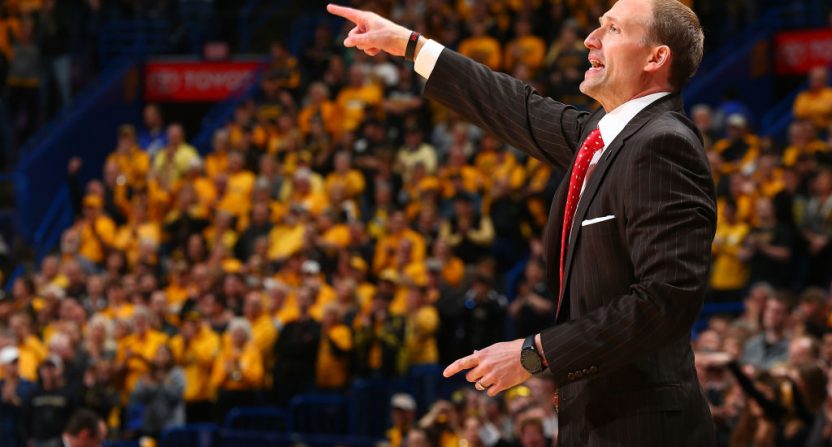 Every year, there seems to be a team with a major gripe with the NCAA Tournament selection committee. This year, that team is the Illinois State Redbirds, who were left out with one of the better resumes on paper.

Illinois State head coach Dan Muller isn’t taking the slight lying down. First he spoke out about the snub from the committee, calling their decision “idiotic.” He went on to ask a legitimate question of exactly how the Redbirds could’ve done more to pad a resume that had them at No. 33 in the RPI.

“What the committee is asking for is not possible sometimes,” Muller said, via the Chicago Tribune. “Our staff probably called 25 of the schools that made it to see if they would play us. What do they want us to do?”

Apparently, a good night’s sleep didn’t change much for Muller, who took to Twitter to issue an open challenge to all Power 5 and Big East schools.

Illinois State’s problem highlights a bigger issue within Division I basketball today. There’s little incentive for any Power 5 team to go on the road against a quality mid-major program, with many Power 5 teams getting killed by the committee for losses against those teams. Meanwhile, the committee asks to see those types of wins out of mid-major programs and often time that requires a one-off road game.

The mid-major team gets screwed with bad home games to try to sell to the public to consume. It also leaves them with limited options.

It isn’t like anyone worth their salt is going to step up to a challenge like Muller has throw out. But perhaps by doing it, the Redbirds head coach is putting a spotlight on a little talked about issue within college basketball today.

Of course, one could say none of this would’ve mattered had Illinois State taken care of business in the Missouri Valley tournament finals against Wichita State. That automatic bid would’ve been nice, but it shouldn’t have been necessary according to the Redbirds.

It wasn’t like the Redbirds didn’t already have a win over the ranked Shockers in regular season play. Still, losses to the likes of Murray State and San Francisco likely killed the Redbirds’ NCAA tournament hopes. The overall schedule didn’t help much either, according to the Chicago Tribune article:

The snub came as little surprise to bracketologists nationwide, most of whom concluded that the Redbirds’ 123rd-ranked schedule and lack of quality wins — they were 1-2 against Wichita State and didn’t play anybody else with a top-50 RPI — would work against them.

But none of that is going to matter now, as the Redbirds have to put it beyond them and take on the NIT challenge in front of them. Illinois State will host UC-Irvine in a first round matchup this week.