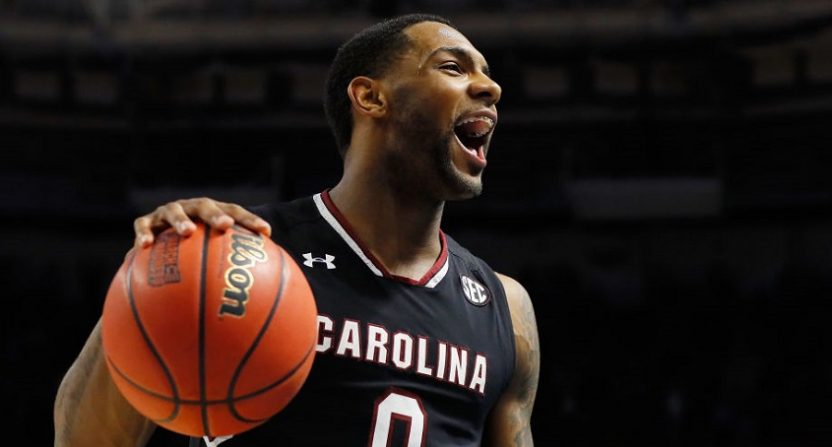 The Comeback’s College Basketball Stock Watch didn’t close once the 2016-17 regular season wrapped up. Now that we’re in the NCAA Tournament, several players and teams are boosting their stock — whether that bodes well for a longer tournament run, hope for next season, or a higher selection in the upcoming NBA Draft — while others have suddenly become less appealing due to poor performance.

Following a thrilling first and second-round in the NCAA Tournament, let’s take a look at two players who boosted their reputation during the past four days, along with another pair that slid down the ranks.

Although No. 2-seeded Duke was one of the favorites to win the national championship, Thornwell and his No. 7 Gamecocks pulled off the monstrous 88-71 upset in Greenville, S.C. The 6-foot-5, 211-pound forward demonstrated his prowess against the Blue Devils, notching 24 points, six rebounds and five assists.

“Us seniors called it a farewell tour and we don’t want the tour to end…” –@LewisJohnsonMG w/ Sindarius Thornwell after win#MarchMadness pic.twitter.com/9ZbVtg93ju

Predominantly in the second half, Thornwell broke down Duke’s zone defense consistently, playing the floor general after receiving the ball at the free-throw line. He also made his mark from beyond the arc, where he knocked down 3 of 6 threes. Ironically, the South Carolina native produced the same results from the perimeter in a 20-point first-round rout against Marquette. He finished the contest with 29 points and 11 rebounds, which guided the Gamecocks to their first win in the Big Dance in 44 years.

Thornwell’s next opportunity to shine in the East Region comes versus No. 3 Baylor on Friday.

While producing a mere 13.8 points per game in the 2016-17 season, Hayes’ decision to return to Wisconsin after his junior campaign was thrown under the microscope. Yet the 6-8, 240-pound forward has justified himself in the first two contests of the Big Dance, averaging 17.5 points and nine rebounds per game, as well as shooting a rock-solid 48 percent from the field.

He especially proved his worth with a game-winning layup in the final seconds of the No. 8 Badgers’ win over the No. 1 Villanova Wildcats. Matched up against 6-7, 210-pound Mikal Bridges, a superb on-ball defender, Hayes delivered a tremendous head-fake to spring himself free along the baseline for the lead. Moreover, throughout each game, he flourished from the low post. Surprisingly, the Toledo, Ohio native is only attempting 41 percent of his shots around the rim this season, but that percentage saw an increase over the weekend.

In the Sweet 16, Hayes and the Badgers will square off against the No. 4 Florida Gators on Friday.

Beachem shouldn’t be solely blamed for the No. 5 Fighting Irish’s second-round exit in the Big Dance, but his shooting woes impacted the team greatly in its loss to No. 4 West Virginia, as he went 2-of-14 from the field. Considering the 6-8, 201-pound forward shot 42.2 percent during the regular season, coach Mike Brey and Co. couldn’t afford his worst shooting performance of the campaign with their season on the line.

On top of that, Beachem’s struggles stretched out beyond Notre Dame’s loss to the Mountaineers, hitting just one three-pointer (eight percent) in two tournament games. Overall, he averages more than two triples per contest. Despite those woes, he’s still expected to go late in the second-round of the NBA Draft on DraftExpress. However, Beachem’s stock could take a hit if others, like Kansas Jayhawks guard Frank Mason, continue to carry their squads on a deep run in March.

Washington actually performed well in the No. 6 Bearcats’ first-round win over Kansas State, producing 16 points on an efficient 5-of-6 from the field, but the program’s second-leading scorer (13.1 ppg) looked out of sync in a 12-point loss to No. 3 UCLA. Rather than attack the paint, the 6-9, 230-pound junior settled for contested jumpers, including three attempts from beyond the arc. This season, he hoisted up less than one three-point attempt per contest.

In total, Washington amassed only four points on 2-of-10 shooting in 29 minutes. On top of that, he didn’t even earn a trip to the free-throw line. Even though a masterful performance from the Minnesota native most likely wouldn’t have been enough to push Cincinnati past the vaunted Bruins’ offense, his inefficiency presented UCLA with numerous opportunities in transition. If coach Steve Alford’s group was forced into more half-court sets, the Bearcats could’ve exhibited their elite defense, ranking No. 10 in defensive efficiency in the country (.91 points per possession).

Nevertheless, Washington will return to Cincinnati next season in hopes of a longer stay in the NCAA Tournament.