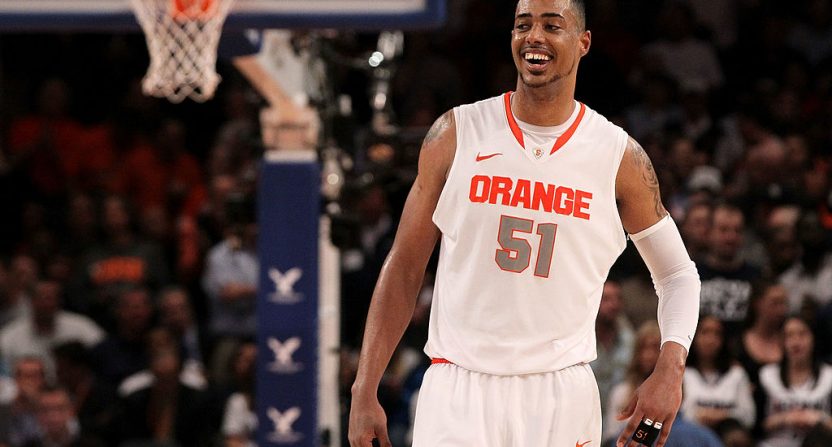 When Syracuse University signed five-star recruit Fab Melo in 2010, it knew it was getting a star basketball player who couldn’t do college work.

That is no knock on Melo’s intelligence; rather, it’s a simple fact for someone who had barely had time to learn English. Melo grew up in Brazil, and after being discovered as a potential 7-foot tall basketball prodigy, he was shipped to America to learn the sport and get a head start on his academics, spending two years at a high school in Florida. That’s two years to become proficient in English and get college-ready.

Syracuse, of course, knew that Melo couldn’t possibly be ready for college-level work with that quick of a turnaround. Coach Jim Boeheim knew that he was getting a basketball player, not a student. But the National Collegiate Athletic Association, under the guise of amateurism, requires that schools pretend that its athletes are students first, so as to have an excuse to profit off their labor without paying the players.

So, in order to pretend Melo was a typical student while also profiting off his basketball skill, Syracuse cheated for him.

The Orange did whatever they could to keep Melo eligible, whether that was pressuring academic officials to give him second chances, or straight-up doing his work for him. In the end, he missed a number of games for academic problems and declared for the NBA Draft after his second year, because he basically had no other choice.

For its part, Syracuse was handed a penalty by the NCAA, but the Orange still got the publicity Melo helped usher in, with a No. 1 ranking and an Elite Eight berth. They sold his jersey, that so many (including this author) bought. His star power helped them set an NCAA attendance record. Melo, on the other hand, struggled in the NBA and returned to Brazil, where he died suddenly on Saturday at the age of 26.

Melo is a tragedy of the American basketball system, but he is also a poster child of how the NCAA system fails athletes.

Theoretically, schools are only supposed to recruit players who can do the academic work in college, but in an industry that is so lucrative—worth over $100 million annually to many power conference schools—the potential to make money causes schools to find a way to work around that ideal than actually limit recruiting to athletes capable of doing college-level work.

“It’s just part of the culture,” said Mary Willingham, a former learning specialist at North Carolina, who blew the whistle on the Tar Heels’ academic fraud scandal. “We’re all cheating, all of us across the country, because the pool of athletes we’re all recruiting, they’re all coming from an underprepared background. It would be like offering me a scholarship tomorrow to go to medical school. But I’m just not prepared, so it would be a worthless scholarship to me.”

Melo was the ultimate example of an athlete who very clearly could not do the work, and yet was used for his talent. However, this is an epidemic even for athletes who graduate, because their degree is nothing but a piece of paper. Willingham called herself a “schedule engineer,” because her job was to essentially find mismatched classes with no academic purpose that would help keep athletes eligible. Even those who can take advantage of the academics in college see their teammates earn millions for their school and get little in return.

“A lot of (players) would go through this academic machinery in their colleges and be spit out at the end of that machinery, left torn, worn and asking questions, with really no guidance on where they should go,” said Myron Rolle, a Rhodes Scholar and former Florida State football player. “No purpose, no idea of their trajectory, and sometimes left with a degree in hand that didn’t behoove any of their future interests.”

While some academics would like to create a system in which colleges only recruit athletes who are college-ready, the money dictates that’s never going to happen. So rather than pretend that athletes like Melo can do the work, schools should create class schedules that help them succeed.

However, the NCAA and its colleges are only allowed to get free labor from Melo and players like him because they have convinced the courts that athletes are students first. Acknowledging that they need to revise their academic services to help athletes would risk the courts realizing college basketball is a business, not an education-centric system. That would mean the NCAA and colleges having to share their hundreds of millions of dollars with the people who produce it. And that isn’t a risk the NCAA or the colleges are willing to take.

So the NCAA won’t change the rules, and schools with an opportunity to recruit star athletes—just like Syracuse’s opportunity with Melo—will continue to do so, because the monetary reward is worth the risk of a penalty.

Under the current system, Melo couldn’t receive a proper education. He couldn’t stay in college basketball until he was ready for the NBA. There is a way to change that, but it would require the NCAA and our universities to put aside just an ounce of their self-interest. If history is any indication, the money guarantees they won’t.