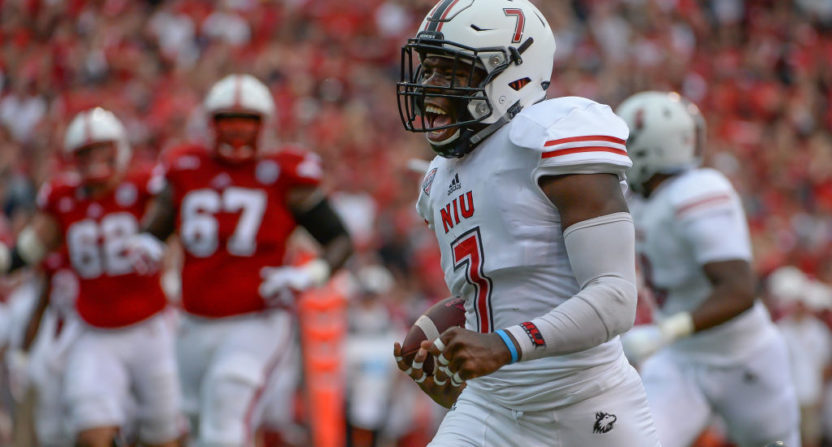 A week after a rough loss at Oregon, the Nebraska Cornhuskers were looking forward to getting back to the friendly confines of Memorial Stadium in Lincoln. A home game against the Mid-American Conference’s Northern Illinois Huskies was supposed to be the perfect chance for a rebound, but the Huskies did not show up to be pushed around by a Big Ten team looking to regroup before heading into conference play.

The Huskies not only showed up for a game, but walked away with a 21-17 win, forcing three turnovers and returning two of those turnovers for touchdowns. It was a new low for a once-proud Nebraska football program, which had never previously lost to a MAC team.

NIU stunned Nebraska early on, turning what looked like a drive for some sure points for the Huskers into a 7-0 lead for the Huskies.

Transfer quarterback Tanner Lee was picked off three times, with two of those being returned for touchdowns in the first quarter. The Huskers never recovered. And if the thought of Nebraska falling behind by two touchdowns in the first quarter at home against a team from the Mid-American Conference and being unable to recover from that sounds odd, that’s because it is. Despite managing to battle back and take a lead in the fourth quarter, the Huskers were unable to hold off NIU in the end, even with Les Miles rooting for them in the booth.

No need to say anything more

The instant reaction is to call this the worst loss under head coach Mike Riley. That may not be an exaggeration, because this isn’t even that good of a NIU team that came in and celebrated a win in Lincoln. Yes, Northern Illinois is now 4-1 in their last five games against the Big Ten, but this doesn’t look as strong as some past Huskies’ teams. Maybe I’ll be wrong about that moving forward, but NIU lost to Boston College in the first game of the season.

The 2017 season has not gone well for Nebraska at all. In the season opener, Nebraska came away with a 43-36 victory at home against Arkansas State that failed to inspire much confidence in the Huskers out of the gates. The following week, Nebraska dug themselves a huge first half hole by trailing Oregon 42-14 at halftime before the Ducks eased up in the second half. Few were fooled by the 42-35 final score, but the hope was Nebraska calmed the offense down and could return home to keep that going.

And now Riley, who just received a one-year contract extension through 2020 this week, has Nebraska in the difficult situation of entering conference play in need of five more wins simply to go to a bowl game. And one glance at the remaining schedule will show getting to five wins the way Nebraska is playing could be quite the uphill battle. They have games against Wisconsin, Ohio State, Iowa, and Penn State down the road, as well as pesky Northwestern and a supposedly-improving Purdue.

With this loss at home to NIU, Nebraska MUST win FIVE of their remaining games to go to a bowl game. Here’s what they have in front of them. pic.twitter.com/k1blIaJmL9

It’s time for Nebraska to start doing some looking in the mirror and figure out how they can fix everything that needs to be fixed. If they don’t make some quick changes, it could be a long year for the Huskers, and Riley’s seat will get uncomfortably warm in Lincoln.