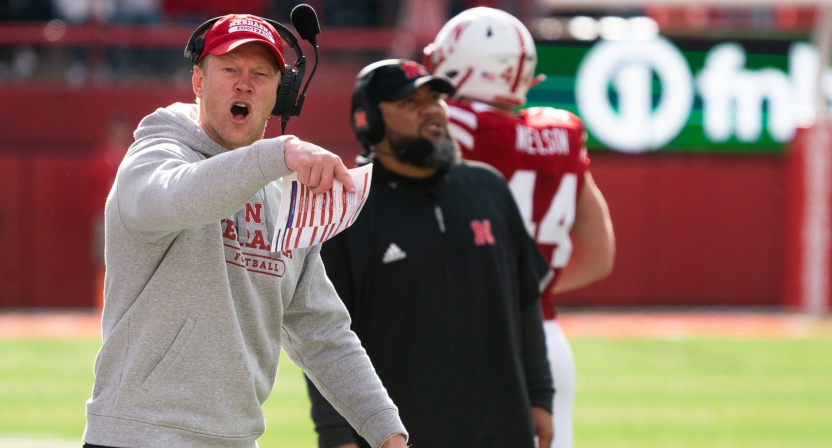 The Nebraska Cornhuskers’ 2021 football season has appeared particularly cursed, and Thursday’s 28-22 home loss against the Iowa Hawkeyes exemplified that. It was the Huskers’ eighth one-score loss this season, and their ninth loss by less than 10 points. It dropped them to 1-8 in Big Ten play. But they finished that conference schedule with 239 points for and against. So that led to a lot of Twitter commentary:

Earlier we tweeted it would be funnier if Nebraska won this game. We apologize for the error, it is definitely funnier if they lose in heartbreaking fashion.

Nebraska finishes 1-8 in Big Ten play with a score differential of 0.

Lost seven games by one score and one by nine. Beat NW by 49.

Nebraska is the first team in college football history to lose 9 games by single-digits margins in the same season. They went (1-8) in the Big Ten, and their combined scoring margin in those gms was 0. Lost 8 by 49 pts, beat Northwestern by 49 points.

Me: Original Sin is fake

There is just no way to say it without sounding like a dick, but Nebraska is going to be the best 3-9 team ever

Is the Iowa-Nebraska Heroes Trophy named after the people who watch all four quarters?

Nebraska was up 22-6 near the end of the third quarter, but then things really went off the rails. A field goal from Iowa’s Caleb Shudak cut the lead to 22-9 with 36 seconds to go in the third, then the Hawkeyes blocked a Huskers’ punt and returned it for a touchdown, making it 22-16 after the convert:

BLOCKED AND TAKEN IN FOR THE TD ✋😤@HawkeyeFootball is right back in this game 🔥 pic.twitter.com/GajiCxmCR7

Following that, Nebraska quarterback Logan Smothers (starting in place of the injured Adrian Martinez) took an intentional grounding penalty in his own end zone, producing a safety. Shudak then hit another field goal on the ensuing Iowa drive to make it 22-21, and the Hawkeyes’ defense then forced a three and out. That led to an Iowa touchdown drive, which included a 55-yard run from Tyler Goodson and a two-yard quarterback sneak for the touchdown from Spencer Petras. Nebraska still got the ball back with almost three minutes left, and drove into Iowa territory, but then Smothers threw a game-sealing pick to Jermari Harris, with no Huskers’ receiver even in the area:

That was quite the end to a painful season for Nebraska. On some level, they at least showed some fight this year, and the close losses mean they were at least in many of the games they played. But they still finished 3-9, and that may have further questions (there were already a lot even heading into this year) raised about head coach Scott Frost’s future; athletic director Trev Alberts signed Frost (seen above complaining about a first-quarter call) to a restructured content earlier this month, so there probably isn’t an immediate change coming, but the criticism for Frost will continue to build after this. We’ll see if the Huskers can actually turn some of these close losses into wins next year, or if there’s more pain ahead for them.