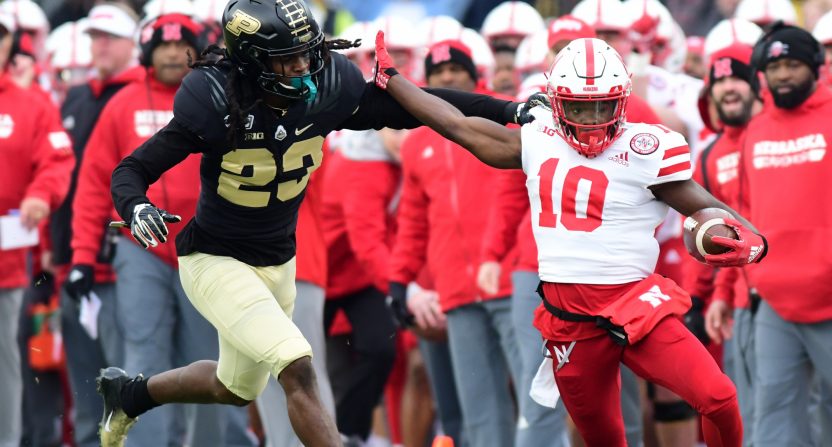 If you had already written off UCF as a potential contender for the New Year’s Six bowl game, the Knights are attempting to have you reconsider them. Sure, they need some help; s they currently trail behind Cincinnati in the division standings, which blocks UCF’s path to a return trip to a New Years Six bowl game for a third consecutive season, but a 44-29 victory over Houston on Saturday keeps the Knights’ hopes alive. In the so-called space game, as UCF was wearing their latest annual gimmick of a moon uniform, there may be a bit of irony that UCF’s former head coach Scott Frost is at risk of coaching his new program, Nebraska, to its first three-year bowl drought since before Neil Armstrong set foot on the moon. And that the Cornhuskers’ latest loss came to Armstrong’s alma mater, Purdue.

Nebraska dropped to 4-5 on Saturday afternoon in what can arguably be described as one of their worst losses in recent memory. That’s quite a thought considering how the losses have been piling up in Lincoln over the past three seasons, but a 31-27 road loss to a Boilermakers team that had just two wins entering November justifies such a harsh reaction. And that’s especially true with Purdue playing without their starting quarterback, losing their new starter during the game, and playing without star wide receiver Rondale Moore .

Losing to Ohio State? Fair enough. Dropping a game at Colorado? It happens. Losing to THIS Purdue team? A line must be drawn somewhere. And Frost’s comments weren’t exactly inspiring:

Nebraska jumped out to a 10-0 lead in the first quarter, but trailed the Boilermakers at halftime, 14-10. Sophomore quarterback Adrian Martinez gave the Huskers a 20-17 lead with a short touchdown run early in the fourth quarter, but the defense was unable to hold it. Twice. Purdue traveled 78 yards to retake the lead on the ensuing possession with a touchdown run by King Doerue, giving the Boilermarkers a 24-21 lead midway through the fourth quarter. On the same drive, Purdue lost quarterback Jack Plummer to a leg injury that Boilermakers’ head coach Jeff Brohm said would likely be a season-ending one.

Already digging deep into the quarterback reserves, Purdue managed to burn Nebraska’s defense once more. After Martinez led the Huskers to another go-ahead touchdown drive, they couldn’t hold on to a 27-24 lead with a little over four minutes to play. Out of nowhere, Boilersmakers’ reserve quarterback Aiden O’Connell began completing short and high-percentage passes to chip away at the Nebraska defense. A 26-yard pass to Brycen Hopkins put Purdue in scoring position, and a well-executed reverse to David Bell gave Purdue the 31-27 lead with just 1:08 remaining.

With one final possession, Nebraska managed just seven yards. Martinez threw three incomplete passes, including one on a fourth down. With just one timeout remaining and 26 seconds to play, this one was over.

Nebraska is now in serious jeopardy of missing out on the bowl season for the third season in a row. In fairness, the first year in this potential three-year bowl drought was coached by Mike Riley, who was replaced by Frost after the 2017 season (when he coached UCF to an undefeated record and a victory over Auburn in the Peach Bowl to stake a claim at a national championship). But the former Husker coming home to save the program was a storyline that now is showing it may have been too good to be true. Writing off Frost and Nebraska is still premature, as he did take over a program that had a good amount of catching up to do, but the results so far have been underwhelming. And it didn’t help that Nebraska was being hyped as a preseason contender in the Big Ten, and not necessarily just within the Big Ten West.

The last time Nebraska didn’t play in a bowl game in three consecutive seasons was when they failed to receive a bowl game invite from 1955 through 1961. The last head coach to miss multiple bowl seasons as head coach of Nebraska was Bill Callahan, who coached bowl-less seasons in 2004 and 2007.

Frost will still be given some time to get things rolling at Nebraska. The program has invested too much to hit the reset button now, and hitting reset on the program with a coaching change is not at all needed right now. But Bo Pelini was fired despite never winning fewer than nine games. At Nebraska, this simply isn’t good enough, or anywhere close to it.

For Nebraska to reach bowl eligibility, the Huskers must win two of their final three games. The good news? One of those games against Maryland. even with as much as Nebraska has struggled, a win against Maryland should be expected. But then again, Nebraska is not in the category of being able to mark any win down as a given.

The bad news? Nebraska’s other two games are against ranked division opponents, Wisconsin and Iowa. The Huskers will at least get those games at home, but all of the empirical and anecdotal evidence collected so far this season comes to the same conclusion; Nebraska is in some deep trouble. And they may well wind up with that bowlless streak continuing.