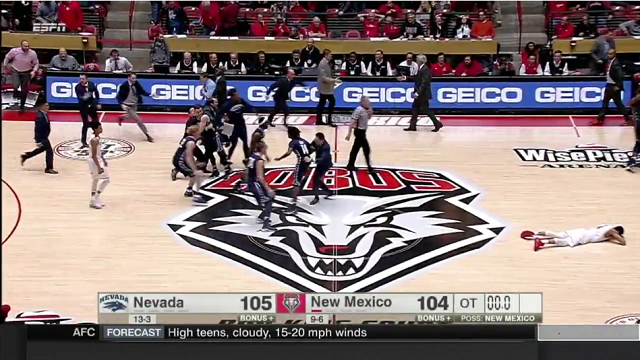 With about 1:15 left in regulation of the New Mexico-Nevada game on Saturday night at The Pit, New Mexico pulled down a rebound leading 90-76. Here’s a screenshot of the Lobos casually setting up for a play with 1:12 left on the clock, up 14 points: 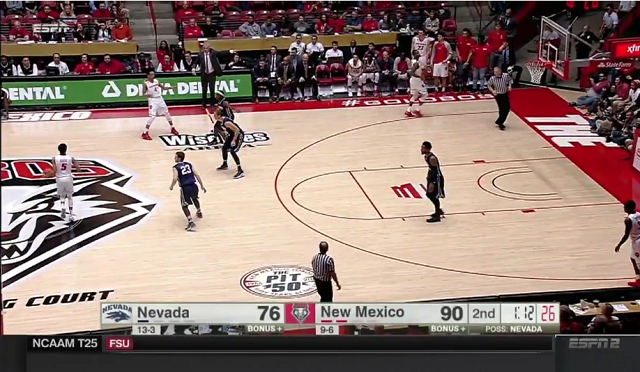 And they lost the game.

So how the hell did this happen? How did a team that was up 14 points with the ball and about 1:10 to go, blow the game? Well, “chaos” is the easy answer. But as you would probably guess, it was mainly a combination of Nevada hitting a lot of three-pointers and New Mexico missing a lot of free throws.

I got some videos on Clippit to give you a video-by-video breakdown of the amazing comeback.

Continuing the scene as you see in the above photo with New Mexico setting up a play just past half-court, Nevada would then steal the ball, and drain a three:

So it’s now an 11-point game with one minute on the clock. Nevada quickly fouls, New Mexico misses both free throws, and Nevada then hits another three with just over 50 seconds on the clock:

We now have an eight-point game, and it’s getting sort of interesting. Another quick foul puts New Mexico at the line, and they hit one this time around to get the lead back up to nine. But, Nevada comes right back down the floor and nails another three. Six-point game:

Well now New Mexico actually makes both of their free throws to go back up six and you’re thinking, “Okay, that’s probably it.” But, Nevada quickly comes down and hits another three. Three-point game!

Still, all New Mexico has to do is hit just one free throw to make it a two-possession game and probably end things in the final seconds. But, of course, two clanks, and Nevada hits ANOTHER three. Tied game. New Mexico would miss the shot to win it, and we have overtime. Unreal:

So then we get to overtime, and New Mexico is up five with 1:12 to go when Nevada draws a foul. They make both free throws and it’s back down to a three-point game. The Wolfpack then get a defensive stop, and a dunk from star sophomore Cameron Oliver:

With 8.7 seconds left, New Mexico goes to the line and makes one free throw to go up 104-102. And you knew what Nevada was going to do next:

That was sophomore Jordan Caroline with the game-winner, for three of his 45 points on the night.

New Mexico led by as many as 25 points in the second half, and Nevada scored 18 points on six three-pointers in the final 1:46 of regulation:

What an absolutely amazing comeback by Nevada, and what a brutal collapse from New Mexico.