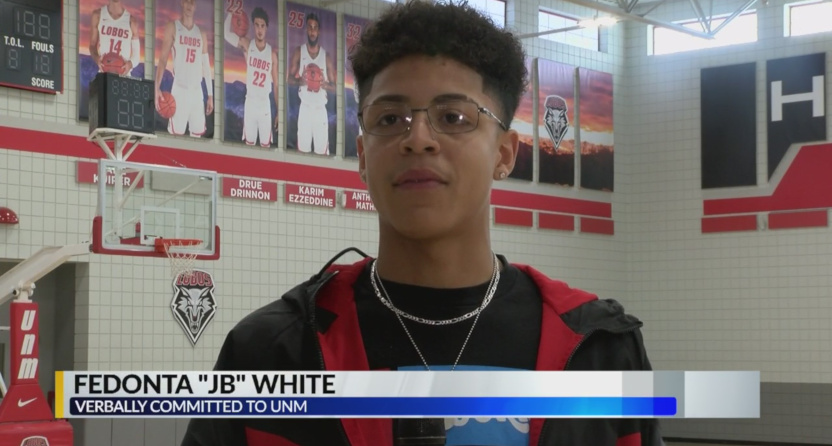 “June Bug” was a week away.

Fedonta “J.B.” White, the star Santa Fe High Demons basketball player who was set to join the UNM Lobo basketball team next week in Albuquerque — the next step in his dream to play professional basketball — was shot and killed early Saturday morning near Santa Fe.

Around 3:30 a.m., deputies from the Santa Fe County Sheriff’s Office responded to calls of a shooting in the Chupadero area, just north of the city of Santa Fe, where officers determined White had died of a gunshot wound.

White had initially been set to graduate high school in 2021, but wrapped up his schoolwork early so he could join the Lobos this fall. He was set to be the first New Mexico high school player who the Lobos gave a scholarship directly out of high school since they did that with Cullen Neal ahead of the 2013-14 season. And as James Barron and Dillan Mullan of The Santa Fe New Mexican write, White’s passing has left a mark on many:

“The whole thing is just surreal,” [Santa Fe High principal Carl] Marano said. “He was an incredible young man who was getting ready to fulfill his dream and be a Lobo.”

Adrienne Cole, the wife of Santa Fe High head boys basketball coach Zack Cole and a cousin of White, said the family did not want to comment about White’s death.

“Our entire family is devastated,” Adrienne Cole said. “We need lots of prayers, all of us.”

…Christian Kavanaugh, a 2019 Santa Fe High graduate who played with White on the state runner-up team, said White’s death was an unbelievable end to a story that could have been so good.

“I was telling myself this is crazy,” Kavanaugh said. “This guy has the brightest future and nothing can get in his way. It was horrible because he had so much potential and the biggest future ahead of him. He was so young and he was going to make his way out of here. He was going to do big things.”

That was further illustrated on Twitter Saturday, with many in the New Mexico basketball community, including Neal, paying tribute to White:

Unbelieveable. I didn’t know the kid, but I’m absolutely heartbroken by this news. Rest In Peace, JB White. Prayers are definitely going out for him, and his family !

Here are some of the other tweets about White:

Heartbreaking news. JB was a great young man and basketball player. Lobo Nation was very excited to welcome him to the team. Our thoughts are with all of JB's friends, family, teammates and classmates.https://t.co/4b6jMxUHsI

UNM statement on passing of J.B. White: "We are deeply saddened by the tragic news of the passing of JB White. He was an extremely talented student-athlete and we were looking forward to him joining the Lobo Family."

Hard to find the words to react to such devastating news. Thoughts are with J.B. White’s family and friends. Heartbroken and just left wondering why?

Rest In Peace J.B. White💔🕊you were taken from this world too soon, You where a big inspiration to me and basically everyone in New Mexico.Everything I do in basketball will be for you:all the suicides,every free throw, every layup,every 3 pointer,every minute is for you.8/1/20 pic.twitter.com/NuAdUiIwnZ

Our thoughts go out to White’s friends and family.

[The Albuquerque Journal; photo from KRQE]