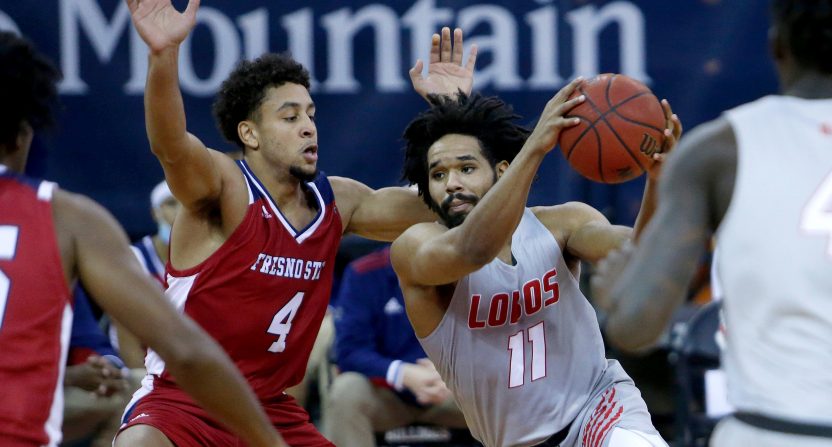 And the Albuquerque Journal reports that the Lobos may be done playing this season altogether, while adding that there are no known positive COVID-19 tests within the New Mexico program.

There is no indication there are current positive COVID-19 cases in the Lobos program, and there is also no indication if the Lobos (5-11, 1-11 Mountain West Conference) will play again this season.

Now, that doesn’t mean that there *aren’t* positive COVID-19 tests or close-contact concerns, of course. But opt-outs appear to be a big part of this. Three New Mexico players had already opted out of the season (with one of them transferring) since August, and the Albuquerque Journal reports that at least two more players appear to be opting out. What’s also interesting in the report is that the opt-outs may not be “entirely by [the players’] choice but at the urging of the staff.”

Sources have confirmed to the Journal that at least two more players either already have or are on the verge of announcing their opt-outs for the remainder of the season, and maybe not entirely by their own choice but at the urging of staff.

Those players would be in addition to the three who already have left since mid-August — senior guard Zane Martin (transferred to Towson in the weeks prior to the fall semester starting) and, during this season, senior guard Keith McGee and freshman point guard Nolan Dorsey. Each publicly cited either uncertainty with or mental health concerns related to UNM’s season situation as part of the reason for leaving, but other than their social media posts, none of those players has talked with media to elaborate on the decisions.

Mental health is a significant, frequently overlooked thing always, and especially during a pandemic. And especially when talking student-athletes. These are 18-to-22-year-olds who aren’t getting paid to play college basketball (and very few of them will ever get paid to play basketball).

And New Mexico’s situation has been a particularly rough one for the players to deal with. The Lobos’ home games haven’t even been played in New Mexico due to the state’s public health order preventing in-state games during the pandemic. Instead, they’re playing home games and practicing in Lubbock, TX.

Additionally, the team — coached by Paul Weir — has performed terribly. New Mexico is 5-11, coming in at 280th out of 357 teams on Ken Pomeroy’s college basketball ratings (New Mexico was an acceptable 138th last season). The Lobos are 1-11 in conference play, with their only victory coming against a San Jose State team that ranks 319th on KenPom (and New Mexico lost a game vs San Jose State too). It’s been a historically awful season for a typically solid basketball program.

So, it’s easy to see how the players — and perhaps the staff — wouldn’t want to keep playing basketball in what seems like a very miserable situation, on top of what’s been a generally miserable situation for most everyone anyway during the pandemic.

New Mexico’s next scheduled series — the Mountain West is going with two-game series over three days this season — comes Feb. 9 and 11 at the Colorado State Rams, who — like San Diego State — are challenging for the regular-season conference title and are currently on the NCAA Tournament bubble. That’s also a thing to consider here: what missing out on these games means for teams that actually have a lot on the line this season; granted, there’s probably not a whole lot of value for the tournament résumé in beating New Mexico right now.

We’ll see if New Mexico is able to/chooses to play Colorado State, along with series against Wyoming (in Lubbock) and Air Force after that (and then there’s the Mountain West tournament to consider).

UPDATE: New Mexico head coach Paul Weir spoke to the media on Wednesday, and said that the team’s “intent is to play Colorado State.”

"Our intent is to play at Colorado State." — Lobos coach Paul Weir

But it’s very possible that things don’t improve enough on their end in six days (and sooner than that in terms of needing to make a decision on the games). Weir said that the Lobos are currently down to five scholarship players available at the moment.

Down to 5 scholarship players available (I thought it was 6).