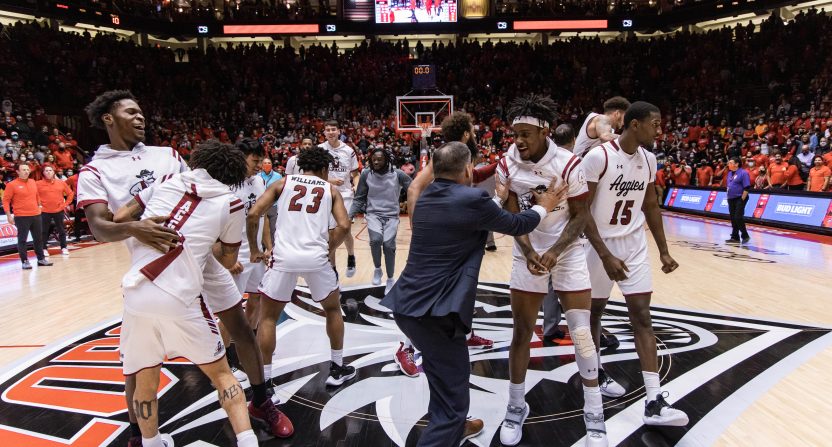 There’s always drama for the New Mexico-New Mexico State Rio Grande Rivalry, but things went to another level on Monday night at The Pit in Albuquerque.

The game was tied 76-76 in the final seconds, when New Mexico State’s Nate Pryor made a wild shot with his back to the basket for a buzzer-beater, giving the Aggies a 78-76 road victory.

New Mexico State players then went to center court and stomped on the Lobos’ logo while the home crowd booed. They even allegedly spit on the logo. New Mexico athletic director Eddie Nuñez rushed onto the floor to stop the Aggies’ players.

• NMSU circus shot goes in at buzzer then Aggies stomp on Lobo at center court. AD Eddie Nuñez goes out there to get them off.
• Series splits 1-1 pic.twitter.com/rGy5TZi76K

The logo-stomping was seemingly because of New Mexico State being unhappy with how New Mexico players acted on the Aggies’ court last Tuesday, when the Lobos won 101-94.

Chris Jans on the postgame situation with his players stomping on the Lobo logo and spitting on the court after beating UNM in OT: He does not condone it, but did show video last couple days of Lobo players doing similar things in last week's win in Pan Am.

NMSU beats UNM 78-76 in OT to split the Rio Grande Rivalry. Aggie players saying now in postgame that the stomping on center court and celebration was, at least in part, a response to what they feel Lobo players did in the Pan Am last week. (@ABQJournal pics by @msandovalphotos) pic.twitter.com/R9bI25Stxv

In the following clip, you can see a New Mexico player making a kicking motion and another player slamming the ball down at center court, as well as a player picking up the ball and dribbling in front of a camera:

For comparison's sake, here is the postgame from last week in the Pan Am Center. There was also talk of players talking trash to students, but I don't care about player/student section interaction in the slightest. https://t.co/O5oqaPdiZu

But if that’s all it was (and to be fair, only so much can be seen in that video), New Mexico State’s response seems a bit extreme.

How did first-year New Mexico head coach Richard Pitino feel about the court-stomping?

“I’m more offended by our defense in the last play,” Pitino said.

UNM @LoboCoachPitino on the postgame situation: "I'm more offended by our defense in the last play. I'm not gonna worry about other people's team. What I know is we had a couple breakdowns down the stretch that cost us an opportunity to sweep New Mexico State. We didn't do it." https://t.co/CV7L8XHJVE

So, each team got a road victory to split the series, and the rivalry is now more heated than ever.

New Mexico State improves to 7-2 on the season with the win, while New Mexico falls to 5-4 with the heartbreaking loss.