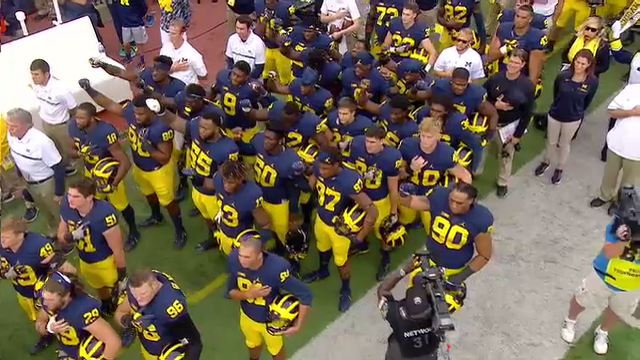 If there is a Mount Rushmore for “You Missed The Point Entirely” decisions, the NFL owners’ decision to penalize players who kneel or otherwise “disrespect” the national anthem before a game has to be up there. The NFLPA is already on red alert to push back against any over-the-line punishment and it’s a reminder that the league likes to treat its players like children rather than adults with free thought.

We won’t know the full ramifications of the policy until the season starts and enforcement begins. The idea of what “disrespecting” the anthem looks like appears to be a jumbled mess and you can expect that this won’t have the intended effect the NFL hopes it will.

However, there’s another group of football players who are sure to feel some of the aftershocks of this decision as well. College football players haven’t staged very many national anthem protests, but the controversy surrounding the issue and clear disdain that NFL owners have for it are going to impact them in various ways, big and small.

It Could Embolden Schools to Make Similar Rules

When football players started protesting the national anthem in order to bring awareness to social injustice and inequality, coaches and administrators were mostly vague on the issue. Most of them voiced support for freedom of expression but balanced it with an appreciation of what the national anthem stands for. One coach noted that, so long as protests are peaceful, this is America where people have the right to protest.  Another was slightly more direct, noting that while they might not prevent a player from protesting, “there are consequences to everybody’s actions.”

In a few places, coaches and administrators took things a step further. One Division III college kicked a player off the football team after he knelt during the anthem. Some other schools, mostly small religious ones, officially banned players from kneeling during the anthem. In a reaction-to-the-reaction, the National Association of Intercollegiate Athletics (NAIA) moved its 2018 DII basketball championship tournament from the College of the Ozarks after that school banned players from protesting the anthem.

All of which is to say that different coaches, admins, and universities treat the situation differently and there’s no clear guideline moving forward. It’s extremely unlikely that any public or state university is going to get into the business of telling football players they’re not allowed to kneel during the anthem (and risk the wrath of Constitutional lawyers). However, it’s entirely possible that more private schools could move to align with the NFL policy. They might do so not out of their own belief but as a way to “protect” players from negative reactions or commentary. Of course, doing so would rob college students of the ability to make decisions for themselves, but if the NFL says it’s okay, some colleges might agree.

Ultimately, most schools perform the national anthem while football players are still in locker rooms. We have to imagine that will continue, but it also begs the question of whether or not schools will ensure that is always the case in order to limit protesting opportunities.

The NCAA can say whatever they want but most student-athletes playing college football are hoping for a chance to play in the NFL one day. Some have better shots than others and those players often start thinking about all of the ways that NFL teams look at them very early on.

You can be sure that NFL owners (and their scouts) are keeping a running tally of every player who kneels or protests in some form during the anthem from here on out. Players from Michigan, Michigan State, and Nebraska are just some who knelt in solidarity last season and you have to imagine it will be on their minds that doing so again could possibly endanger their draft status in some way if they’re seen as a liability by NFL teams and owners.

It’s a sad thing that players have to balance their potential future employment against standing up (or kneeling down) for what they think is right, but the NFL is a private entity and, for better or worse, can make their own rules most of the time. If you’re a good talent on the fringe of getting picked by an NFL team, having a protest or two on your “record” could possibly be the difference between getting selected or not.

We already know that “anonymous NFL scout” comes up with the dumbest reasons possible to pass a guy over. We also know that certain team owners are dead set against letting players on their team protest. With those two things in mind, it’s really going to push college players to challenge their convictions when deciding whether or not to take a knee.

It’s Going to Force Coaches To Have Actual Opinions

Firat things first, plenty of major college coaches have provided clear opinions on how they feel about player protests. Nick Saban said that while he personally would not want to disrespect the “symbols that represent the values of our country,” he believes in freedom of expression. Michigan’s Jim Harbaugh was pretty adamant in the right of people to protest while Washington State’s Mike Leach said he didn’t understand what the protests were actually about.

Say what you want of those opinions but at least they’re opinions. Other coaches like Jimbo Fisher and Syracuse’s Dino Babers tried to toe the line by having non-opinion opinions.  That option probably isn’t going to work much longer.

The truth is that by trying to muzzle player freedom of expression, the NFL has succeeded in making sure this will remain a huge issue in 2018 and beyond and is basically daring players to up the ante on their protests. That’s going to have a trickle-down effect on the college level and might even lead to an increase in protests here where there aren’t strict rules. That’s going to put the focus back on coaches to actually present opinions and clear ideologies when it comes to freedom of expression and how it correlates to their football team. They can say they don’t allow it, they can say they’re cool with it, but either way, they have to say something.  It’s going to keep coming up in post-game pressers. It’s going to keep coming up in interviews. It’s going to keep coming up on the recruiting trail. Coaches who continue to try to play both sides (or no sides) are going to get left behind.