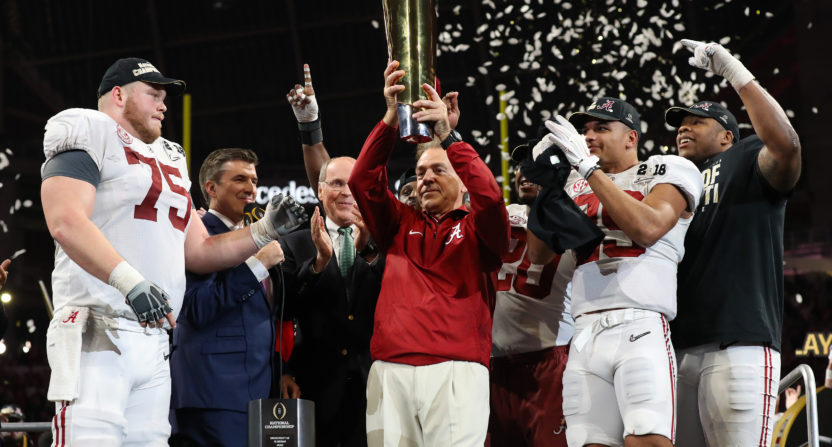 Just as they have time immemorial, Sports Illustrated has published their special commemorative issue to celebrate the 2017 Alabama Crimson Tide football team for winning its fifth national championship in nine years. The cover shows current head coach Nick Saban adorning the houndstooth fedora that is intrinsically linked to the man considered by many to be Bama’s greatest coach of all-time, Bear Bryant.

Emotions run deep when it comes to Tide football, so when Birmingham radio host Jim Dunaway saw the cover, he was quite offended.

Certainly, we can discuss the merits of the Photoshop job. It’s a little unclear if Dunaway is bothered by the comparison between the two coaches because they are both great in their own rights or if he feels that Saban isn’t worthy of being compared to Bryant. If it’s the former, that’s a reasonable take given that they coached in different eras and oversaw entirely different versions of the sport.

If it’s the latter, well, that’s where things get a little dicey. Because the truth is that Saban has almost certainly surpassed Bryant in terms of what he’s been able to accomplish as head coach of the Alabama football program.

This isn’t a hot take outside of Tuscaloosa. Lots of national pundits are already well-aboard the Saban Train in this argument.

Gotta be honest, I didn’t think much about the Saban-Bryant theme this year. In my mind Nick surpassed Bryant awhile ago. https://t.co/r5QVO590th

While it’s natural that loyal Bama fans will take it as some kind of slight against the coach they’ve admired and idolized for decades, there’s simply not much denying that Saban is now No. 1 on that arbitrary list of all-time coaches.

There’s no denying that what Bryant accomplished between 1958 and 1982 was legendary. Six national titles and 14 SEC titles is an amazing haul in any era. And when you look at Alabama’s record between 1971 and 1980, it’s astounding. The Tide won double-digit games in all but two of those seasons and ended the year outside the Top Ten only once (at No. 11). His 232–46–9 record with the school is the reason we’ve named a stadium, trophy, and many other things after him.

But even the most strident Bear devotee has to admit that this was a different era, and, arguably, an easier one in which to create a dominant program. College football was big but it wasn’t what it is now. It certainly wasn’t the cutthroat billion-dollar business that it’s become. The recruiting demands, the national exposure, the media spotlight, the huge contracts, the shifting demographics, conference championship games, and the whims of modern life all make it nearly impossible to create a dynasty that lasts even five years, let alone 25.

And yet, we say “nearly impossible” because Nick Saban has figured out how to surpass that unreachable plateau and double it. After taking over a Tide program in decline in 2007, he almost immediately turned them back into the powerhouse that Alabama is expected to be.

By 2008, Alabama was winning 12 games in a season. By 2009, he had his first national title with the program. He would return to the national title game five more times in the next eight years, creating a run that is unrivaled in modern college football (1980 forward). By defeating Georgia in the College Football Playoff title game, he notched his fifth title with Alabama and sixth overall (LSU, 2003), tying him with Bryant.

Nick Saban: wins 6th national title, tying Bear Bryant for the most by a head coach in Poll Era (since 1936) pic.twitter.com/2tnTZj2YbM

Oh, and Saban isn’t done. Not by a longshot. Alabama is already the odds-on favorite to repeat again next season. Nothing is ever guaranteed but you can assume that so long as Saban is at the helm, Alabama will be in the title picture. That only gets more impressive when you look around at Saban’s and Alabama’s contemporaries that have come and gone throughout this dynastic run.

Oregon fell off the map, Notre Dame is often overrated, Ohio State is always in the picture but rarely matches up, Auburn has good years and bad years, and Georgia needs to prove they’re going to stick around. Clemson, the program that beat Alabama for last year’s title and is likely to challenge the crown again next season, has still lost to the Tide in two of the last three College Football Playoff match-ups.

As our Kevin McGuire recently said, “good luck, college football world, because Alabama is not about to fade away anytime soon.” And with each passing season, conference title, and national title, his legendary status is only going to grow.

Ultimately, it’s not that what Bryant accomplished is lessened by Saban. It’s simply that Saban’s body of work is as impressive, if not more so than Bryant’s, because of the era in which he’s accomplishing it. It was a different game back then but in many ways, it was a simpler game, too. College football is a business now. And there has never been a CEO quite like Nick Saban. The man can wear anybody’s hat anytime he wants. He’s earned it.