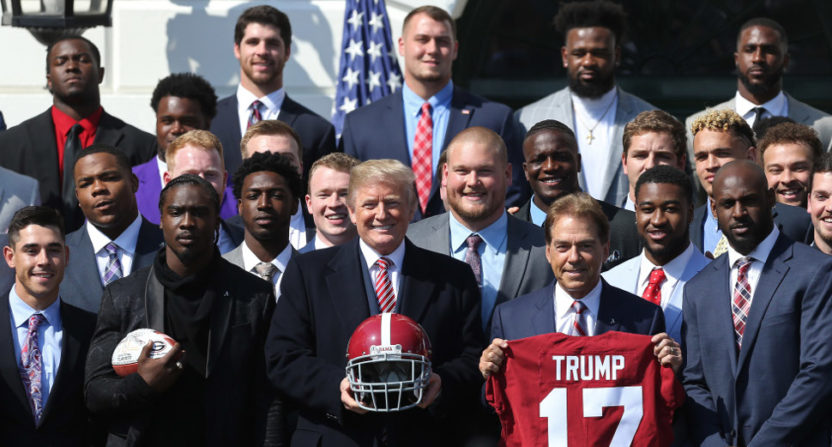 The Alabama Crimson Tide football team’s visit to the White House Tuesday in the wake of their College Football Playoff championship produced some headlines on a couple of fronts. For one thing, head coach Nick Saban used this as a recruiting pitch, because of course he did:

Nick Saban tells me he called recruits from the White House.

But beyond that, the Tide received quite the comments from President Donald Trump:

“Anyone who wants to know how Alabama does it, they should study coach Saban’s simple philosophy,” Trump said in the event, which was streamed on the White House YouTube channel. “It’s called ‘The Process.’ Coach tells his players ‘don’t look at the scoreboard, don’t look at any external factors, just focus on your efforts, on your toughness and all your discipline on executing each play, one play at a time. By doing that, by focusing on the process, the outcome — winning — will take care of itself.”

…Trump complimented Saban, the staff and the players for their ability to persevere through the adversity they faced at Mercedes-Benz Stadium against Georgia in January.

“I was watching, and I said ‘coach, not looking too good,'” Trump said. “Down 13-0 at halftime to a great Georgia team, these champions fought back as they did all season long, and kept fighting and fighting.”

And what really got noticed were Trump’s comments about Saban’s departure from LSU, where, as it was pointed out, one of his six national championships (2003) came from:

“They shouldn’t have let you go, coach. They’re thinking about that, too.”

Yet, LSU definitely did not “let Saban go,” as he chose to leave for the NFL’s Miami Dolphins following significant pursuits from other teams and a reportedly-massive offer (plus the promise of significant control). Of course, there are plenty of semantics that can be brought into play there, such as the possibility that Saban would have stayed at LSU if the Tigers had offered him even more money or a longer-term deal, and “the circumstances under which the coach visiting the White House left a previous job over a decade ago” are far from the most important thing for the president of the United States to know. But it’s still notable that Alabama’s visit to the White House created all these headlines.